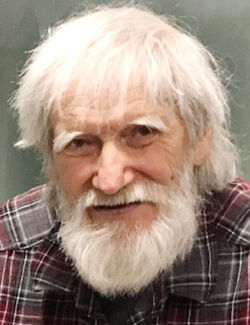 Daniel Kindle O'Connell RUTLAND — Daniel Kindle O’Connell of Rutland, Vermont, died on Nov. 2, 2020, of metastatic prostate cancer, at the age of 81. Dan was never one to follow the expected path, and he enjoyed reflecting on the many adventures that he had the good fortune to experience throughout his life. Born in New York City, his family moved to Vermont when Dan was 6. He married his childhood sweetheart, Geraldine Wiley, and raised a family in South Londonderry. His later independent adventures sometimes took him away from Vermont, but he always returned, making his home in Norwich, Coventry and Wallingford. His final decades were spent in Rutland, where he was an active volunteer and community member. An Air Force veteran, Dan was trained as a radar equipment specialist, which gave him a lifelong interest in electronics and a wealth of knowledge regarding ham radio and electronic tinkering which he loved to share. An early adopter of many new technologies, Dan was a TV repair technician, co-founder of a small cable company and developer of color inkjet printers. He was an inaugural member of the MINT, Rutland's Makerspace. He also enjoyed the natural world as a maple sugarer, Master Gardener and lover of thunderstorms. Due to Dan’s varied and eclectic interests, he was known to many people in many different ways. He was “Grampa Dan” to his grandchildren, who were lucky to investigate the world with him as young children, exploring museums, playgrounds, mud puddles, and ropes and pulleys in the backyard. He was the sexton of the Arlington (Massachusetts) Unitarian Universalist Church and later, Buildings & Grounds at the Unitarian Universalist Church of Rutland, where he was still an active member attending Zoom services even in his final days. Many who knew and loved Dan met him over some volunteer project. He was an usher for the Paramount Theatre. He helped build the Vermont Farmers Food Center from ruins. He filmed for PEGTV during the Occupy Rutland movement, and he volunteered for the Solar Festival. He was spry well into old age and still walked and rode his bike all over the city. As a lifelong learner, he was well-known at libraries around the state. He will be remembered fondly as a master storyteller and troubadour, who enjoyed performing with the Rutland Curbstone Chorus. The family extends heartfelt gratitude to his caregivers at St. Joseph Kervick Residence, his home since 2018, and at Rutland Health & Rehab, as well as the nurses and doctors at the VA Clinic and Rutland Regional Medical Center. They especially acknowledge his Rutland “surrogate family,” Kathleen and Wayne Krevetski, who showed such loving care for him. Dan is survived by his daughters, Kathleen O’Craven of Toronto, Ontario, and Susan O’Connell (Craig) of Hardwick, Vermont; grandchildren, Morgan O’Connell, Jill O’Craven, Rylan O’Connell and Reese O’Craven; and brother, Ferris O’Connell. Dan was always one to lend a helping hand whenever and wherever it was needed. In lieu of flowers, consider stopping to help someone with car trouble, or shoveling the walk at a church or library, or sharing a skill with someone. An online guest book can be found at https://www.cliffordfuneralhome.com/obits.

I'm so sorry to learn of Dan's passing. He was the sweetest gentleman and it was my pleasure to care for him when he came to our clinic. He will be missed. Sympathies to his entire family. Peggy Stattel