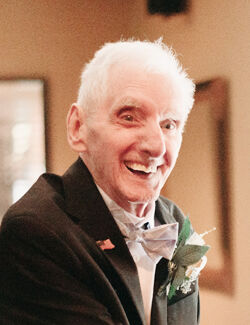 Earl A. Bonneau SPRINGFIELD — Earl A. Bonneau, 89, passed away on Feb. 16, 2021, at the Bay Pines VA Hospital in St. Petersburg, Florida. He was born on May 19, 1931, in Claremont, New Hampshire, to his loving parents, Earl and Yvonne (Jutras) Bonneau. He was the oldest of two children. He grew up in Claremont and graduated from Stevens High School in 1949. After graduation, he served in the Air Force for three years until 1952. After the service, he married Fern Santaw on Nov. 3, 1952, in Claremont, who predeceased him, along with their daughter, Cindy; they had three children together. Earl worked as the produce manager for A&P for many years in Claremont and Keene, New Hampshire, and in Springfield and Greenfield, Massachusetts. Earl married Edris Bryant in Springfield, Vermont, on Oct. 3, 1970. They met during square dancing one evening and it had been history ever since. Earl loved many things in life; he always had his peppermints nearby, wore his favorite blue sweater, and his favorite iced tea, to name a few. The years he shared with his beautiful bride were his most precious. The two love birds shared their 50th Wedding Anniversary this past October. Their marriage was a true testament of what true love and a marriage commitment is. They enjoyed their time at the senior center in Springfield, traveling, square dancing, shuffleboard, bowling, playing cards and being with friends and family. Earl is survived by his loving wife, Edris of Springfield, Vermont; sons, Stephen Bonneau of Claremont, New Hampshire, Leonard Gendron of South Hadley, Massachusetts, Paul Gendron of Sarasota, Florida; daughters, Diane Haskell of Chicopee, Massachusetts, Nancy Carle (Richard) of Ludlow, Vermont, Diane Stewart; grandchildren, Cami Koski, Christopher Gendron, Michael Gendron, Stephen Carle, Renée Gendron-Potwin, Rick Carle (Becky), Karen Carle, Amanda Gendron-Roese (Michael) and Melissa Kowalsky (Bryan); and great-grandchildren, Jaxson, Noah, Tristan, Ryelee, Alton, Jacob, Abigail, Juliette, Rylan, Adalyn and Dalton. Visitation will be held Wednesday, Feb. 24, 2021, from 10-11 a.m. with a service beginning at 11 a.m. at Davis Memorial Chapel in Springfield, Vermont. A spring interment will be held at a later date and time in Ludlow, Vermont. Contributions in his loving memory can be made to the American Lung Association, c/o Donations, 55 West Wacker Drive Suite 1150, Chicago, IL 60601. Arrangements are under the care of Gendron Funeral & Cremation Services Inc. located at 135 North Lime Ave., Sarasota, FL 34237. 941-365-1767 www.gendronfuneralhome.com Those who wish to see the full obituary may visit www.gendronfuneralhome.com.