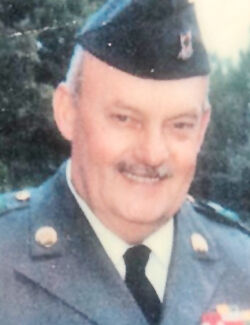 Edward C. Carlson CLARENDON — Edward Charles Carlson, 94, died Thursday, April 29, 2021, at Mountain View Center. He was born Oct. 19, 1926, in West Medford, Massachusetts, the son of Frank and Alena “Lena” (Rummler) Carlson. He grew up in Massachusetts until enlisting into the U.S. Navy at the age of 17. After serving for a year, he then enlisted into the U.S. Army where he serviced until retirement. Mr. Carlson married Phyllis Clark Lewis July 10, 1982. He was a member of Veterans of Foreign Wars in Springfield, American Legion in Windsor and the Loyal Order of Moose in Springfield. He enjoyed baking cookies for everyone. Survivors include his wife of Clarendon; stepchildren, Heather Hogaboom of East Hartford, Connecticut, Philip Lewis of Clarendon; six grandchildren, six great-grandchildren; nieces and nephews. He was predeceased by his first wife, Patricia Carlson, in 1980; stepson Robert Lewis in 2002; and five siblings, Frank, Christine, Olive, Eleanor and Dorothy. A celebration of life will be held at a later date. Burial will be in St. Mary’s Cemetery in Springfield. Memorial contributions may be made to the Springfield Humane Society, 401 Skitchewaug Trail, Springfield, VT 05156. Arrangements are by Aldous Funeral Home in Rutland.

Our condolences on Ed's passing. He was a good neighbor. Lived across the road from us on Fairground Rd for many years.