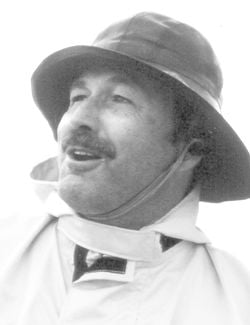 Edward L. Richards Jr. BROOKFIELD — Edward L. “Ted” Richards Jr., age 88, of Brookfield died peacefully on Feb. 1, 2020, at CVMC, from a brief illness, after having lived valiantly with Alzheimer’s for five years. In his final days, he was sailing in his imagination while singing old glee club songs. Special thanks is due for the staff of 2 South for their exceptional care. Ted was born on June 30, 1931, in Manhattan, New York. He graduated from The Hotchkiss School after attending Rye (New York) High School. College years were spent at Yale where he majored in English and was a member of the Yale Glee Club, as well as the Society of Orpheus and Bacchus. These experiences planted the seed of choral singing that continued to develop throughout his life, most recently in the choir of the Unitarian Church of Montpelier. After Yale, he served two years of active Naval duty on the USS San Marcos and remained in the reserves for 18 years, reaching the rank of Commander. In 1953, he married Sally Howe, together raising five children in Rye. He taught third grade and junior high at Greenwich Country Day School while studying for a master’s degree at Columbia. He then taught at the New York State Maritime College and Pace College while continuing his study of American Literature at NYU. Soon, the family migrated to Vermont for its beauty and pastoral lifestyle. Ted secured a position at Norwich University while continuing work on his doctorate, completed in 1975. He still found time for acting in Chandler and Norwich productions, as well as singing in the Randolph Singers. He also served his community as secretary of his local school board. At Norwich, Ted taught a variety of courses, specializing in Literature of the Sea and Military Literature, both courses he was instrumental in developing. He served as chair of the English Department and was a key player in bringing a Communications major to the curriculum. He was a member of many committees and chair of some. His love of sailing that began when he was an infant on his father’s boat, moved him to start a sailing club at Norwich, and he always gave generously of his time to teach friends and family how to handle wood and canvas. His membership in the American Yacht Club in Rye fed his intense love of the sea, and he took many cruises in waters all over the country. One of his fondest memories was being commodore of the Junior American Yacht Club while his father was club commodore. Ted was divorced in 1982 and married Paula Gills in 1987. Together, they shared a passion for birding that took them on many travels. Both had fulfilling careers at Norwich where Ted was honored for his service with the Board of Fellows Medallion, Honorary Alumnus status and the rank of Professor Emeritus upon retirement. Most notable, however, was the deep respect and affection his students had for him; his courses were always filled to capacity with waiting lists. After retirement, he enjoyed gardening, sailing with kids and grandkids, orchestrating family vacations at his beloved Lake Sunapee, volunteering at Lost Nation Theater, and serving the Unitarian Church on committees and as treasurer. One of his most cherished activities post-retirement was lunching weekly with retired NU English professors known as the “Romeos” (retired old men eating out); they held forth each Thursday at the Depot Square Pizzeria not far from campus. Ted will be deeply missed by his wife of 33 years; and his children, Ernest and wife Laura of Carson City, Nevada, Edward III and wife Patti of Savannah, Georgia, Jagjit Kaur Khalsa of Georgetown, Texas, Cuyler and wife Shari of Merritt Island, Florida, and Rachel Richards of Carson City. He also leaves four grandchildren, Andrew, Evan, Chelsea and Lindsay; his sister, Laura, and her three sons; and several cousins. A celebration of Ted’s life will be held on Saturday, June 20, 2020, at 3 p.m. at the Unitarian Church of Montpelier with a reception to follow. In lieu of flowers, Ted has asked for contributions to be directed to Project Independence, 81 North Main St., Suite 1, Barre, VT 05641-4283 where he spent many productive and enjoyable days the past few years.