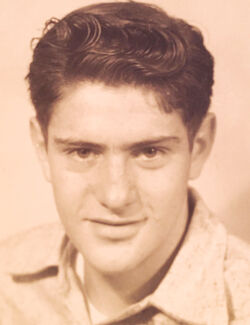 Edward Ross Eisler 10/13/1939 - 09/1/2020 HOLLY HILL, Fla. — Edward Ross Eisler, 80, of Holly Hill, Florida, passed on Sept. 1, 2020, surrounded by his beloved children and lifelong friends. He is survived by his siblings, Adrian Eisler of Wallingford, sister Stephanie Eisler of Brandon; six children, Lori, Robin, Edward Jr., Aura, Steven and Charlotte; as well as cherished grandchildren and great-grandchildren. Edward was predeceased by his beloved mother, Ethel H. Eisler, father Stephan E. Eisler; siblings Helen Jason, sister Ruth Eisler, brother Mark Eisler; and two sons, Kevin and Keith, in their early childhood. Edward began his adventurous life in Rutland on Oct. 13, 1939. He is remembered as a devoted son and spirited brother. His Grandpa Robert Huntoon's love of eclectic vehicles inspired a curiosity for engines and motorcycles that became Edward’s lifelong talent and passion. In 1958, Edward proudly joined the Armed Forces earning a Parachutists Badge in service, and was honorably discharged in June 1961. He then joined the Superhog Motorcycle Club of Vermont, a camaraderie sustained over his long life. He shared with his children and loyal club brothers, a love of the road, Harley Davidsons and freedom in rides across America. That road now continues on forever, gas tank ever full, a party that never ends! Edward lived most of his life as an amputee after a stock car racing accident resulted in the loss of a leg. Despite the resulting challenges, he forged a self-made life with vigor, charisma, tenacity and strength. His legendary mechanical skills and entrepreneurial ways meant he was eternally busy and in the company of friends and family. Edward will be memorialized in Burlington with club brothers, family and friends on Oct. 10. A graveside family service will follow in Green Hill Cemetery in Wallingford, Vermont, on Oct. 11.