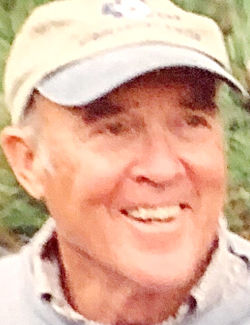 Frank E. Punderson Jr. MIDDLEBURY — Frank Edwards Punderson Jr. died peacefully on Jan. 3, 2020, at his home, surrounded by his immediate family. Frank was born in 1933 in Springfield, MA, the youngest of three children, to Beulah Boden and Frank E. Punderson. He attended Deerfield Academy and graduated from Middlebury College in 1955. While at Middlebury, Frank was instrumental in establishing the men’s soccer team, was an avid skier and ski-jumper, played drums in a swing band and took flying lessons at the Middlebury airport. After graduation, Frank enlisted in the U.S. Marine Corps and flew the F9F-2 fighter jet in the Third Marine Airwing (VMF-311). Frank later returned to Middlebury College to coach the fledgling men’s soccer team. In 1961, Frank married Linda Ide and together, they raised four children Martha Graf of Loma, CO, Ebenezer of Weybridge, Ingrid Jackson of Cornwall, and Samuel of Carrabassett Valley, ME. In 1965, Frank and Linda purchased and renovated a property on Fire Hill in Florence to make their first home in Vermont. They operated a small inn in Pittsford from 1968 to 1971, while Frank established his real estate business in Rutland. Subsequent moves brought them to Weston, Landgrove and finally, to retirement where they built their home in Cornwall. In 2017, Frank and Linda settled in at Eastview in Middlebury where, among their wonderful friends and neighbors, Frank lived out his final years. Frank lived his life with vigor and a passion for just about everything, including his friends, flying, skiing, golf and soccer, but his greatest love was Linda, their children and their wonderful spouses David Graf, Jill Madden, Woody Jackson and Kate Webber; and grandchildren Asa, Sam and Noah Graf, Dorothy and Harlow Punderson, Ebenezer and Silas Jackson, and Calvin Punderson. His greatest joy was being surrounded by his family, for whom he spent his last few months chronicling his family history. His family is extremely grateful for the warm, competent and accommodating care received from all who intersected with Frank over the past year and especially, in his final days. A joyful celebration of Frank’s life will follow in the spring. In lieu of flowers, donations in Frank’s memory can be made to Porter Medical Center or Helen Porter Rehabilitation and Nursing.

I was a “competitor” of Frank in the Real Estate business in Rutland. There was no competition. Frank was that rare thing, a true gentlemen. Honest, Fair, deservedly successful, and always with a smile, and sense of humor bubbling under the surface even in the most serious negotiations. In short, a great guy. My sincere condolences to all his family. -Enid K. Reiman