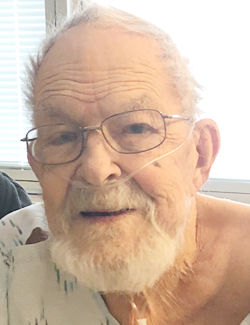 Frederick Zephere Dumas BENNINGTON — Frederick Z. Dumas, 88, formerly of Old Plymouth Road in Shrewsbury, Vermont, passed away May 6, 2020, at Bennington Health and Rehabilitation. Fred was born in Pittsford, Vermont, on Oct. 28, 1931, the son of the late Frank and Mabel Sweeney Dumas, and attended Poultney schools. Fred served his country as a member of the United States Army during the Korean conflict and was a member of Sacred Heart St. Francis de Sales Roman Catholic Church. Fred was a member of the Teamsters Union and worked as a truck driver for Holmes Transportation the majority of his working career. He was also a member of the VFW and American Legion in Bennington. Fred enjoyed hunting, fishing and snowmobiling. He was a fan of country music and loved working around his home. Fred is survived by his longtime companion and caregiver, Loureda Simmons; his sons, John Fredrick Dumas and wife Harriett of Hartland, Vermont, and Robert Dumas and significant-other Annamae; sisters, Patricia Hyjek of Florida and Frances Donovan of Cambridge, New York; grandchildren, Matthew and Nathan, and his great-granddaughter, Piper. He was preceded in death by his wife, Louise Ann Lampron Dumas, whom he married April 24, 1954, in Bennington; and his eight siblings. At the request of the family, there will be no formal funeral services. If friends desire, memorial gifts in Fred’s memory may be made to the American Legion Post 13 Bennington or VFW Post 1332 Bennington, c/o Hanson Walbridge & Shea Funeral Home, P.O. Box 957, Bennington, VT 05201. To send the family personal condolences, please visit www.sheafuneralhomes.com.

It is so hard to say goodbye. You were my best friend and companion for many years. You had many friends and you would sit for hours telling stories to them all. You were always eager to help .I remember when you were the old man climbing the tree to cut branches when the 40yr old was afraid too. You were always pulling someone out of ditches or snowbanks with your big equipment. You loved your hound dogs and especially hunting rabbits with your beagles. When you were not working around the house you were helping someone out at theirs..When your body said that's enough you still pushed on . You loved your sons and looked forward to their visits.You were loved and never will be forgotten.

I love you and miss you. Reda⚘

Dad. What can I say? You were always there for me whether I wanted your help or not. You were my mentor, hero, somebody I always looked up to and I hope I made you proud. I was always proud of you. I will miss you till we can be together again, give Mom a hug for me. Don't work too hard in heaven. I love you Dad. I am glad you are not suffering anymore.