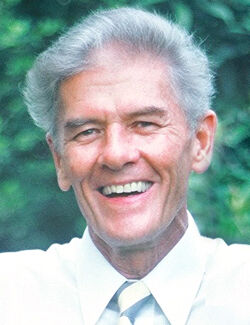 George H. Tappan KINGWOOD, Texas — George H. Tappan was born in Rutland, Vermont, Feb. 22, 1925, and died peacefully at his home in Kingwood, Texas, on Nov. 7, 2020. He was the son of George W. Tappan Jr. of White Plains, Georgia, and Sylvia Fearn Fiske Tappan of Brooklyn, New York. Following graduation from Rutland High School in 1943, he trained as a gunner in a 40mm anti-aircraft battery, and later served in General Patton's Fifth (Red Diamond) Division in the European Theater where he was injured following the Rhine crossing. After the war, he began his academic studies at the New York State College of Ceramic Engineering at Alfred University, and later completed a degree in Geology at the University of Kansas. He married Lois Sutton in Alfred, New York, in 1953, and spent 23 years of his career in Colombia, Venezuela, Perú and Libya, where he and his wife raised their young family. They returned to Connecticut in 1975, and later settled in Kingwood, Texas, northeast of Houston, from which he continued consulting in international petroleum exploration. From 1990 to 1998, he published a newsletter focused on international petroleum exploration, that was distributed in 23 countries. He retired in 1998 to devote full time to his wife whose health was failing. He had a deep interest in his extended family, maintaining special ties with the Georgia side of the family. He did extensive research on family history, genealogy, and helped with many family reunions. His work and travels as a young geologist in Columbia and Venezuela fed his fascination with the peoples, history and natural wonders of the remote valleys and snow-capped peaks of the Andes, and later – the desert cultures of coastal Perú. His interests included exploring tidal pools, snorkeling in the Pacific, and netting small fish for his saltwater aquariums. He enjoyed music, theater, operas, photography, reading and history. In Libya, he enjoyed wandering the ancient streets of Roman cities. His enjoyment of international living was passed on to his children and grandchildren. He was predeceased by his parents; a brother, Herbert Tappan; a sister, Rosalind Hassinger; and his wife of 49 years, Lois Sutton Tappan; and is survived by a brother, Gene (Martha) Tappan of West Milford, New Jersey; his children, Gray (Alison) Tappan of Brookings, South Dakota, Jonathan (Sarah) Tappan of San Diego, California, Margaret (Michael) Tappan Johnson of San Francisco; and five grandchildren. Burial is planned for a later date in the family plot, Evergreen Cemetery, in Rutland.