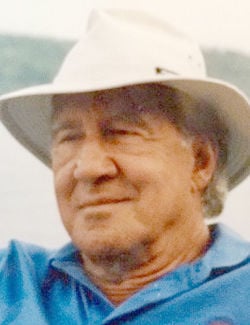 Guido "Guy" Rotella RUTLAND — Guido “Guy” Rotella died on Monday, Feb. 17, 2020, at the Meadows in Rutland, after a brief illness, and with his loving family at his side. He was born on May 4, 1919, in Rutland, the son of Mariano and Carmela Rotella. After graduation from Mount St. Joseph Academy and attendance at the University of Alabama, Guido served in the Navy during World War II, undergoing flight training, then teaching aircraft and ship identification. He married Laura Bottomley in 1947, and the couple raised five children. After periods of employment in sales and manufacturing, Guido operated Rotella’s Barber Shop in Rutland until his retirement at 70. He made his craft of barbering an art, and his professional skills, organizational and diplomatic talents were recognized by his appointment as chair of the Vermont State Barber Board and election as president of the Vermont State Barber’s Association, positions also indicating his commitment to public service. A lifelong communicant of St. Peter Church, Mr. Rotella served his parish in many capacities, for instance, as a lay reader, member and chair of the cemetery commission, school board member and liaison to the public schools. Service to his hometown included membership on the Rutland Area Vocational School and Rutland Police Department study groups and the chairmanship of the city Housing Authority. Like his father before him, he served as president and was an active member of the Sicilian-American Society, a self-help and social organization founded by immigrants. Respected, admired and loved by a large circle of family and friends, known for his imaginative empathy with the needs of others, Guido was a confidant and advisor to many, as well as an avid cook, handyman, gardener, and a connoisseur of politics, music and sports, especially golf at the Rutland Country Club, where he was a long-time member. Like his friends and family, those things stayed with him through a long and productive life. Guido is survived by his five children, Guy (and Mary Jane Marro) Rotella of Belmont, Massachusetts, Robert (and Darlene Avery) Rotella of Keswick, Virginia, Susan (and Stephen) Biro of Concord, Massachusetts, Mary Anne Rotella (and Mark Butler) of San Francisco, California, and Jay (and Martha Riley) Rotella of Bozeman, Montana; by his granddaughters, Casey (Rotella) Baruzzini and Sophia Rotella; by great-grandchildren, Lucy, Max, Laura, Thomas, George, Maria, Elena and Emilia Baruzzini and their father, Michael; and by many nieces and nephews. He was predeceased by his well-loved wife, Laura; his sisters, Josephine Rotella, Irene (Rotella) Ryan, Nancy (Rotella) Lemmo, Sylvia (Rotella) Manez, Edith (Rotella) Carrigan and Dea Rotella; and by his brother, Roy Rotella. Funeral arrangements are by Clifford Funeral Home in Rutland. Calling hours will be on Friday, Feb. 21, from 4-7 p.m. The funeral Mass will be celebrated at St. Peter Church on Saturday, Feb. 22, at 11 a.m., with burial in Calvary Cemetery at a later date. Memorial contributions in Guido Rotella’s name may be made to St. Peter Church, 134 Convent Ave., Rutland, VT 05701.

MY thoughts and prayers are with all the family, Guido was such a wonderful person we had long talks while he cut my hair i think he went extra slow every time i got in the chair. Prayer are with you all.

Those we hold most dear never truly leave us. They live on in the kindness they showed, the comfort they shared and and the love they brought into our lives. Quido is now at peace and is with the love of his life.. his sweet dear Laura. RIP Quido. You were one of the good guys. Condolences to all.

To the Rotella family

Guido was a special person and will be missed by all