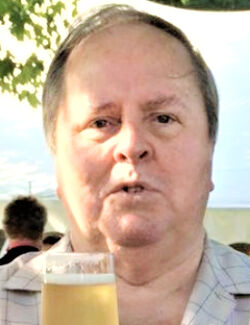 Harold "Bob" Flanders RUTLAND — Harold Robert "Bob" Flanders, 75, of Rutland died Friday morning, Nov. 6, 2020, at his residence. He was born on May 30, 1945, in Rutland, the son of Charles and Alice Jean (Emmons) Flanders. Mr. Flanders grew up in Rutland Town graduating from the Rutland High School. He enlisted in the U. S. Navy serving during the Vietnam War. He married Claudia Hall on Jan. 12, 1969, in Raceville, New York. Bob was employed as an electrician by Central Vermont Public Service Corp. for 39 years prior to his retirement. He enjoyed, hunting, fishing, spending time on Lake Dunmore and golfing. Mr. Flanders was a member of the American Legion Post #31 and the CVPS Golf League. Survivors include his wife, Claudia Flanders of Rutland; two sons, Robert Flanders and his significant other, Jona, of North Clarendon, and Keith Flanders and his wife, Candee, of Mount Holly; a daughter, Michelle Niklasson and her husband, Strew, of Mount Holly; six grandchildren, Brenden, Kassie, Jakob, Sarah, Ryan and Emily; three brothers, Charles Flanders of Castleton, Gene Flanders of Rutland City, and John Flanders of Brandon; several nieces and nephews. He was predeceased by his father in 1995 and his mother in 2016. There will be no public services. Arrangements are with the Aldous Funeral Home. Memorial contributions may be made to the Visiting Nurse Association & Hospice of the Southwest Region, 7 Albert Cree Drive, Rutland, VT 05701.