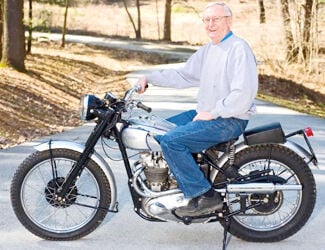 Harold E. "Bud" Leonard, Jr. WEST RUTLAND — Harold E. “Bud” Leonard Jr., 87, passed peacefully at home Saturday, Sept. 12, 2020, surrounded by his loving family, as he desired. Born April 18, 1933, in Lebanon, New Hampshire, to Harold E. and Regina (Boivin) Leonard, Bud grew up in the Upper Valley surrounded by a very large, yet close, family of Leonards, Boivins, Soules, Tremblays and many more. Family gatherings, where there was plenty of food and the coffee was always "on," frequently included 30 or more dining on all the favorites. This was a tradition that Bud was proud to continue with his own family as Averys, Follensbees, Phelps, Barnetts, Hills and Korsgrens, among others, were added. A graduate of Lebanon High School, Class of 1951, Bud was proud to serve in the U.S. Army Signal Corps during the Korean conflict. He spent a year assigned to the Army Pacific Command Main Communications Station on an island in Tokyo Bay where his diligence and technical abilities allowed him to quickly rise to the position of “Trick (shift) Chief” as a Private First Class. Returning from the Pacific, he set his sights on building a family with "that girl from Enfield" - Dorothea Avery, known to all as “Bunny.” Life in the Upper Valley mid-1950s brought many challenges with the woolen industry closing and jobs scarce. Bud and Bunny both worked multiple jobs, some with long commutes, to buy a house and to provide for their growing family. A pivotal change occurred when Bud joined The American Optical Co. in Hanover where, with 10 years hard work, he rose to manager of the office and lab, then located in Lebanon. In 1973, after 17 years with AO, Bud, with Bunny and other family members, started their own company, Lenco Optical in Rutland, Vermont, where they moved in 1975. Within a few years, they opened locations in Winooski, Vermont, and Nashua, New Hampshire, with a staff of over 30 serving optical clients across northern New England, upstate New York and northern Massachusetts. As the optical field evolved, they and their family continuously adapted to the changes and challenges of a growing business in a rapidly changing industry. As happens, after 42 years as the owners/operators of Lenco Optical, a well-earned retirement came as Bud and Bunny sold the business in 2015. Even before his own retirement, Bud pursued his hobby – Bud’s Bikes. An avid motorcycle rider from his teen years, Bud was never far from something with wheels and a motor. Beginning in the ‘80s, he acquired and lovingly restored nearly 40 classic bikes, predominantly Triumphs and Indians. He became "the go-to guy" for Triumph collectors around the country. He thoroughly enjoyed his hobby, his bike barn and the many friends he made in both the bike collector world and the optical industry. As a son, brother, father, grandfather, great-grandfather, uncle, great-uncle, cousin, Scout leader, veteran, co-worker or friend, Bud was proud and pleased to do his best in all things and to encourage others to do the same. He genuinely loved to share stories of his family and friends, and he savored their love like a fine meal. Bud has now joined his parents; brother, John Leonard; brothers-in-law, Bill Avery, Arnold Avery, Arthur Follensbee and Gerry Phelps; and his “other brother,” Louis Audette (who probably had the motorcycles warming up for a ride). He leaves behind his devoted wife of 65 years, Dorothea J. “Bunny” Leonard; daughter, Sharon A. Leonard, sons, David M. Leonard and partner Dee Scott, and Scott A. Leonard and wife Michelle, all of Rutland; siblings, Gloria L. Follensbee, Lebanon, New Hampshire, Jeanne M. Phelps, Goldsborough, North Carolina, Peter J. Leonard and wife Elin, Henniker, New Hampshire; sisters-in-law, Marilyn Avery, Patricia Avery, Shirley A. Barnett and husband Alan and Theresa A. Hill; seven grandchildren, Joshua Renfrow and wife Carol, Christie Bentz, Laurie Morrill and husband Chris, Julie Lernihan and fiancé Michael Waldroup, Michael Leonard, Nicholas Leonard, and Bradley Leonard; also, four great-grandchildren, Kyla Bentz, Braden, Elena and Delila Morrill; additionally, many nieces, nephews, grandnieces, grandnephews, cousins and friends. A graveside service with be held on Thursday, Sept. 24, 2020, at 1p.m. in the Valley Cemetery, Mascoma Street, Lebanon, New Hampshire. Memorial contributions may be made to the Rutland County Humane Society. Arrangements are by the Clifford Funeral Home.