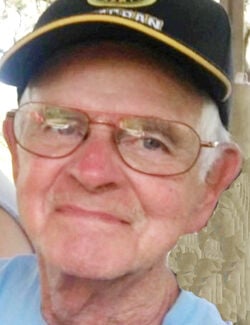 Harry E. Chamberland Jr. RUTLAND — Harry Edmund Chamberland Jr., 85, of Riverview, Florida, formerly of Rutland, Vermont, died Thursday evening, Dec. 23, 2021, at his residence, following a brief illness. He was born in Rutland, Dec. 9, 1936, the son of Harry and Mary (Sherbert) Chamberland. He was raised in Rutland and graduated from Mount St. Joseph Academy. He married his late wife, Laura Badger, on Nov. 28, 1964, and they relocated to Proctor. Harry was a member of St. Dominic Church. He served 20 years in the military, including National Guard and Army Reserves. He was a retired employee of College of St. Joseph. His hobbies included antique cars. He could talk for hours on the subject. He also enjoyed watching westerns and loved country music. He was also an avid NASCAR and Dale Jarrett fan. He was a woodworker and loved molding his own creations. He loved to laugh, make others laugh, and spend quality time with his cat, Tabby. In 2019, he relocated to Florida, a state where he always wanted to live. Once moving to Florida, he enjoyed going to Walt Disney World and Universal Studios as often as he could, or just cruising in the Mustang. Survivors include a daughter, Tracy Boyd and her husband, Scott, of Portsmouth, Rhode Island; three sons, Harry E. Chamberland III and his wife, Cindy, of Rutland, Steven Chamberland, of Rutland, and Gregory Chamberland, of Riverview, Florida; and granddaughter, Charlotte Chamberland, of Rutland. He was predeceased by his wife, Laura, in 2005; his parents; and his brother, George. Funeral services are pending with the Aldous Funeral Home. Burial will be at a later date in the East Clarendon Cemetery. Memorials may be made to the American Cancer Society, Rutland County Humane Society, or St. Dominic Church, Proctor.

Tracy and Family, I'm so very sorry for the loss of your dad.

Sorry to hear about dad passing may he RIP

My words cant say.. I remember your mom and dad from when we were kids. He was always so nice to me and my brother. We worked with him for years and he always respectful to everyone he met. I am so sorry for your loss.