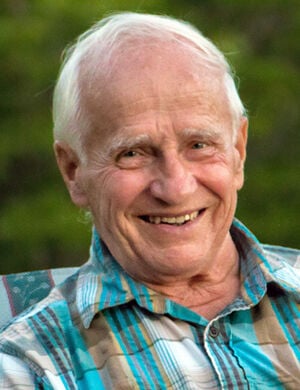 Henry S. Chapla CLARENDON — Henry Stanley Chapla, 93, of Clarendon, died on Friday, July 16, 2021, at his home. Born July 15, 1928, in West Rutland, he was the son of Stanley and Josephine (Wasik) Czapla. Henry was a devoted and caring, husband, father, grandfather and great-grandfather. His love for the state of Vermont endured over many years and moves across the country, which ultimately brought him back home for the remaining years of his life. Henry served in the United States Army and then attended Tri-State College (Trine University) in Angola, Indiana, on a G.I. Bill, where he received a degree in civil engineering. There, he met his wife, Jacqueline (Alberding) Chapla. They had a devoted marriage of nearly 60 years until she passed on Sept. 14, 2014. Henry worked as a civil engineer for the State of Illinois, Weyerhaeuser and Finkel and Associates (New Jersey). He was proud of the many projects and of his knowledge of wood that had him sought after by so many for his expertise. Surviving are four daughters, Jacqueline Faitoute (John Anderson), of Flemington, New Jersey, Rhonda Chapla (Bernard Yeager), of Clarendon, Vermont, Laura (Dieter) Matern, of Rochester, Minnesota, and Natalie Chapla, of West Pawlet, Vermont; a son, Greg (Beth) Chapla, of Muncie, Indiana; three sisters, Mary Hoffman, Josephine and Sophie Chapla; seven grandchildren, Matthew, Nicholas and Eric Faitoute, Steven Chapla, Lukas and Marie Matern, Dana Tokarzewski; and two great-grandchildren, Marcy Faitoute and Leo Faitoute. He was also predeceased by three brothers, Frank, John, Louie Czapla; and one sister, Helen Colananni. A funeral Mass will be celebrated at 11 a.m. on Friday, July 23, 2021, at St. Stanislaus Kostka Church in West Rutland. Burial will follow in St. Stanislaus Cemetery. In lieu of flowers, contributions to Little Sisters of the Poor or the Alzheimer’s Association are appreciated. Arrangements are by the Mullin-Clifford Funeral Home in West Rutland.