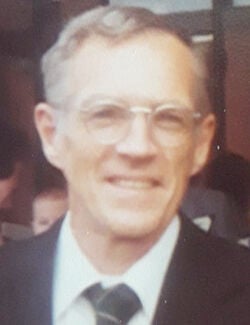 Hugh Joseph Short SOUTH BURLINGTON — Hugh Joseph Short, 98, of South Burlington, Vermont, died at home of old age on Nov. 4, 2020. He lived and died surrounded by his large family. Hugh was married to his wife, Florence, for nearly 75 years and they raised 11 children. Hugh was born in Newark, New Jersey, on March 3, 1922, the son of Frank and Catherine (MacKenzie) Short. He grew up in Hillside, New Jersey, and was a standout track and field athlete in high school. As a junior, he won the national title for the 1,000-yard run. Several colleges offered scholarships and he choose to attend Georgetown University where he equaled the world’s record in the 600-yard dash and anchored the world record mile relay team. Hugh was a member of the Georgetown Athletic Hall of Fame. During World War II, Hugh volunteered to serve his country in the Army. He was in the 85th Infantry “Custer” Division, with the rank of Private First Class. He fought in Italy and was awarded the Bronze Star for meritorious service. During this time, Hugh and Florence started their relationship through overseas letters. After the war, Hugh married the woman of his dreams, Florence Gallagher, on Dec. 1, 1945. They started a family while he attended The University of Michigan, graduating in 1947 with a degree in Journalism. Moving to Rockland County, New York, Hugh taught social studies and coached running while completing his Master of Education degree from Teachers College, Columbia University. During his early years teaching, Hugh co-authored a history textbook used in Catholic schools. Hugh and Florence moved to Montgomery Center, Vermont, in 1955. They sought out a beautiful place to raise their family. They had an early interest in good nutrition and raising their own food. In 1957, Hugh and Florence moved to Chittenden where they lived and gardened for 45 years. Hugh taught and coached at Rutland High School for 27 years. He received the Distinguished Secondary School Teaching Award from the John Haye Foundation of Harvard University in 1964. Hugh coached track and field and cross country running for more than four decades in Rockland County, New York, and Vermont schools, including Enosburg Falls and Rutland high schools, and Mount St. Joseph Academy. He had many championship teams and individual champions, including his own children. Hugh inspired many others to coach and his impact on the sport ripples through Vermont running programs to this day. After 25 years away from running, Hugh returned to competition. He ran many road races and 27 marathons, with a personal best time of 2:54, at age 57, in Boston in 1979. He competed until age 80. Hugh and Florence returned to northern Vermont, living in Richford from 2002-2010 and since then, had lived in South Burlington. Hugh had a lifelong love of Ireland and was proud that his wife, Florence, was born in Dublin. They made three trips back to visit family and tour the green countryside. Hugh was a devout Catholic and committed his life to fighting social injustice. From witnessing Dr. King’s “I Have a Dream” speech to the Occupy Wall Street Movement when he was 89 years old, Hugh stayed active in moving his community and country toward equal opportunities for all. Hugh is survived by his wife of nearly 75 years, Florence Short. They were the longest married couple in the state of Vermont. Hugh said it was his favorite record. He leaves his 11 children: Frank and Helen Short of St. Albans; Michael Short of Burlington; Katie Bell of Grass Valley, California; Maureen Short and Stan Katz of New Haven; Peter Short of Reseda, California; Mariellen and Matthew Facchino of San Jose, California; Maria Short of Fletcher; Christine Short of South Burlington; Eileen Short of St. Thomas, U.S. Virgin Islands; Julia and Scott Batdorff of Portland, Oregon; and Deirdre Short of St. Thomas, U.S. Virgin Islands. Hugh had 21 grandchildren, many great-grandchildren, and one great-great-grandchild. He leaves many special and longtime friends. He was predeceased by his sisters, Marion Sauer and Peggy Short. A Mass of Christian burial will be celebrated at The Catholic Center at UVM, Burlington, on Saturday, Nov. 14, 2020, at 11 a.m. Due to COVID-19, this is by invitation only. A full celebration of Hugh’s life and interment is postponed until safe travel is possible. Arrangements are being handled by Ready Funeral Home South Chapel, 261 Shelburne Road, Burlington. Please visit their website at www.readyfuneral.com for a full obituary and to post recollections and condolences. In lieu of flowers, please consider a donation to the University of Vermont Health Network Home Health and Hospice, Hospice Program, 111 Prim Road, Colchester, VT 05446. The family is grateful for the kind and professional care they gave Hugh.

I remember Mr. Short always offering encouragement and kindness to everyone. Condolences to all his loved ones and extended family. Our community lost an inspirational man, coach, and teacher.

My condolences to the family and friends. May he be greeted with open arms to the next journey of human life. RIP Hugh Musky

Mr Short was an excellent history teacher. I fondly remember him teaching us about gorilla warfare, as he got down on all fours & crawled under his desk...epic!