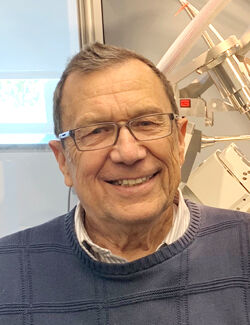 Jerry P. Jasinski SPRINGFIELD — Jerry P. Jasinski, 80, died unexpectedly at his home on April 12, 2021. He was born in Newport, New Hampshire, to Victor and Ann (Piotrowski) Jasinski. He graduated Towle High School in 1958 and earned bachelor’s and master’s degrees in Chemistry at the University of New Hampshire, a master’s degree in natural science from Worcester Polytechnic Institute and a Ph.D. in Chemistry from the University of Wyoming. He also served for a short time in the U.S. Marine Corps. Jerry’s career spanned more than five decades of teaching, research, coaching and officiating. He spent nine years as a secondary school chemistry/physics teacher in the districts of Middleburgh, New York, Claremont, New Hampshire, and Springfield, Vermont. In 1978, he joined the faculty of Keene State College (KSC) as an assistant professor and retired in 2019 as an emeritus professor. He received numerous honors and awards throughout his academic career, including a Fulbright-Nehru Teaching and Research Fellowship in India, the inaugural award for Distinction in Scholarship and Research at KSC and the Albert Nelson Marquis Lifetime Achievement Award. In his career, he published more than 1,000 scholarly journal articles. Jerry was an avid sports enthusiast engaging in football, basketball, track & field, and was an all-state football player (New Hampshire Shrine Team 1958), a state high jump record holder (New Hampshire 10 years) and a premier decathlete (2nd, New Hampshire 1958). He enjoyed being a football, basketball and track & field official for 40 years at the secondary school level in the New Hampshire, Vermont and New England region and an assistant track coach for KSC for 18 years. He was selected as the Vermont Football Official of the Year in 2015. He established the Vermont State Heptathlon and Decathlon Championships and directed it for 35 years. In his honor, it is now known as the Jerry P. Jasinski Vermont State Heptathlon and Decathlon Championships. He also established and directed the Springfield Pee Wee Football league for 18 years. He was inducted into the Towle High School Athletic Hall of Fame in 2011 and the Vermont Principals Association Hall of Fame in 2013. Jerry was predeceased by his father, mother, brother Victor James, and sister Mary. Jerry is survived by his wife of 54 years. Jacquelin; his sister, Nancy (husband Noah); brother, Timothy (wife Mary Ellen); his children, Jana (husband John), John, Jennifer (husband Jack); and his grandchildren, (Aiden, Carter, Sawyer, Emilia and Nicholas). A graveside service will be arranged at the convenience of the family at a later date.