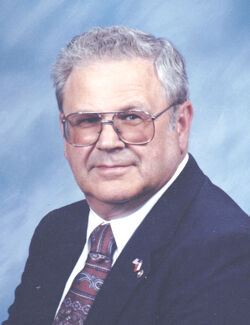 John J. Socinski CENTER RUTLAND — John J. Socinski, 82, of Center Rutland, Vermont, died peacefully Feb. 20, 2021, at home. He was the youngest son of Adam and Eva (Maciag) of West Rutland, Vermont. After graduating from West Rutland High School, John married his best friend and high school sweetheart, Janet (Carlson), and settled in Proctor, later moving to Center Rutland. He spent a great deal of his life in the stone business. He owned and operated McCue Memorial Co. and later partnered with his son, David, in RMG Stone Products in Castleton. In his retirement, he continued to donate his time and expertise to many projects involving military memorials. He was most proud of the West Rutland WWII Veteran’s Memorial and the Essex County War Memorial in Tappahannock, Virginia. John followed his passion for love of country and the military, honoring veterans of all wars by planning these war memorials. John committed himself to public service positions, organizations and projects. One of his favorite local service projects was being a part of Rutland’s Angel of Hope. He served on the Proctor School Board, Rutland Town Select Board, College of St. Joseph's Board of Directors and Rutland Chamber of Commerce. He was a member of Rutland South Rotary for 34 years. He served 20 years in the Vermont National Guard 40th Army Band. John was a music lover. For many years, he traveled with family and friends to the Metropolitan Opera in New York City. He was a patron of the arts supporting the Paramount Theatre. John had great culinary talent and enjoyed sharing and preparing meals for family and friends, including a pig roast event hosted by him and his wife, Janet. He was a man of character who led by example and sought fairness strongly. He was a mentor to family and friends. John is survived by his wife of 64 years, Janet (Carlson); sons, Dr. Mark and his wife, Tina (MacGroder), David and his wife, Sarah (Szarmach); daughters, Ellie Davine and her husband, Bill, and Mary Conti and her husband, Tim; grandchildren, Audra Socinski Dix (Bryan), A. Gregory Socinski and Siobhan Philbin, J. Alexander Socinski, Bernie MacGroder III, Miranda Socinski Link (Nolan), Wyatt Socinski, Claudia Szarmach, Troy Davine and Jordan Beaudry, Trey Davine, Benjamin Conti, Grace Conti; great-grandchildren, Ethan Dix and Axel Link; brothers, Henry (Cynthia) Socinski, Leonard Socinski and Erica Burke; brother-in-law, Alan Gregory (Monica); and numerous nieces and nephews. John was predeceased by his son, Gregory; siblings, Sister Mary Monica (Eleanor), Anthony Socinski and Monica Gregory. A funeral Mass for family and close friends originally scheduled for St. Peter Church in Rutland on Friday, Feb. 26, at 11 a.m. has been relocated to Immaculate Heart of Mary on Lincoln Avenue in Rutland. A graveside service will be held in Riverside Cemetery in Proctor in the spring and a celebration of life will be held in the summer. In lieu of flowers, donations may be sent to the Foley Cancer Center; the Open Door Mission; or, in the spirit of John’s generosity, send a donation to your favorite charity in his name. Arrangements are by the Clifford Funeral Home.

John was a wonderful public servant and family man. He will be missed by many.

John has been a very important, special mentor and person in my life. Both John and Janet have taught me many important life lessons and mean the world to me. John always had an open door, great advice and the best stories. RMG Stone will not be the same without him and his counsel. My thoughts and prayers are with Janet, David, Mark, Ellie, Mary, all of his grandchildren and his very large extended family. John will be missed by so many and he will always have a special place in my heart.