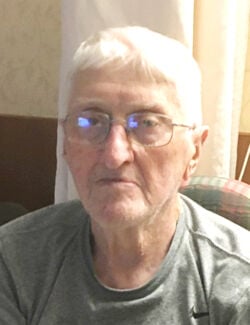 John Manney RUTLAND — John Manney, 89, of Rutland, Vermont, passed away peacefully at his home surrounded by his loving family, on Jan. 2, 2022, after a brief illness. He was born March 18, 1932, in Mendon, Vermont, to the late Cyril and Grace (Williams) Manney. He graduated from Rutland High School in 1950 and entered the Army. He served in the Korean War from 1952-1954 and was instrumental in fundraising and placement of the Korean War Memorial in Main Street Park, of which he was proud of. He was a member of the American Legion and served in the Color Guard for several years. After returning home from the war, he started working for New England Telephone and Telegraph as a lineman. He loved his job and had many funny stories to tell. When NET&T became AT&T, he became a technician installing and repairing telephone systems. He loved that job as well and enjoyed meeting people. He retired in 1993 but had his own business repairing phones. John loved animals; he had many dogs over the years and enjoyed feeding his birds and squirrels in his backyard. Family vacations involved camping and many good times and memories were made. Despite his family being avid Red Sox fans, John was a faithful Yankees fan and passed that love on to his family. Many happy memories were made over those baseball games with all three children. He was also involved in the beginning of RAHA as his oldest son played hockey. He never missed a game. He was also the biggest fan of his grandchildren at their events. In 1960, John married the love of his life, Marie Beauchain. They were introduced by his aunt, who worked with Marie. She jokes that she knew his whole family before him. They were married for 61 years. John is survived by his wife of 61 years, Marie; his daughter, Susan (Mike) Nordmeyer, of Florence, son Keith (Tammy), of Chippenhook, and son Jeff, of Rutland; four grandchildren, Aimee (Ben) Merkert, of Hinesburg, Vermont, Ethan Nordmeyer, of Pittsford, Vermont, April (Marc) Doiron, of West Rutland, and Andrea Manney, of Chippenhook; and a great-grandson due in June. He was predeceased by his parents; his sister, Mary Ellen Perry; brothers, Cyril, Frank and Walter Manney. A funeral Mass will be celebrated at Immaculate Heart of Mary Church on Saturday, Jan. 15, 2022, at 11 a.m. There will be no calling hours. Burial and a celebration of his life will be held in the spring. The family would like to extend their gratitude and thanks to the staff of PCU and 5th floor at RRMC and the wonderful staff at VNA & Hospice of the Southwest Region. In lieu of flowers, donations may be made to VNA & Hospice of the Southwest Region or Rutland County Humane Society. Arrangements are under the care of Clifford Funeral Home.

Sir thank you for your service to our nation and to the city of Rutland.. Rest In Peace sir 🇺🇸

We will miss Mr. Manney. He has been a great neighbor to us for many years...