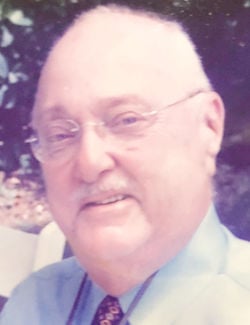 John McGarry RUTLAND — John’s life’s story began in Brooklyn, New York, on Feb. 4, 1930. He was born to parents Borgny Winnan and Barney Whitney. John was adopted by Dr. Tom McGarry and Cecilia (Carrigan) McGarry shortly after his birth in February of 1930. Dr. McGarry was the doctor who performed the delivery at Kings County Hospital in Brooklyn. When he was 7 years old, his family moved to Rutland, Vermont, where they were closer to the McGarry and Carrigan relatives. He attended Christ the King School and Mount St. Joseph Academy. After graduating from MSJ in 1948, he attended Saint Michael’s College and obtained his bachelor's degree in Business Administration. He went on to pursue his master's degree in Business at the University of Vermont. He served as a Navy Corpsman during the Korean War. During his time in the service, he also served as a Chaplain’s Assistant at the Navy Medical Hospital in San Diego, California. John is survived by his wife, Eloise; sons, John and wife Katie of Londonderry, New Hampshire, Joe and wife Katie of Newington, Connecticut, Bill and wife Kelly of Port St. Lucie, Florida, Rob of Rutland, Vermont, and daughter, Margaret of Southport, North Carolina; grandchildren, Patrick, Maggi, Logan, Addyson, Evan, Madalyn and Landon; brother, George Souls and wife Eleanor of Yorktown, New York, brother, Steven Whitney and wife Cela of Sacramento, California; brothers-in-law, Earl Hayes of Rutland, Vermont, Dale Hayes of Duncannon, Pennsylvania, sister-in-law, Olga of Friendship, Wisconsin. He has many nieces and nephews. He was predeceased by his mother, Borgny Winnan, his father, Barney Whitney; his father, Dr. Thomas McGarry, his mother, Cecelia McGarry; his brother, Dr. Thomas McGarry, his brother, Edward Souls, his sister, Cynthia Whitney; and brothers-in-law, Charles Hayes and William Faust. Throughout his life, he had various jobs. He worked as a sales representative for New York Life Insurance and Park Davis Pharmaceuticals in Pennsylvania. He also worked as a human resources director for Ethan Allen Furniture, Sunbury Textile and the State of Pennsylvania. In 1981, he retired as a human resources director from the State of Pennsylvania, to move back home to Vermont where he pursued a lifelong dream of owning a country store. He and his wife bought a country store in South Wallingford, Vermont, McGarry’s General Store, in 1980. After four years of owning the store, he and his family moved to Rutland where he went back on the road as a sales representative for four years. He then was a stay-at-home dad until his children graduated from high school. During those years of being a stay-at-home dad, he spent his summers as a cook for eight years at Camp Calumet Lutheran in Ossipee, New Hampshire. He loved camping there and used to say it was a place where he felt closer to God. This was one of the highlights of his life where he was able to spend time with his children and cooking in a beautiful place on Lake Ossipee during those summers. Each morning, he would go down to Lakeside Dining Hall to prepare breakfast for the 200+ children and staff and start off by having a cup of coffee sitting out by the lake. This was one place where he always said he felt at peace. This is where he will be laid to rest. After his children had graduated from high school, he purchased a hot dog wagon and operated it in front of Home Depot in Rutland, Vermont, for 10 years. During this time, he also operated the concession stand at the Spartan Arena when it first opened, for four years. He enjoyed meeting new people and talking with everyone he came into contact with. He was truly a people-person who loved life. John was a member of the Good Shepherd Lutheran Church, the Elks and the American Legion in Rutland. He enjoyed serving in various capacities at Good Shepherd through the years. He loved to cook at the church and especially enjoyed cooking for Dismas House once a month for 10 years representing the church. Besides spending time with family, camping, garage sales, collecting things for resale and traveling, his joy came from cooking for others and talking with them. John was kind to everyone he came into contact with. He loved and cared deeply for his wife, Eloise, his children and grandchildren. He always had a positive outlook on life and an award-winning personality. John ended his life’s journey on May 10, 2020, at home, surrounded by his loving family, at age 90. Memorial services will be held at a later date at Good Shepherd Lutheran Church in Rutland. Memorial contributions may be made to Camp Calumet Lutheran Ministries, 1090 Ossipee Lake Road, West Ossipee, NH 03836; or Good Shepherd Lutheran Church, 6 Church Hill Road, Rutland, VT 05701. Arrangements are under the direction of Clifford Funeral Home in Rutland.

My Condolences to the McGarry Family. My thoughts and Prayers for you all.

Our condolences on John's passing. He was truly everything mentioned in his obituary. I enjoyed knowing him.

Dear Ellie and family, I am so saddened to learn of John's passing. May his memory be for a blessing.....Karen Gartner

My condolences to the family.

My Condolences to the Family.