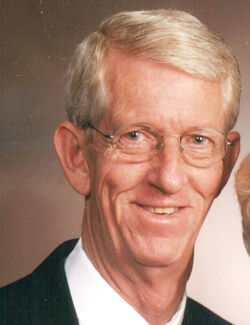 John T. Goodin CANTON, Texas— John Thomas Goodin, 81, of Canton, Texas, passed away on Sept. 27, 2021, at his home, after a long illness. He was born on May 28, 1940, in Springdale, Arkansas, to John Liston Goodin and Rema Combs Goodin. John grew up in Tulsa, Oklahoma. He entered the Army in 1958 and retired SFC in 1978. He did two tours in Vietnam and was a specialist and trainer in Ground Control Approach. John received The Bronze Star Medal in 1967 during his time in Vietnam. After retiring from the Army, John worked at Albertson’s as a drug manager. He met his true love, Marilyn, in Garland, Texas, and they married in 1997. The couple lived in Shrewsbury, Vermont, for 18 years before moving to Canton, Texas. John enjoyed country/western dancing. He was proud of his beautiful lawn and yard work. John was a hard worker but always had time for family. He was a devoted husband, father and grandfather. John leaves an empty place in the hearts of all who knew and loved him. John is survived by his beloved wife, Marilyn Goodin; daughter, Gail Goodin, Chicago, Illinois; stepchildren, David Peden and wife Connie Peden, Daniel Peden and wife Gracie Peden, and grandchildren, Haley Jo Peden, Amanda Danielle Peden and Nathan R. Peden, all residing in the Dallas/Fort Worth area. He was preceded in death by his parents, John and Rema Goodin; sister, Loreen. A visitation and gathering will be held from 11 a.m. to 12:30 p.m. on Wednesday, Oct. 6, 2021, at Eubank Funeral Home in Canton, Texas. Following the visitation, a funeral Mass of Christian burial will be offered by Father Jesudoss Thomas at 1:30 p.m. on Wednesday, Oct. 6, 2021, at St. Therese Catholic Church in Canton, Texas. Burial with military honors will be conducted at a later date, to be determined.