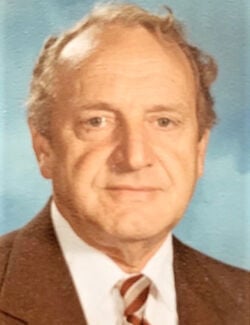 Joseph C. McCormack GLOUCESTER, Mass. — Joseph C. McCormack died July 2, 2021. He was born Nov. 24, 1922, in South Dorset, Vermont, to Thomas and Cordelia Emma (Bushee) McCormack. He was educated in Vermont, graduating from West Rutland High School and later receiving his Bachelor of Education from Castleton College and his Master of Education degree from the University of Vermont. He also graduated from Salem State. Joseph was an Army veteran of WWII. He served with the 9th Armored Division and was there when they captured the Ludendorff Bridge over the Rhine River on March 7, 1945, at Remagen, Germany, minutes before the demolition charges were set to explode. After his service in the military, much of Joe's early employment was in Vermont, first as a seventh-grade teacher, later as a high school Social Studies teacher, basketball and baseball coach, and subsequently as a high school principal. In 1956, Joseph joined the U.S. Base Dependents School program as principal of Ernest Harmon Air Force Base in Newfoundland, Canada, and later as principal of Zaragoza Air Force Base in Zaragoza, Spain. After returning to the United States, Joseph became the principal of a Newbury, Massachusetts, school, during which time he first visited the Gloucester and Rockport area. While in Newbury, he decided to return to the classroom and to live the remainder of his life near the beautiful Atlantic Ocean on the North Shore, both of which he accomplished when he joined the Gloucester School System, remaining there for 24 years. Joe loved sports and had many interests, including cheering for the Detroit Tigers since 1934, Red Sox, New England Patriots, Gloucester athletic teams, golfing, fishing, lobstering, gardening and photographing for the school yearbook. Most of all, Joe loved the students he taught in school, and they loved him just as equally. If a student had a problem in school or out, Joe was there to help on innumerable occasions. "There are no bad kids, just bad situations,'' he would say. Joe was also a very religious man, attending St. Ann's Church every Saturday. Joe was one of 14 children in his family, starting with Mary Elizabeth (b.1907), Ann Agnes (b.1908), Katherine Emily (b.1910), Cordelia Eva (b.1912), Thomas Louis (b.1913), Margaret Ellen (b.1915), Patrick James (b.1916), Dorothea Alice (b.1918), Edward Bushee (b.1920), Francis James (b.1924), Theresa Angela (b.1927), Susan Joan (b.1929), and Gertrude Rose (b.1931). Joe was devoted to his mother and would always say, "No doubt about it, she was the best person I've ever met in my lifetime." Those who have been fortunate enough to know Joe, would say the same of him. There are no visiting hours, and his burial will be held privately. A memorial service was held in the Greely Funeral Home, 212 Washington St., Gloucester, Massachusetts, on Friday, July 9, at 1:30 p.m. Online condolences may be given at: www.greelyfuneralhome.com