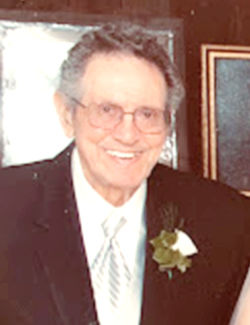 Joseph V. Cavalieri KENDALL PARK, N.J. — Joseph V. Cavalieri, 93, of Kendall Park, New Jersey, passed away peacefully due to complications of COVID-19, on Tuesday, April 28, 2020, in the New Jersey Veterans Memorial Home at Menlo Park. He was born in New York City to Italian immigrant parents, Joseph and Angelina (Avanzato) Cavalieri, and Italian was his primary language until attending elementary school. Following honorable service to his country, as a sergeant, both at the end of WWII and in the Korean War, he completed his education in New York state, learning the trade of draftsman, and augmenting that with classes at NYU. The majority of his professional career was spent employed by the Vermont Marble Co. where he held various positions in several states, ranging from draftsman in NYC, to managing the Detroit, Michigan, branch. After retiring from that firm, he continued in a consulting capacity for several other smaller New Jersey-based marble firms. He was a devoted husband and father, raising his four children and granddaughter Jacqueline. Family was the most important aspect of his life, and he was happiest when bestowing smiles and love to all within that circle. He enjoyed playing the piano, especially in those years when family gatherings included many members who joined in with instruments of their own. He was passionate about cooking, creating a beloved turkey stuffing recipe. In the Easter season, he created elaborate palm crosses, carrying on his family’s deep religious traditions. He found joy in all children, and was adept at “finding” quarters in many of their ears! Always ready to deeply listen to others he made lasting connections with many. He was a member of St. Augustine of Canterbury Church and the VFW Post 9111. He was the loving father of Joan McAndrew, married to Gary, Tom Cavalieri, married to Stacia, Margaret O’Dea, and Mary Latimer, married to Calvin Coolidge. He was involved in the lives of his grandchildren, Kevin, Ryan, Eric, Lisa, Kristin, Christine, Justin, Michael and Allison. He was loved by his many great-grandchildren, Cecelia, Thomas, Rory, Michael, Anthony, Vincent, Sophia, Katia, Alina, Noah, Bella, Taylor, Luke and Sadie. He was predeceased by his parents and his wife of 66 years, Matilda L. (Thonus) Cavalieri, whom he lost 10 short months ago. He is survived by his sister, Josephine D’Amour. Since 1980, he lived in Kendall Park, the last 15 months as a resident of the New Jersey Veterans Memorial Home at Menlo Park, Edison. The family would like to thank them for the wonderful, loving care provided, especially during his final days. The family is comforted to know he was with his VA “family” in his last moments. Arrangements will be private and handled by the M. J. Murphy Funeral Home, of Monmouth Junction, New Jersey. Interment in Holy Cross Burial Park, South Brunswick, New Jersey, will be held on Monday, May 4, 2020. Due to the coronavirus pandemic, a memorial service will be held at a later date. In lieu of flowers, memorial contributions may be made to the New Jersey Veterans Memorial Home at Menlo Park, 132 Evergreen Road, P.O. Box 3013, Edison, NJ 08818.

Add an entry as anonymous