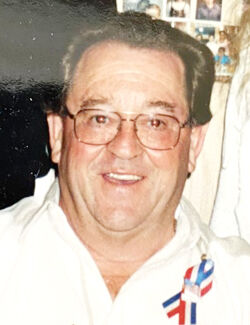 Leo A. Farley EAST WALLINGFORD — Leo A. “Lee” Farley, 83, died Oct. 7, 2020, at Rutland Regional Medical Center. He was born in Calais, Maine, Sept. 21, 1937, son of Elden and Nancy G. (Ireland) Farley. Lee was a 1955 graduate of Dennysville High School in Maine. He was a U.S. Air Force veteran. Lee was employed by Pan American Airlines in New York. He and his wife, Nancy, moved to East Wallingford, Vermont, and started Farley Florist Supply. He retired from General Electric Co. in 1996. Lee and his wife, Nancy, spent winters in Myrtle Beach, South Carolina. He was a member of St. Patrick's Church in Wallingford, Rutland American Legion Post 31, Rutland VFW and a 4th Degree member of K of C. Leo loved to talk to just about anyone. He was an avid joke and story teller. He lived, optimistically, hoping to win big on his favorite hobby, scratch-off tickets. He was a true Farley, enjoying every meal, his favorite being hot dogs. He loved spending time with his family and friends. He had a very generous heart and could always be counted on to help others. Surviving are three daughters, Nancy Ann Downing of North Clarendon, Patricia Ann Daly of East Wallingford and Lee Ann Denno of East Wallingford; five grandchildren, Jessica Pelerin, Michael C. Daly, Jennifer Ann Buffum, Gregory R. Downing and Evan L. Farley; several great-grandchildren; a close nephew, Larry Dudley of Summerville, South Carolina; nieces and nephews. He was predeceased by his beloved wife, Nancy (Giovanniello) Farley, on May 15, 2004; and three siblings, Dana Farley, Waldo Farley and Latina Dudley. A Mass of Christian Burial will be celebrated at 11 a.m. Tuesday, Oct. 13, 2020, in Christ the King Church. Burial will follow in Maple Grove Cemetery in East Wallingford. Memorial contributions may be made to Rutland County Humane Society, Stevens Road, Pittsford, VT 05763. Arrangements are by the Clifford Funeral Home.

Lee and Nancy both were good people! I am so sorry to hear of the passing of Lee! He did so much for others and even my family! Great sense of humor and an amazing friend to my sister and brother-in-law. Please know that he touched many people and he is someone who will never be forgotten. Take care to the family. You all will be in out thoughts and prayers. Take care! Mike and Vicki Kenyon

My thoughts and prayers go out to the Farley family.