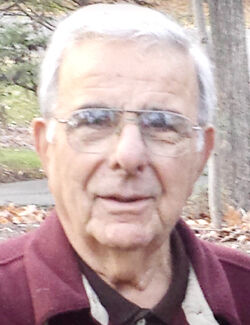 Leonard Patrick "Leo" DiGangi WEST RUTLAND — Leonard Patrick "Leo" DiGangi was born on Oct. 21, 1926, in West Rutland, Vermont, son of Maria (Sabatino) and Santo DiGangi of West Rutland. Leo died peacefully at the home of his daughter on Sept. 6, 2020. He was 93 years old. Leo attended West Rutland Public Schools and during World War II, interrupted his high school education to enlist in the United States Navy, serving his country aboard the USS William P. Biddle, an attack transport vessel, in the Pacific Theater of War. After the war, he finished his high school education, graduating from West Rutland High School with the Class of 1947. After high school, he graduated from the Louis Hotel Training School in Washington, DC, and then returned to Rutland, Vermont, where he joined the Metropolitan Life Insurance sales force for 18 years, advancing to sales manager in the Rutland office. He then joined the Prudential Insurance Co., where he remained until his retirement in 1989. In his earlier years, Leo was active in West Rutland town affairs serving on the West Rutland Prudential Committee, the West Rutland Volunteer Fire Department, town lister, the town Planning Committee, as well as the West Rutland School Board. He also served for two years on the state of Vermont’s land use and development Act 250 Commission within the Rutland District. He enjoyed skiing in the winter and golf in the summer. He was more than a 30-year member of the Otter Ski Patrol at Pico Mountain, as well as the Proctor-Pittsford Country Club. He was also a longtime member of the American Legion Post #87, the BPOE #345, the Italian Aid Society, the Italian-American Club and a lifelong communicant of St. Bridget’s Church in West Rutland. Leo was predeceased by his sisters, Josephine Sabatino and France Nash of West Rutland, Lillian Rocchi of Proctor, Vermont, Mary Morgan of Rutland; and brother, Joseph DiGangi of Bennington, Vermont. He is survived by his wife of 61 years, Gladys DiGangi of West Rutland; his daughter, Mary Ann Fallon and husband Frank Fallon of Chapel Hill, North Carolina; his son, Mark L. DiGangi and wife Tanja DiGangi of Essex, Vermont; and grandchildren, Emilie Fallon and Samuel Fallon of Chapel Hill, Stefan DiGangi and Niko DiGangi of Essex, Hunter DiGangi of South Burlington, Vermont, and Keely Colburn of Essex. He will be missed dearly. A funeral Mass in his memory will be celebrated at St. Bridget’s Church in West Rutland on Saturday, Sept. 19, 2020, at 1 p.m. Burial will follow in St. Bridget’s Cemetery. Masks will be required. In lieu of flowers, the family has asked that donations be made to a charity of choice. Arrangements are by the Clifford Funeral Home.

Gladys, Thinking of you. Know you are in my heart

Mrs. D, Mary Ann. and Mark, I was so sad to hear of "Mr. Ds" passing. Every time I would see him we shared a laugh! I will be fondly remembering him each time I am out on the course at Proctor Pittsford. He will be missed greatly! Please know you are in my thoughts. Jodi Muscatello-Cushing

Gladys, it was a pleasure to know Leo for all the years that I did. He was one of the best. Please accept this as an expression of my sympathy in his passing, I was shocked when I read the obituary. You and your family are in my thoughts and prayers, May he RIP. Margo Martin.

Mrs Digangi, Mary Ann, and Mark; So very startled this morning, to learn of your loss! It saddens me deeply!! Takes me back, a long long ways!! No matter how long it was between seeing him, he always recognized me instantly, and I oh so enjoyed chatting with him! My deepest sympathy, and thoughts, and prayers are with you!!

Please accept my condolences for the passing of your loved one. I have fond memories of Mr DiGangi. We had many amusing conversations as he used to check my Sunday morning crossword puzzle answers when he came into Luke's Place. He played a big role in the town and will be missed.

My thoughts and prayers are with you all. I have fond memories of your Dad, and our neighborhood many years ago.