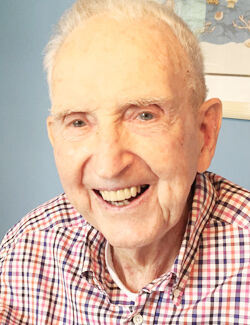 Lt. Col James H. Watson(USAF Ret.) WOODSTOCK — James Harvey Watson, 100, of Woodstock and Stuart, Florida, passed away peacefully on Oct. 13, 2020, after a full and eventful life. Born Dec. 18, 1919, in Meriden, NH, he was the son of Matthew Harvey and Addie Mae (Rogers) Watson. He graduated from Woodstock High School in 1938, where he excelled at baseball and at ski racing (slalom, cross country and ski jumping). He raced in the US Nationals at Sun Valley, Idaho, in 1939, where he was also the skiing stunt double for Milton Berle in the first ski movie "Sun Valley Serenade." After graduating from the Pan American Flight School, Harvey flew Sikorsky Twin Engine float planes to Havana and the Bahamas prior to WW ll. He joined the U.S. Army Air Corps and flew 65 combat missions in North Africa and Europe. He remained in the USAF Reserves serving as a flight instructor in the Air National Guard and an officer in the Strategic Air Command, retiring as a highly decorated lieutenant colonel in 1968. He returned to the family farm in Taftsville after the war before becoming Postmaster and operating a general store and Vermont products mail order business, until retiring in 1983. Harvey was a dedicated family man. He was predeceased by his first wife of 38 years, Pearl G. (Taylor) Watson in 1981. He married Lois E. (Behrman) Watson on Feb. 8, 1984, and they enjoyed a wonderful life in Vermont and Florida and traveled the world together. He was predeceased by a daughter, Margaret Mae Wilcox, in 1999 and his sisters Greta Hewlett and Emma Vail. He is survived by his wife of 36 years, a daughter Susan E. Moore (James) of Concord, MA, and two sons, James H. Watson Jr. (Joan) of Rutland, and Richard M. Watson of Simsbury, CT. He was blessed with 11 grandchildren and 9 great grandchildren. Active in the community, Harvey served on the Woodstock School Board, the Planning Commission and as a member of the Woodstock (Rockefeller) Foundation for many years. He was a Paul Harris Fellow in the Woodstock Rotary, a member of the American Legion and the oldest living member of the Woodstock Masonic Lodge. His many interests included golf, hunting, fishing, dancing, and he mowed his own lawn to within six weeks of passing. An avid golfer, Harvey won the Vermont Senior Amateur and competed in the USGA National Senior Amateur. Harvey and Lois played on the People to People American International Golf Team sponsored by the US State Department with delegations to South Africa, Europe and Asia. Harvey was Lois's co-pilot as she flew them throughout North America and the Caribbean. Together they founded the Eig Watson School of Aviation located at the Homestead campus of Miami Dade College in Florida, which now offers 12 academic degrees in the aviation industry. Their initial interest was in providing flying time — pilot hours for aspiring commercial pilots. Due to COVID-19 there will be no calling hours. A private family burial will be held at the Taftsville Cemetery at the convenience of the family. Memorial contributions may be made to the Thompson Senior Center, 99 Senior Lane Woodstock, VT 05091 or to an organization of your choosing. An on line guest book can be found at cabotfh.com