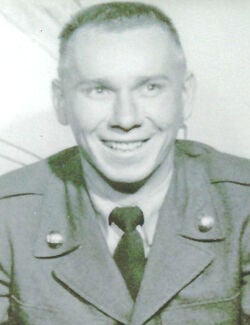 Michael E. Gintof Sr. SPRINGFIELD — Michael E. Gintof Sr., 87, lifelong resident of Springfield, passed away on Nov. 26, 2020, in the comfort of his home, after an eight-year battle with lung cancer. He was surrounded by his wife and children in his last days. He was born Nov. 7, 1933, son of Felix and Emilia (Zurawowicz) Gintof who both predeceased him. He married Arlene Johnson on July 18, 1959. They were married 61 years. He is survived by his wife; son, Michael Gintof Jr. (Jeannie) of West Rutland, Vermont; daughter, Michelle (Brian) Milano of Normandy, Tennessee; son, Steven (Jodi) Gintof of Springfield, Vermont; Thomas (Danielle) Gintof of Meredith, New Hampshire; seven grandchildren; two step-grandchildren and four step-great-grandchildren; and many nieces and nephews. He was preceded in death by his brother, Henry Gintof, and sister, Lorraine Wescott. He graduated in 1951 from Springfield High School where he played on the basketball team. He participated in the Co-op course and worked at Parks and Woolson until 1962, with two years serving in the United States Army. He spent 14 months in Korea. He worked at Fellows Gear Shaper from 1962 until 1990. After retiring, he enjoyed spending time with his wife, children and grandchildren. He also enjoyed gardening, maple sugaring and meeting friends at the diner for coffee, where he would bring his extra vegetables to share. He also found pleasure in having breakfast once a month with the Class of 1951. He belonged to the Hitormis Club, where he was president for over 20 years. He also was a member of VFW Post 771. The family would like to thank Dr. Konstantin Dragnev, the doctors and staff of Dartmouth-Hitchcock Hospital and BAYADA Hospice for all of their care. Funeral services will be held in the Spring of 2021 and announced at that time. Davis Memorial Chapel in Springfield, Vermont, is assisting with arrangements.