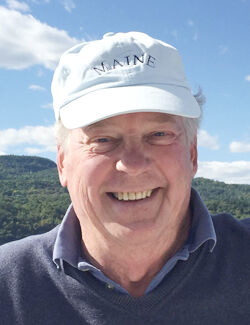 Michael H. Stimpfel Jr. CLARENDON — Michael H. Stimpfel Jr., born Dec. 13, 1947, passed away peacefully in his sleep at home in Clarendon, Vermont, on Nov. 9, 2021, after being diagnosed with ALS/Lou Gehrig's disease in 2019. As a boy in Teaneck, New Jersey, Michael developed an early love of nature through the Boy Scouts and Sea Scouts and grew up trapping, practicing his marksmanship, and boating on Barnegat Bay. He attended Bergen County Vocational-Technical High School and enlisted in the United States Marine Corps at the age of 18. He served two tours in Vietnam from 1966-1970, making the rank of Sergeant after his first tour. While in the Marine Corps, he earned the Vietnam Service Medal with two Bronze Stars, his Rifle Marksman Badge, and a Meritorious Unit Citation with the RVN Cross of Gallantry with Palm and Frame. After his honorable discharge in 1970, Michael picked up his tools to focus on building again. Returning to his home state of New Jersey, he worked as a general contractor for a number of years before landing a dream job as a captain on a '63 yacht, taking its owner annually from their home in New Jersey down to Fort Lauderdale and back. While in Florida in 1972, Michael met his future wife, Jeannie, at the Bahia Mar Yacht Basin on G dock one evening — and she also happened to be from New Jersey. Michael took the yacht back north one last time and then stayed to romance Jeannie. They were married in 1974 in her parent’s home — the beginning of their 47-year marriage. Michael attended Stockton State College for two years on the G.I. Bill, where he traded carpentry skills for learning basic silversmithing. In 1974, he opened a jewelry store specializing in handcrafted silver jewelry with a friend in Ocean City, New Jersey. In the fall of 1977, Michael and Jeannie moved to Killington, drawn north by the lovely landscapes and even better friends. In 1982, Michael opened his well-loved jewelry studio on Merchants Row in downtown Rutland, from which, as a bench jeweler, goldsmith and diamond setter, he designed and crafted his loyal customers’ pieces until his retirement in 2007. Michael was drawn to performing acts of service in his community throughout his life, and was a member of the Rutland Lion’s Club, Vermont Achievement Center (VAC) executive board, served two terms on the Clarendon Elementary school board, and volunteered for the Vermont Foodbank. Michael was a 32-year member of Grace Congregational Church where he served on the Property committee and Diaconate. Michael also helped with the Harvest Supper for over 20 years, feeding over 200 people. He used his carpentry background to create and build sets and staging for Grace’s productions of Jesus Christ Superstar and Joseph and the Amazing Technicolor Dreamcoat. In his retirement, he taught silversmithing classes through the Carving Studio in West Rutland, passing his knowledge on to the next generation and celebrating their talents and vision. A true Renaissance man and jack-of-all-trades (and master of them all, too), Michael had a deep appreciation for artistry and good craftsmanship, whether it came in the form of a sailboat, a sculpture, a nebula, or an excellent meal. He raised his daughter, Carissa, on a steady stream of outdoor adventures, good literature and extravagant home-cooked meals in the house he designed and built. He espoused the virtues of curiosity, confidence, competency and compassion, and was well-loved and respected in his community. His sense of humor, know-how and ready smile will be deeply missed by his family and friends. Michael is survived by his wife, Jeannie Stimpfel; his daughter, Carissa Stimpfel (Shane Cunningham); his sisters, Frances Manrell and Dorothy Stone (Gordon); his nieces and nephews; and his brother-in-law, Ronald Murray. He was predeceased by his parents, Michael Stimpfel Sr. and Stephanie (Jankowski); his brother-in-law, Donald Manrell; and sister-in-law Penny Murray. A memorial service will be held at Grace Congregational Church in Rutland, Vermont, on Saturday, Dec. 11, at 1 p.m. — masks required. A celebration of Michael’s life will follow in the spring of 2022 with an announcement in the Rutland Herald. Memorial gifts, in lieu of flowers, may be made to the ALS Association Northern New England Chapter, 10 Ferry St., #438, Concord, NH 03301; or to the Vermont Foodbank, 92 Park St., Rutland, VT 05701. Tossing Funeral Home is assisting the family with arrangements.

Those we hold most dear never truly leave us. They live on in the kindness they showed, the comfort they shared and the love they brought into our lives. I am still wearing the pieces of gold Michael made me and still say..” go see Michael” when anyone asks me about a certain piece. Please accept my heartfelt condolences and just think of all the gold halos he is now making and polishing. Lucy Notte