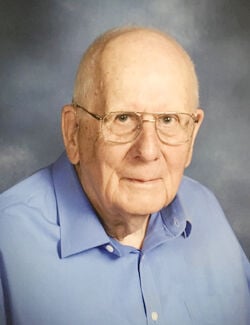 Norman G. Johnson PROCTOR — Lt. Col. Norman G. Johnson, 92, formerly of Proctor, Vermont, passed peacefully to eternal rest on Nov. 30, 2020. Cause of death was a sudden, massive heart attack. Norman was born June 11, 1928, in Proctor, firstborn and only son of George Oscar Johnson and Elsie Hector Johnson, also born and raised in Proctor. Surviving him are sisters Carolyn Miglorie of Proctor and Rita Colombo of Lynnfield, Massachusetts. He is also survived by daughter Dr. JoAnne Allen and her husband, James Brainard; daughter Nancy Bilderbeck and her husband, Mitchell Bilderbeck; and son Barry Johnson; three grandchildren, Lawrence Allen and his wife, Bianca Bologa, Dr. Amy Bilderbeck and Dr. Raymond Bilderbeck. Norman was a career military officer serving in the Army for over 20 years. His military service included duty in Vietnam. He was awarded the Bronze Star Medal, the Army Commendation Medal and the Legion of Merit, along with other medals and commendations. His military service was largely in the field of nuclear research and testing. Following his military career, he taught chemistry at Sandia High School in Albuquerque, New Mexico, and later, returned to nuclear engineering. He held three degrees in Science, Engineering and Administration from Norwich University, U.S. Naval Postgraduate School and the University of New Mexico. Norman was preceded in death by his wife, Theresa G. Johnson, who passed in 2011. They enjoyed 60 years of marriage. He adored and cared for her in her final years visiting her daily in her resident health care facility. Norm’s remains were interred in the National Cemetery in Santa Fe following a private ceremony.