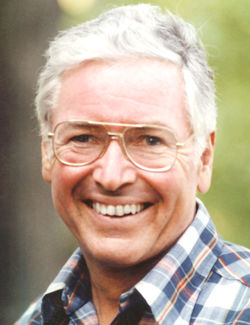 Philip T. Pope MANCHESTER CENTER — Philip T. Pope, age 93, of Manchester Center and Poultney, Vermont, passed peacefully at home on Feb. 28, 2020. He was predeceased by his beloved wife, Charlotte "Polly" Thrall Pope. Phil was born in San Francisco and grew up in New Jersey. He met Polly in junior high school French class in Morristown, New Jersey. They were friends throughout school and reconnected with earnestness during college. After Phil joined the Marines and went overseas during WWII, floods of letters in each direction ensued between the now-engaged sweethearts. On Phil’s return stateside, he continued his Princeton education where he had left off and in 1948, they married. In the following years, they busily parented five children, Christiana Pope, Lucinda Pope Scanlan, Stephen Pope, Bailey Pope and Laura Pope Pavlovich. As the years passed, they were graced with 12 grandchildren and four great-grandchildren. During these years, Phil founded, built and ran Pope Chemical Corp. in Paterson, New Jersey, and nursed it through its growing years and later success. In addition, he taught chemistry courses at Lehigh University, was chairman of the Paterson Private Industry Council and served numerous terms leading the Chemical Specialties Management Council. He represented the Council in the drafting of federal legislation to control the manufacture and import of toxic substances, later called the Toxic Substance Control Act of 1973. Phil was also very involved in church, civic, Boy Scout and Girl Scout leadership. Phil enjoyed introducing outdoor adventures to young people and led countless wonderful trips skiing, white water canoeing, camping, hiking and mountain climbing to generations of church groups and Scouts. He was also an avid fisherman, from the Mettowee River to the rivers and shores of Alaska. During his final year, he skied in Vermont and in Utah with his family and fished in Alaska. After Phil and Polly retired to Poultney, Vermont, in 1987, both became busy in community and church affairs. Phil was tree warden for Poultney, sat on the Board of Green Mountain College and the Vermont Water Quality Board and served several terms as president of the Lake St. Catherine Association. In 2005, Phil and Polly moved from Poultney to Equinox Village in Manchester Center, Vermont. The EV community will remember how Phil Pope’s daily morning greeting to all belied the intrepid outdoorsman hidden beneath. Phil and Polly shared an annual luncheon of fresh-caught salmon for their EV neighbors at the family’s Lake St Catherine home. Neighbors enjoyed their annual Christmas caroling party and sang from books that he and Polly created decades ago. Their signatures in the books joined those of many friends who added their voices to Phil and Polly’s carols over the years. Funeral services will be held at the First Congregational Church of Manchester at 2 p.m. on March 28, 2020. A gathering will be held at the church fellowship hall following the service. A brief graveside interment ceremony will be held on Aug. 1 in Poultney, with a celebration of life to follow at the Lake St. Catherine house. In lieu of flowers, the family asks you to continue Phil’s legacy of charity and volunteerism by donating to the charity of your choice in his memory.