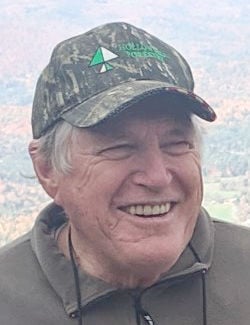 Randy A. Page SHREWSBURY — Randy A. Page, 69, died unexpectedly Feb. 3, 2020, in Shrewsbury, Vermont. He was doing what he loved best – being out in nature on his tractor alongside his sweetheart. Randy was born in St. Johnsbury, Sept. 30, 1950, son of Sewell A. and Adell (Bailey) Page. He graduated from Newbury High School, served in the U.S. Air Force during the Vietnam War, and obtained his degree in Forestry from Lake City Community College in Florida. He married Deena (Harmer) Page in the Washington, DC, Temple on May 1, 1975. He spent his career as a forester for International Paper Co. Randy was known to always have a pocket knife, handkerchief and tape measure. His devoted service as a minister in The Church of Jesus Christ of Latter-day Saints influenced countless individuals and youth. He lived his life giving quiet service to everyone, never asking for recognition or anything in return. His greatest love was being a husband, father and grandfather. Survived by his wife of 44 years, Deena (Harmer) Page, 65, of Shrewsbury; three sons, Micah Page (Xinru) of Sharon, Massachusetts, Todd Page (Gina) of Berlin, Seth Page (Caitlin) of Hinesburg; three daughters, Winter Francia (Steve) of Wilton, Connecticut, Summer Karimnejad (Kaveh) of Mankato, Minnesota, and Heather Cote (Dany), of Shrewsbury; a brother, Stephen Page of Thetford; two sisters, Donna Carlson of Burlington and Carol Welch of South Ryegate; and 18 energetic grandchildren. He was predeceased by his parents and a brother, David Bailey. A funeral service will be held at 10 a.m. Saturday, Feb. 8, 2020, at The Church of Jesus Christ of Latter-day Saints, 637 North Shrewsbury Road, North Clarendon, VT 05759. Burial will be held at a later date in Groton Village Cemetery. Arrangements are by the Clifford Funeral Home.

My heart And prayers go out to Deena, his Family and friends. Randy was a wonderful Person and will be missed!! R.I.P.

We just learned about Randy. I have not seen him for awhile, but have fond memories of times that we spent together in scouting. Our whole family is thinking about Deena and their family. He was truly one of the good guys with a warm smile and never too busy to listen or help someone out. He will be missed by many.