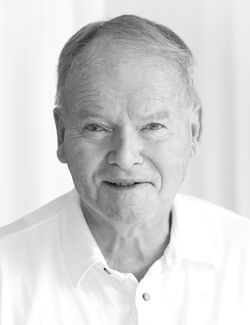 Raymond A. Packert LAS VEGAS, Nev. — Raymond Allan Packert, 86, died peacefully Feb. 6, 2021, at Nathan Adelson Hospice in Las Vegas, Nevada. He was born Jan. 2, 1935, in Dedham, Massachusetts, the son of Edward Packert and Louise (Lunderkin) Packert. Raymond graduated from Dedham High School, Class of 1953. Following graduation, he served with the U.S. Air Force in Albuquerque, New Mexico. He was honorably discharged in 1957. While in Albuquerque, he attended the University of New Mexico, where he earned his bachelor’s degree. He then moved back to Dedham, Massachusetts, and taught art at Norwood High School for many years while also earning his master's degree from Bridgewater State University. After teaching, he became the assistant principal at Mohawk Trail Regional High School in Shelburne Falls, Massachusetts; from there, he moved to Springfield, Vermont, and was principal at Black River High School in Ludlow, Vermont. In addition to his parents, he was predeceased by a brother, Donald Packert; and daughter, Janet Packert. Surviving, in addition to his wife, Marie (Antognetti) Packert, are his sister, Dorothy Rideout of Estero, Florida; his son, Robert and his wife, Lori, of Danvers, Massachusetts; his son, William Packert and his wife, Marianne, of Las Vegas, Nevada; daughter, Laurel Stiles and her husband, David Stiles, of Las Vegas, Nevada; three grandchildren, Phillip Packert of Las Vegas, Nevada, and Kyle Packert and his wife, Caitlin, of Hudson, Massachusetts, and Vincent Stiles of Las Vegas, Nevada; and many nieces and nephews. Arrangements by Desert Memorial in Las Vegas, Nevada. Those who wish to remember Raymond in a special way may make gifts in his memory to the American Diabetes Association.