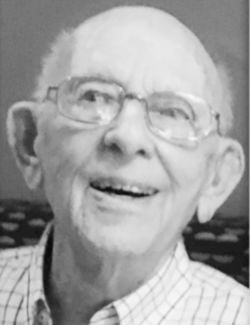 Raymond Joseph Burke RUTLAND — Raymond Joseph Burke, 98, formerly of The Maples in Rutland, passed away at The Pines on Friday, May 15, 2020, after a brief illness. He was born Nov. 29, 1921, the son of Raymond F. and Teresa (Regele) Burke of Rutland. He graduated from Rutland High School, enlisted in the U.S. Army Air Corps, and served as an Airborne Radar Observer, 418 Night Fighter Squadron, in the southwest Pacific during World War II. He was honorably discharged as a 1st Lieutenant in 1945, a patriotic and proud member of the “greatest generation.” He married Margaret Mary “Peg” Connors on April 19, 1945. Ray’s career at Central Vermont Public Service Corp. (CVPS) spanned 38 years, working first as a draftsman and retiring in 1983 as assistant distribution coordinator engineer. He was also a talented sign painter, lettering signs on vehicles, offices and stand-alone structures for many years. After retirement, Ray turned his hand to oil painting landscapes, winning first prize at the Rutland Fair one year. Many friends and family members display one or more of his paintings in their homes. Ray was a member of the Immaculate Heart of Mary Church and the American Legion Post 31. He enjoyed bowling, golfing, fly fishing and other sports. An avid Red Sox and Patriots fan, he rarely missed watching a game. He was a devoted husband, caring for his wife at home through a lengthy illness, later visiting her daily while she resided at The Pines. Ray will be greatly missed by his four children for whom he was a patient and kind role model throughout his life. He was a loving “Grampa” to his two grandchildren. Ray had a wonderful Irish sense of humor and kept busy golfing, bowling and volunteering with the Rutland Regional Medical Center until well into his 90s. He especially enjoyed dining out, dancing and a Manhattan cocktail in the evenings. He also had a beautiful singing voice and reminded the family of Bing Crosby when he sang. Always positive and cheerful, he walked to work most of his life, whistling as he left the house and stopping to pet the neighborhood dogs. He could play a mean harmonica, and entertained his children and grandchildren with magic tricks. He leaves behind his four children, John R. Burke (Janet) of Bellingham, Massachusetts, Thomas J. Burke (Robert Patton) of Castleton, Mary Ann Ballard (Bob) of Benson, and Joanne Burke Casey (Walter) of Amesbury, Massachusetts; two grandchildren, Megan Casey and Jay Burke; and a brother, Richard Burke (Jackie) of Minnesota; as well as special friends, Pat Brisson, Dick White and John Burns (who delivered scrumptious homemade cookies every Christmas); special nephew, Peter Burke, and many other nieces and nephews. He was predeceased by Peg, his beloved wife of 64 years, in 2009; and by his sisters, Beverly Cote and Joyce Bottis; a brother, Gordon Burke; and companion, Mary Manfredi. There will be no calling hours. Memorial services will be held at a future date. In lieu of flowers, contributions may be made to the Rutland County Humane Society, 765 Stevens Road, Pittsford, VT 05763; or Immaculate Heart of Mary Church Renovation Fund, c/o Christ the King Church, 66 South Main St., Rutland, VT 05701. Arrangements under the direction of Clifford Funeral Home in Rutland.