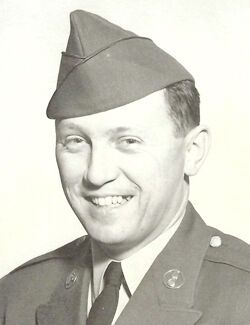 Richard A. Willette SPRINGFIELD — Richard Allen “Rich” Willette, 89, died Sept. 21, 2020. He was born March 12, 1931, in Springfield, the son of Edward C. and Ruby (Leeman) Willette. He graduated in 1948 from Springfield High School, completed the Co-op Course in 1950 and went to work for Fellows Gear Shaper Co. building large gear cutting machines. Mr. Willette was a U.S. Army veteran of the Korean War serving with the 106th Ordnance Heavy Maintenance Co. He spent nine years in the Army Reserves, leaving at the rank of Staff Sergeant. After returning from Korea in 1951, he returned to Fellows, transferred to the tool design department and eventually became foreman. He was a tool designer with Sturm, Ruger & Co. in Newport, New Hampshire, for 35 years, retiring in 2007. He married Rose Parizo in October 1951; they later divorced. He next married Pamella Mahoney in October 1967; they later divorced. Mr. Willette was a member of St. Mary’s Catholic Church in Springfield, Gun Owners of America, Law Enforcement Alliance of America and the American Legion. He was an avid poker player and held many offices with the Barbershop Quartet Society, including Northeastern District Vice President of Division V chapters in Maine, New Hampshire and Vermont. Survivors include his former spouse, Pamella, and their two children, Allen Willette of Kentsville, California, and Christine Cram of Websters Grove, Missouri; a sister, Jeanne Sysko of Springfield; numerous nieces and nephews. He was predeceased by two brothers, Francis Willette of Cincinnati, Ohio, and George Willette of Brattleboro; and a sister, Berniece “Niecie” Willette Capen of Springfield. In lieu of flowers, memorial contributions may be made to St. Jude Children’s Hospital, P.O. Box 50, Memphis, TN 38101-9929; or St. Mary’s Catholic Church, 10 Pleasant St., Springfield, VT 05156. Arrangements are by Davis Memorial Chapel.