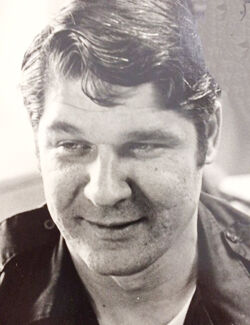 Robert E. McConnell CLARENDON — Robert E. McConnell, 80, of Clarendon, died Friday, Jan. 8, 2021, at his residence following a battle with a blood disorder. He was born July 9, 1940, in Newark, New Jersey, the son of Robert "Gene" and Edna (Gelpke) McConnell. He attended local Newark schools. After high school, he entered the Navy, where he acquired, what would be a lifetime passion for firefighting and firefighters. On leave from the Navy, he was introduced to his loving wife of 49 years, Joyce, by his sister, MaryAnn, forever bragging, "It was Love at first sight." After a brief courtship, they were married in 1963, on the day following the assassination of President John F. Kennedy. Mac was a proud firefighter, serving as a state FMBA delegate for many years, which he truly considered an honor. He was as passionate fighting for his family, relatives and firefighting buddies, as he was about fighting fires. He enjoyed many hobbies and activities, especially, coin and sports card collecting, hunting and fishing, card games, bowling, gold panning, and hobby planes, bird watching, landscaping and building things together. Most of all, he loved doing all of those things with us, his family, his relatives and his firefighting buddies, and weaving those memories into a tapestry of stories which everyone who shared their lives with him, will forever remember. For his stories were never about himself, they were about all of us. May you rest in peace, with your beautiful wife, and forever more share your love and stories together in heaven. Robert is survived by his sons, Stephen of West Rutland, James and Kevin, both of New Hampshire; five grandchildren; his sister, Mary McConnell of Massachusetts, and a brother, Ken McConnell of New Jersey. He was predeceased by his wife, Joyce, in 2013; brother Dan McConnell; sisters MaryAnn McConnell and Susan Speller. Calling hours will be held from 4 to 6 p.m. on Tuesday, Jan. 12, at the Aldous Funeral Home, 44 North Main St. in Rutland. A funeral service will be held at 11 a.m. on Wednesday, Jan. 13, at Christ the King Church in Rutland. He consistently gave to a wide variety of charities, multiple times per year to each, including The Vietnam Veterans Memorial Fund, St. Jude's Research Hospital, Make a Wish Foundation, Boystown, Paralyzed Veterans of America and Vermont Catholic Charities. Memorial contributions may be made to any of these charities.