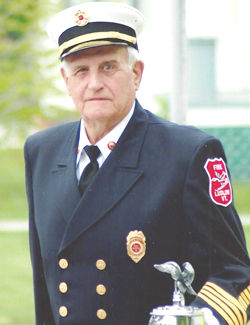 Robert William Kirkbride LUDLOW - Robert William Kirkbride, 93, left this earth on March 19, 2020, to join his wife and son. He was born on June 9, 1926, in Burlington, the son of Robert O. and Genevieve (Donahue) Kirkbride. Losing his father at the age of three, Bob and his sisters, Mary and Ruth, were raised in a devout Catholic home, attending Mass almost daily. Bob attended Catholic schools under the watchful eyes of nuns and priests. His strong work ethic started at a young age, cleaning the church, sweeping floors at various shops and stuffing hot dogs at McKenzie Meat Company. He left Cathedral High School after his junior year to answer the call of duty, enlisting in the U.S. Army to serve in World War II in Japan. Upon returning, he completed high school and then worked as a police officer in Burlington. He re-enlisted in the U.S. Air Force to serve in the Korean War. On Sept. 6, 1952, he married Patricia A. Martel in Ludlow, leaving Burlington to begin a new chapter. He worked at General Electric for seven years before joining Martel and Son Oil Company after the passing of his father-in-law. Not wasting any time, Bob quickly became involved in the Ludlow Rotary Club, Ludlow Fire Department and the Knights of Columbus, remaining active right up until his passing. He worked well into his 80s for Johnson and Dix Oil Company, summers at Fox Run Golf Course, winters at Okemo and part-time at Napa. His meticulous record keeping was invaluable. Bob’s lawn was the envy of the neighborhood, and he snow-blowed with precision. He was generous with his talents, tools, equipment, time and stories with his neighbors, friends and family. Bob was extremely devoted to his family, church and community. His hard work, honesty, commitment, love, laughter and generosity will continue through the lessons he taught us. He was a pillar in the community and a prime example of “doing things right.” Bob is survived by two daughters, Deborah Khiel and fiancé Michael Fortin of Sweden, Maine; Martha Chessie and husband Christopher of Shapleigh, Maine; six grandchildren, Travis Khiel and wife Rebecca; Greg Khiel; Caleb Chessie and wife Abigail; Meredith Chessie; Robert J. Kirkbride; and Joseph Kirkbride; seven great-grandchildren, Kaenon, Grady, Blake, Addyson, Lane, Brynnley and Maverick; and many nephews, nieces and countless friends. He was predeceased by his wife Patricia, son Robert R., infant son Raymond and sisters Mary and Ruth. Services will be held at a later date. The family would like to thank the Ludlow community and the entire staff in the ICU at the White River Junction VA Medical Center for the compassion, respect, support and love during this most difficult time. Pray for a cure to stop the outbreak of the COVID-19 virus. Memorial contributions in Bob’s memory may be made to Ludlow Rotary Club, PO Box 216, Ludlow, VT 05149. Arrangements are under the direction of the Davis Memorial Chapel in Springfield.

A great friend of our family for many yrs. He will be missed by so many !! RIP