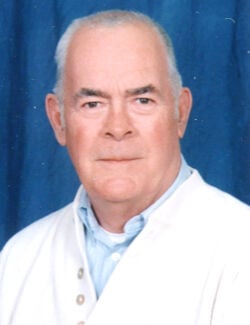 Roger M. Pike RUTLAND — Roger Mason Pike, 79, of Rutland, Vermont, passed away peacefully on Oct. 7, 2020, after a brief illness, in McClure Miller Respite House in Colchester, Vermont. Born on Oct. 9, 1940, in Rutland, he was the son of Edward S. and Frances O. (Mason) Pike. He attended Rutland public schools, graduating from RHS with the Class of 1958. He graduated from Colgate University in 1962. On June 23, 1962, he married Gretchen Miller in Rutland, and entered the United States Air Force as a Lieutenant on July 3, 1962, in Wichita, Kansas. He remained in the United States Air Force Reserves until 1990, retiring as a Lieutenant Colonel. He and Gretchen returned to Rutland in 1965 where he assumed his role in the family business, Kinney Pike Bell and Conner, with his father and brother, retiring in 1996. Upon his retirement, Roger and Gretchen spent time traveling around the United States, visiting many National Parks, as well as living part time in Bisbee, Arizona. In his later years, Roger, among many things, loved to research his ancestry and drive the scenic back roads of Vermont. He also looked forward to his family’s Christmas Eve get-together, where he was often able to hold court as he spoke about the many particulars of Rutland’s history. Roger was active during his life in many civic, Masonic and service groups, serving in a variety of roles, including Rutland City Alderman, serving on the boards of the Rutland City Planning Commission and Vermont National Bank, a Rutland City call fireman, a member of Rutland Lodge #79 F&AM, Davenport Chapter #17 Royal Arch Masons, Grand Chapter of Vermont, Royal Arch Masons, Davenport Council #12 Royal and Select Masters, Grand Council of Vermont, Royal and Select Masters, Killington Commandery #6, Knights Templar, Grand Commandery of Vermont Knights Templar, Knights of the York Cross of Honour – Vermont Priory #45, Shriner – Cairo Temple, Camel Corps, Royal Order of Jesters Ct #105, Rutland County Agricultural Society, Rutland Elks Lodge #345 and the Rutland Kiwanis Club. In addition to his parents and stepmother Cecile Reilly Pike, he was predeceased by Gretchen, his wife of 51 years, in 2013. He is survived by a son, Edward M. “Ned” and wife Laurie of Colchester; a daughter, Deborah Creed and husband Christopher of Rutland; three grandchildren, Emily Pike of Colchester and Courtney and Matthew Creed of Rutland; brother Edward C. “Ned” Pike and wife Lauren of Vermont and Florida; stepsister Donna Fiske of Proctor; as well as many cousins, nieces and friends. Due to COVID-19, there will be no calling hours. The memorial service will be held at 11:30 a.m. on Wednesday, Oct. 14, 2020, in Grace Congregational Church UCC, 8 Court St., Rutland. A private burial will be held in Evergreen Cemetery. Memorial contributions, in lieu of flowers, should be made to the McClure Miller Respite House, c/o UVM Health Network – Home Health and Hospice, 1110 Prim Road, Colchester, VT 05446; or to an organization of your choice. Tossing Funeral Home is in charge of the arrangements.

Roger was quite an accomplished man. Thank you for sharing his obituary. Sending my condolences to the family near and far. May he rest in eternal peace with Gretchen.

I’m so sorry to see this news about your Dad. I loved bumping into him around town, such a nice guy who always had a smile on his face. May all the great memories help you through this difficult time. Love and hugs to all of you.

I shared most my Monday nights in my early years in Rutland with Roger at Kiwanis Club meetings. He was a brilliant, accomplished man with an inquisitive mind and an offbeat sense of humor. In later years it was always good to run into him around town. Condolences to the family. RIP, Roger.

Our condolence to the family, May he be greeted with open arms to the next journey of human life. RIP

Ned and family, we are so sorry for the loss of your father and offer our sincere condolences.