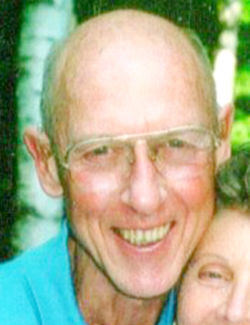 Ronald M. Heaton RUTLAND TOWN — Ronald M. Heaton, 89, of Rutland Town passed peacefully on May 18, 2020, at his son’s home, surrounded by his family. Ron was born April 9, 1931, in Pawtucket, Rhode Island, the son of Lemuel W. and Lois B. (Price) Heaton. He graduated from Pawtucket High School, attended Tufts University undergraduate and after three years, he received an early acceptance into Tufts University School of Dental Medicine. In 1954, he married Barbara J. Carlson and after his 1955 graduation from dental school, they moved to Cherry Point, North Carolina, as Ron began three years of service as a dental officer in the U.S. Navy Dental Corps. Upon his completion of service, Ron and Barb returned to Providence, Rhode Island, for three years while Ron practiced as an associate dentist. His love of the outdoors brought them to Vermont in 1961 where they lived for the rest of their lives. Ron began his own dental practice in Rutland in 1961 and was instrumental in improving the oral health of the community. He was an avid skier until his early-80s and knew Killington Ski Mountain like the back of his hand. His love of the outdoors and Vermont resulted in his extensive knowledge of every hiking trail, lake, mountain, state park and back road in all of Vermont. He and Barbara traveled to, and camped in, every National Park throughout their years together. For those who knew Ron, you could ask him anything and he knew the answer. He was a very knowledgeable and voracious reader. Ron is survived by his daughter, Diane L. and Terry Heaton-Jones of Gainesville, Florida; his sons, Douglas and Karen VanWyck Heaton of Cornish, New Hampshire, and Dr. David Heaton and Dr. Judith Fisch of Rutland Town. He is also survived by his loving grandchildren, Garret Heaton and wife Meredith Ferguson, Erik Heaton, Rebecca and Peter Hamilton, Alexander, Patrick and Connor Heaton; and his great-grandchildren, Theodore Heaton, Mary Heaton and Vann Hamilton; as well as several nieces and nephews. He was predeceased by his wife of 60 years, Barbara; his brothers, Robert P. Heaton and Richard B. Heaton; and his granddaughter, Sarah E. Heaton. At his request, there will be a private family remembrance. Memorial contributions may be made to Visiting Nurses Association & Hospice of the Southwest Region, Vermont, at www.vermontvisitingnurses.org.

May he be greeted with open arms to the next journey of human life . my condolences to the family . RIP Mr Heaton Musky

I will always have fond memories of visiting Doc Heaton. He was a very kind man. My sincerest condolences to your family. Mary Lou Foy Alther, Keene, NH