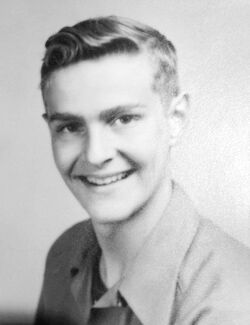 Ronald R. Burns WHITEHALL, N.Y. — Ronald Robert Burns, 87, of Stalker Road, passed away comfortably in his home with his son, Kevin, at his side on Oct 5, 2021. He was predeceased by his wife, Inez Susanne Burns; and brother, William Burns. His survivors include daughter Laurel Burns and partner Robert Henrichon, granddaughter, Amanda Burns; his son, Kevin Burns and daughter-in-law Ann Burns, grandson Grant Burns and granddaughter-in-law Keri Burns, great-grandsons Dalton and Knox Burns, granddaughter Weslie Burns, grandson Dylan Burns; daughter Heather Lynch and son-in-law John Lynch, granddaughters Cecilia Lynch and Joan Durkin; son Christopher Burns and daughter-in-law Susan Burns, grandchildren Christopher Burns Jr., Claire, Collin, Caroline and Caleb Burns; daughter Jennifer Gordon and son-in-law Kyle Gordon; brother-in-law and sister-in-law Paul and Carol Christie; sister-in-law Linda Fagerquist; and many nieces and nephews. Ron was born in Whitehall, New York, in 1934, and graduated from Whitehall High School in 1952. He was a Korean War veteran in 1953. He attended Providence College on the GI Bill and graduated with a bachelor's degree in 1959. After graduation, Ron got a summer job at Hulett's Landing Hotel in Lake George, as a waiter. It was here that he met his lifelong partner and wife, "Susanne." He married "Susanne" in 1959 and they were married until her passing in 2015. In his early career, he worked for the Hartford Insurance Co. in Hartford, Connecticut, and resided in Dudley, Massachusetts, with his family until the sudden death of his father, "Buster" Burns, in 1968. At this time, he relocated his family back to Whitehall, New York, and assumed his father's business, The WT Burns Insurance Agency, from 1968 until 2008. Ron was 74 when he retired, and he absolutely loved his work. He was well-known in the community for his vast, extensive knowledge in the insurance industry and was known to have a wonderful sense of humility, as well. If he didn't have an honest, direct answer to one's specific question, he would simply say, "If I don't know it, I'll find out!" While residing in Whitehall, Ron was the president of the Board of Education for the Whitehall Central Schools for several years in the late-'70s and '80s. He was also an active member of the Skenesborough Rescue Squad, a catechism instructor, and a member of the Whitehall Booster Club. Some of his loves and passion included fine foods and travel, gardening, bird watching, long rides, often with a car full of kids singing "You are My Sunshine," "King of the Road" and “I Know an Old Lady who Swallowed a Fly.” Ronald was also known as the "Friday Night Sleep Over Grampy." Every Friday night, he would entertain the grandkids with movies and McDonald's Happy Meals. Some of his experiences included trips to Montreal, and Aruba with good friends. He was also fond of his several trips to Nova Scotia with his family. He frequently remarked, ”Do it while you can, Kid!” His witty, dry humor could often take one by surprise but for Ron, it was simply a fun time to jostle and banter with friends and family. Ron was well-known in the grocery stores and fabric stores, i.e., JOANN Fabrics, Sew-Fro Fabrics, Stewart's, Grand Union and CVS. His wife, Susanne, was skilled in quilting and sewing and as such, Ron made several daily stops to the local shops for thread, material, assorted fabrics and the like. Ron had a great eye for design and color; consequently, Susanne always felt quite confident he would return with the goods. And, indeed, he did. However, Ron was very adept at lengthy conversation with the locals and employees at these various shops and would sometimes take perhaps longer than needed to pick out two spools of thread. Ron loved reading newspapers and made daily stops to Stewart's, picking up his Daily News, New York Post, The Post Star and The Whitehall Times. In addition, Ron and Susanne had passion for dancing, especially the jitterbug! They were very instrumental in organizing and arranging the annual Armory Balls which included such famous artists as Louis Armstrong and Lionel Hampton. Summertime held special memories for Ron's family and friends during their yearly summer camp fest at Hulett's Landing on Lake George, New York. Friends included the Yules, Colombs, Gradys and Woodcock families, otherwise known as "The Woodchucks!" Every year, they would all come back to the same spot and enjoy Lake George's beauty. They would water ski, enjoy fireworks, go camping, fishing and swimming. In closing, the family is having a private family Celebration of Life for Ron on Lake George. Ron's entire family would like to thank Dr. Bradley Berryhill and staff at the Castleton Community Health Center, also Ron's son, Kevin, and his daughter-in-law, Ann, for their compassionate care and their unwavering support. In lieu of flowers, given Ron's love of birds and nature, please consider a donation to the National Audubon Society: https://www.audubon.org Toll free phone number is: (844) 428-3826. Ron’s arrangements are under the care of the Jillson Funeral Home Inc., 46 Williams St., Whitehall, NY 12887. Online condolences may be made at www.jillsonfuneralhome.com * And remember — “Do it while you can, Kid!”