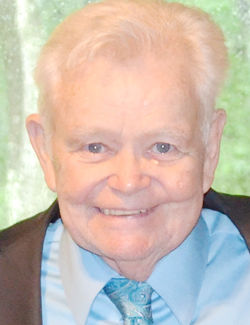 Theodore F. "Ted" Lindgren SPRINGFIELD — Theodore Fritz "Ted" Lindgren, 96, died Jan. 24, 2020, at Springfield Health and Rehab, with family by his side. He was born Dec. 9, 1923, in New York City, the son of Fritz and Alice (Sundgren) Lindgren. He graduated in 1942 from Springfield High School. He married Florence Morrison June 20, 1942. Mr. Lindgren enlisted in the U.S. Army and served in the European Theater during World War II. He was a member of Robert L. Johnson Post #771 VFW and served as both state and post commander. He owned a dairy farm and was later employed as a U.S. postal carrier. After retiring, he served as a representative to the Vermont State Legislature for 12 years and was appointed to the Vermont Department of Corrections Parole Board for 10 years. He was a former member of the Springfield Selectboard. Mr. Lindgren served as a deacon and trustee of Calvary Baptist Church. Survivors include his wife and seven children, Jack Lindgren of Jupiter, Florida, Linda Fletcher of Port St. Lucie, Florida, Karin Greenawalt of Aurora, Illinois, Lance Lindgren of South Newfane, Jeff Lindgren of Johnson, Ted Lindgren of Renfrew, Pennsylvania, and Jennifer Anderson of Springfield; three sisters, Roberta Griswold of Pennsylvania, Dorothy Grover of Sumter, South Carolina, and Donna White of Danvers, Massachusetts; 16 grandchildren and 33 great-grandchildren. The funeral service will be held at 11 a.m. Saturday, Feb. 15, at Calvary Baptist Church in Springfield. Burial with military honors will follow in Oakland Cemetery. In lieu of flowers, memorial contributions may be made to VFW Post 771 or Calvary Baptist Church. Arrangements are by Davis Memorial Chapel in Springfield.

Ted Marge & Family, so sorry to read the loss of youre Dad . Prayers are with you all. God Bless. Sheila & Neil Crossman