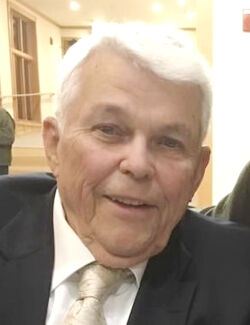 Thomas C. Aicher RUTLAND — Thomas C. Aicher, 86, died Jan. 10, 2022, at home, surrounded by the love of his family. He was born March 17, 1935, in Jamaica, Queens, New York, son of the late Charles N. and Anne Gleeson Aicher. He grew up in Rockville Centre, Long Island, where he attended Chaminade High School. But it was Vermont that captured Tom’s heart and soul. While attending Saint Michael’s College, Tom met his future wife, Barbara, on a blind date. They were married Jan. 17, 1959, at Christ the King in Rutland. After living in Long Island for a brief time, they returned to Rutland where they raised five children and celebrated a most extraordinary 63 years together. Family was everything to Tom. Tom was a member of the U.S. Army Reserves, and a proud retiree of Central Vermont Public Service, where he worked for 34 years. In retirement, he enjoyed working at Woodstock Ace Hardware, and become known as “the technician” for his skills with tools and tinkering. Tom enjoyed an active, outdoor life through all seasons. He was an avid golfer, skier, sailor, and made lifelong friends through his many adventures. Some of his favorite places included Proctor-Pittsford Country Club, Lake Bomoseen, the Maine coast, the Caribbean, Myrtle Beach, Hawaii and Pico Peak. He was a member of the Pico Ski Club and the Otter Ski Patrol for many years. He served as the club’s president in 1978, as patrol director from 1982 to 1987, and was a regional section chief for the National Ski Patrol for several years. He also served for many years as treasurer of the Pico Ski Education Foundation. Tom was an inspiration and a role model to his children and their friends, and was loved and respected by everyone who knew him. His sense of humor, supportive nature, hospitality and ready smile will be deeply missed by his family and friends, and his shuttle rides in the golf cart up #16 will be sorely missed by his foursome, Dave, Frank and Jim. He is survived by his wife, Barbara (Perry) Aicher, of Rutland; two sons, Thomas P. Aicher, of Castleton, and Michael J. Aicher, of Warren; two daughters, Katherine A. Aicher, of North Clarendon, and Susan M. (Robert) Ellingwood, of Maui; a son-in-law, Ray Rouleau, of Burlington; a brother, John G. Aicher, of Southold, New York; six grandchildren, Nicole (Brian) Gines, Kinsey (Kalai) Watson, Christian Rouleau, Evan Rouleau, Ali Rouleau and Jack Aicher; four great-grandchildren, James Kayden and Izabella Gines, Enna and Izeck Watson; and an extended family of much-loved nieces, nephews and cousins. He was predeceased by his daughter, Dr. Barbara J. Rouleau, in 2017; and sister, Jeanne Datz, in 2017. A Mass of Christian Burial will be celebrated at Christ the King Church on Friday, March 18, at 10:30 a.m. A celebration of a life well-lived will follow. Memorial contributions may be made to The Dr. Barbara Rouleau Student Emergency Fund for Nursing (go.uvm.edu/Rouleau); or to the Pico Ski Education Foundation, P.O. Box 6740, Rutland, VT 05702, or at  picoskifoundation.org. Arrangements are by Clifford Funeral Home.

I’m sorry to read this, TOM was a very nice man and contributed a great deal to our community

My condolences to the family and friends. May he be greeted with open arms to the next journey of human life. RIP Tom , Musky

Barb, Kathy, Susie, Tommy & Mike, We are saddened to hear of Tom’s passing and offer our sincere condolences. Barb, we feel so blessed to have shared time and special memories with you and Tom at Hinkum this summer. Our families had so many happy times together growing up. We will miss Tom’s smiling face at PPCC. May you be comforted by precious memories and the knowledge that he is now with Barbie and our loved ones. All our love, Lynn & Reggie Colomb