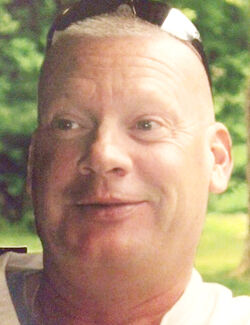 Timothy P. Tuttle WEST RUTLAND — Timothy Peter Tuttle, 55, of West Rutland, died Monday, Nov. 15, 2021, at the Dartmouth-Hitchcock Medical Center, after a long battle with liver disease. He was born in Rutland on Dec. 5, 1965. After graduating from Granville High School in Granville, New York, he enlisted in the United States Navy. He served four years in the Naval Reserves. In 1985, he was employed by the Vermont Department of Corrections until joining the Rutland City Police Department in 1986. There, he served proudly until his retirement in 2016 at the rank of Corporal/Road supervisor. Following his retirement, he worked for two years as a Rutland County Sheriff’s Department deputy in the Rutland County Courthouse. He then worked for Modern Cleaners until his illness prevented him from working. Tim was well-known for his barbecues. He was an excellent cook and loved to feed everyone. He was a giving and loving man. He gave endlessly of his time, love, money, help and always, his heart. For many years, Tim played taps for the Rutland Police Department memorial services and countless burial services, taking pride in the comfort it gave to grieving families. Tim is survived by his mother, Joan Tuttle Palmer, and stepfather, Richard Palmer, both of Schenectady, New York; brothers, James, Perry and David; sisters, Brenda, Jill and Cynthia; numerous nieces and nephews; and his beloved dog, Miah. Per Tim’s wishes, there will be no services. A celebration of life will be held at a future date. Arrangements are with the Aldous Funeral Home in Rutland, Vermont. Memorial contributions may be made to the Rutland County Humane Society, 765 Stevens Road, Pittsford, VT 05763.

I am very sad to read this. I did not know Tim nearly as well as my son, but well enough to know he was a caring respectful human being. 🦋

I began Praying 🙏 for Tim when my son Michael told me of his illness. I always thought Tim was an exceptional Police Officer and a kind hearted man.

My Prayers are for his Mom and step Dad and siblings, all his many many wonderful friends and his beloved dog. 🕊️🙏

Fly high with the Angels. It is sad you are gone, but comforting knowing you suffer no more.🕊️🇺🇲

Jesus answered him, "Truly I tell you, today he will be with me in Paradise"🕊️🙏✝️

Hard to realize how fragile life really is. Glad to know that there will be no more suffering. You will be miss.

Rest In Peace Shipmate....Thank you for your service to the United States and to the citizens of Vermont 🇺🇸