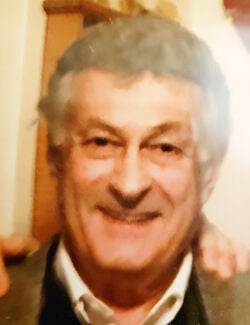 Vito S. DeMarco SPRINGFIELD — Vito S. DeMarco, 81, died Dec. 25, 2021, at his home. He was born in Derby, Connecticut, the son of William and Sue (Ausonio) DeMarco. He achieved Eagle Scout status with Troop 3 in Derby, Connecticut. Mr. DeMarco attended Fairfield Prep and graduated with a degree in political science from Fairfield University in Connecticut. He was employed as a special agent with the U.S. Bureau of Alcohol, Tobacco, and Firearms and achieved level grade 14. He served in the Gulf War as a special assistant to Gen. Norman Schwarzkopf. Returning home, he continued in the Navy Reserves until his retirement as Commander in 1997. Mr. DeMarco married Catherine Schoener Aug. 29, 1994, in Korea. In Springfield, he served in many positions as a member of Robert L. Johnson VFW Post 771. He was also a member of St. Mary’s Catholic Church. He was a ski instructor at Okemo Mountain. Survivors include his wife, of Springfield; two sons, Darryl DeMarco, of Port St. Lucie, Florida, William DeMarco, of Milford, Connecticut; two grandchildren; a sister, Angela Bartolucci, of Shelton, Connecticut; several nieces, nephews and cousins. Calling hours are from 4 to 6 p.m. Wednesday, Jan. 12, 2022, at Davis Memorial Chapel, 99 Summer St., Springfield. The funeral Mass will be celebrated 11 a.m. Thursday, Jan. 13, 2022, at St. Mary’s Church, 10 Pleasant St., Springfield, with Father Peter Williams officiating. Burial with military honors will be at a later date in St. Mary’s Cemetery in Springfield. In lieu of flowers, memorial contributions may be made to Robert L. Johnson VFW Post 771, P.O. Box 568, Springfield, VT 05156.