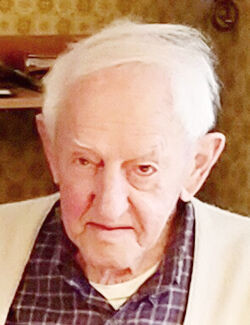 William H. West WELLS — William H. West, 88, passed away on Wednesday, July 7, 2021, at Rutland Regional Medical Center, following a long illness with myelodysplastic syndrome. William was born in Granville, New York, on Feb. 27, 1933, the son of the late Harry and Lila (Capen) West. He was a graduate of Granville High School, “Class of 1951.” William enlisted into the United States Marines Corps in 1953, serving in the Korean conflict. After being released from active duty in 1956, he settled in Connecticut before returning to Wells to assist on the family farm, due to his father’s failing health. He continued to operate the family farm with his brother, Walter, after his father’s death and cared for his mother throughout her life, enabling her to remain in her own home. He was a former member of the Veterans of Foreign War, Post #1653 and the American Legion, Post #323 of Granville, New York. William enjoyed working with his brother in their maple syrup business for many years. He also enjoyed gardening, history, reading, cutting firewood, visiting with others and living on the farm. Besides his parents, he was predeceased by four sisters, Jean Carroll, Winnie Stahlmann, Patricia West and Lucy Franz; and his brother, Warren West. Survivors include his sisters, Elizabeth Bernhardt, of Ashby, Massachusetts, Alice Brindise, of Granville, New York, Marjorie Tarasovich and Janice Jones, both of Wells, Vermont; and his brother, Walter West, of Wells/Middletown Springs, Vermont. He is also survived by numerous nieces, nephews, great-nieces and -nephews and great-great-nieces and -nephews. A committal service will be held at 11 a.m. on Saturday, July 17, 2021, in the Wells Cemetery, Wells, Vermont, with full military honors. Reverend Jerry McKinney, pastor of the United Church of Granville, will officiate. In lieu of flowers, the family requests memorial contributions be made to the Rutland Humane Society, 765 Stevens Road, Pittsford, VT 05763; or donate blood to the American Red Cross. Arrangements are under the direction of the Michael G. Angiolillo Funeral Home, 210 Broadway, Whitehall, NY 12887. To leave an online condolence, visit our website at angiolillofuneralhome.com.