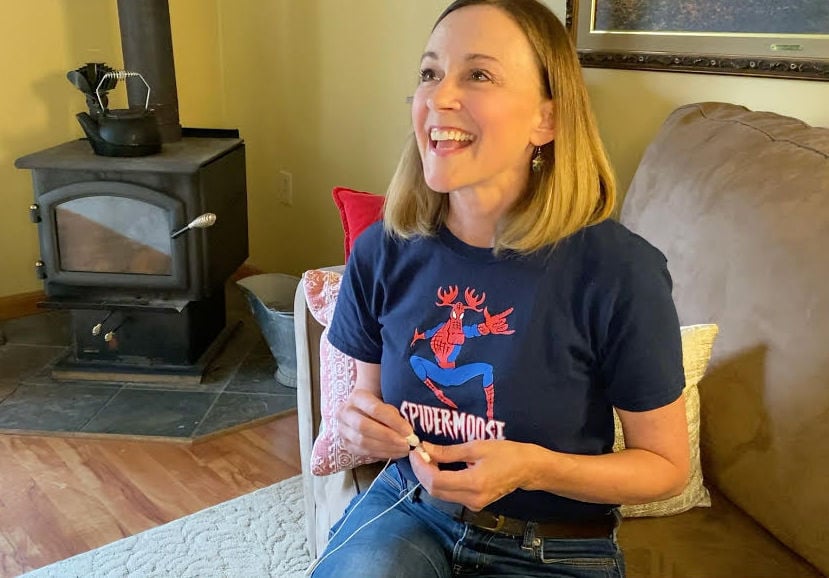 Susan Haefner, in rehearsal in her Little Yellow House Studio in Andover, will present a virtual concert, “Make Yourself at Home,” Nov. 1. 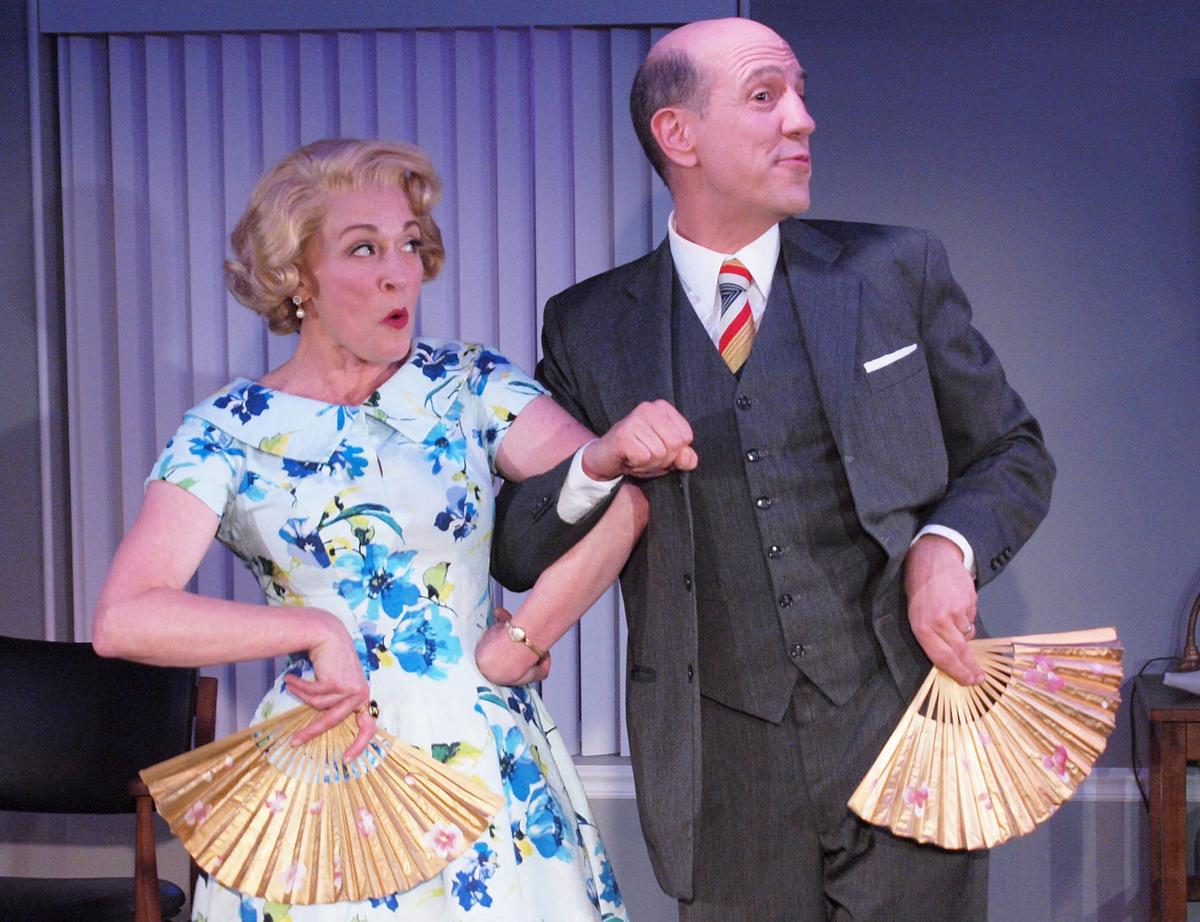 Susan Haefner and the late Sam Lloyd Jr. in the 2017 Weston Playhouse production of “Tenderly: The Rosemary Clooney Musical.” They reprised the roles in January at Playhouse on Park in Connecticut, Lloyd’s last performance.

Susan Haefner, in rehearsal in her Little Yellow House Studio in Andover, will present a virtual concert, “Make Yourself at Home,” Nov. 1.

Susan Haefner and the late Sam Lloyd Jr. in the 2017 Weston Playhouse production of “Tenderly: The Rosemary Clooney Musical.” They reprised the roles in January at Playhouse on Park in Connecticut, Lloyd’s last performance.

Susan Haefner is what is known in theater circles as a “triple threat,” a consummate actress, singer and dancer — to say nothing of director, choreographer, producer and teacher. With a résumé full of Broadway, national touring and regional theater credits, she is one of a handful of theater professionals who have chosen to make Vermont their home base.

And like other actors, with the COVID-19 pandemic, Haefner, a familiar face at Weston Playhouse and Northern Stage in White River Junction, has lost months of union gig work. But that turns out to be a catalyst for broadening her horizons further.

“I just started doing stuff,” she said from her Andover home. “I did a song in a driveway, and then I did another driveway concert, and I just started teaching from home. It kind of snowballed.

“I actually had to set up different little spots in my home to compartmentalize — because I’m being a dramatic actress one day, I’m editing a video the next day, and in another part of my house I’m recording and performing for the camera, and then I’m teaching in my other room,” Haefner said. “It’s been insane! But it’s been good because I’ve been catapulted into this time of creativity.”

The concert will feature traditional folk and old-time songs, plus original tunes written by Lisa Brigantino. A very special surprise guest will lead the sing-along portion of the concert.

“This concert is extremely relaxed — I’m wearing jeans — it’s going to be super-relaxed,” Haefner said. “I even wrote a song to my grandmother, and we’re debuting it in the concert.”

Haefner and the Brigantinos have been singing together since they were students at SUNY Fredonia in Fredonia New York.

“We had a little trio called In the Rough, and we did gigs when we moved to New York City,” Haefner said. “We’ve been singing together for a number of years, so this is a bit of a reunion.”

This is the second concert Haefner has produced in her home. She was scheduled to perform a program for the Friends of Ludlow Auditorium in May, but the pandemic hit.

“The FOLA people said let’s not cancel, let’s do a virtual concert. And that was what gave me the juices to keep going,” Haefner said. “I learned how to use iMovie and Garage Band, and I recorded in my own little studio here.”

Haefner even received an award from Okemo Valley TV. This summer, she taught theater to individuals, and presented educational webinars from her home studio. She also is performing in Marisa Smith’s “The Naked Librarian,” which will be streamed by Northern Stage, along with Chekhov’s “On the Harmful Effects of Tobacco,” Nov. 12-19.

“I’m looking at each project as its own separate entity,” Haefner said. “With this ‘Naked Librarian,’ it’s both dramatic and a little comic, and that’s different than the concert I’m editing right now.”

Haefner knew she wanted to live in Vermont from the first time she worked here in 1988 in Manchester in a production of “The Fantasticks” at what was called the Taconic Music Theater.

“I was living in town and I would walk to rehearsal every day, and I just knew I wanted to live in Vermont,” she said.

At one of the producers’ suggestion, Haefener took her résumé and photo to Weston Playhouse.

“They called me every year after that,” Haefner said. “I ended up working at Weston for the first time in 1991, and I kept wanting to return to Vermont.”

Haefner appeared in eight Weston Playhouse productions, as well as well as six at Northern Stage and four at Shaker Bridge Theatre in Enfield, New Hampshire. (On Broadway, she performed in “42nd Street,” “Thoroughly Modern Millie” and “State Fair”). But it was David and Charma Bonanno, Weston stalwarts that had already moved to Vermont, who pointed the way for Haefner.

“I was on tour with ‘Billy Elliot,’ and I was laid off for seven weeks,” Haefner said. “I had nowhere to live. Everything was in storage. It was a surprise layoff — and I was emotionally looking for a home.”

Haefner had already been saving money for a home in Vermont, and the Bonanos told her of a house on the mountain in Andover.

“Well, I didn’t end up buying that house, but literally four weeks later I bought this little yellow house on Blanchard Road,” she said. “I was on tour for another two years — but I owned the house.”

Everything changed for Haefner after that.

“I knew I had a home, something to invest my time and money into,” she said. “And I already had an artistic home — I was very involved with Weston Playhouse, and I had a lot of friends here.”

Haefner became invested in her new community. She’s now on the staff of The Black River Independent School; with Weston Playhouse and she’s doing a residency with Cavendish; she continues to assist Cathy Archer at Rutland High School. And she sings at the Old Parish Church in Weston, to list just a few.

Haefner still has her agent in New York, but she’s only away three or four times a year, rather than the usual eight or 10.

“Each month something new happens to keep me home,” Haefner said. “I’m grateful, because the only reason I’ve left in the last few years is to go do gigs. It’s getting easier and easier to stay home — which is great!”

Little Yellow House Studio presents “Make Yourself at Home,” a virtual living room concert featuring Broadway veteran and Andover resident Susan Haefner, with special guests Lisa and Lori Brigantino, at 5 p.m. Sunday, Nov. 1, on Okemo Valley TV’s YouTube Channel. The program will also air live on TV at the same time as the YouTube premiere, on local Vermont VTel channel 166 and Comcast channel 1076; after that time, it will repeat on TV. For access or information, go online to okemovalley.tv