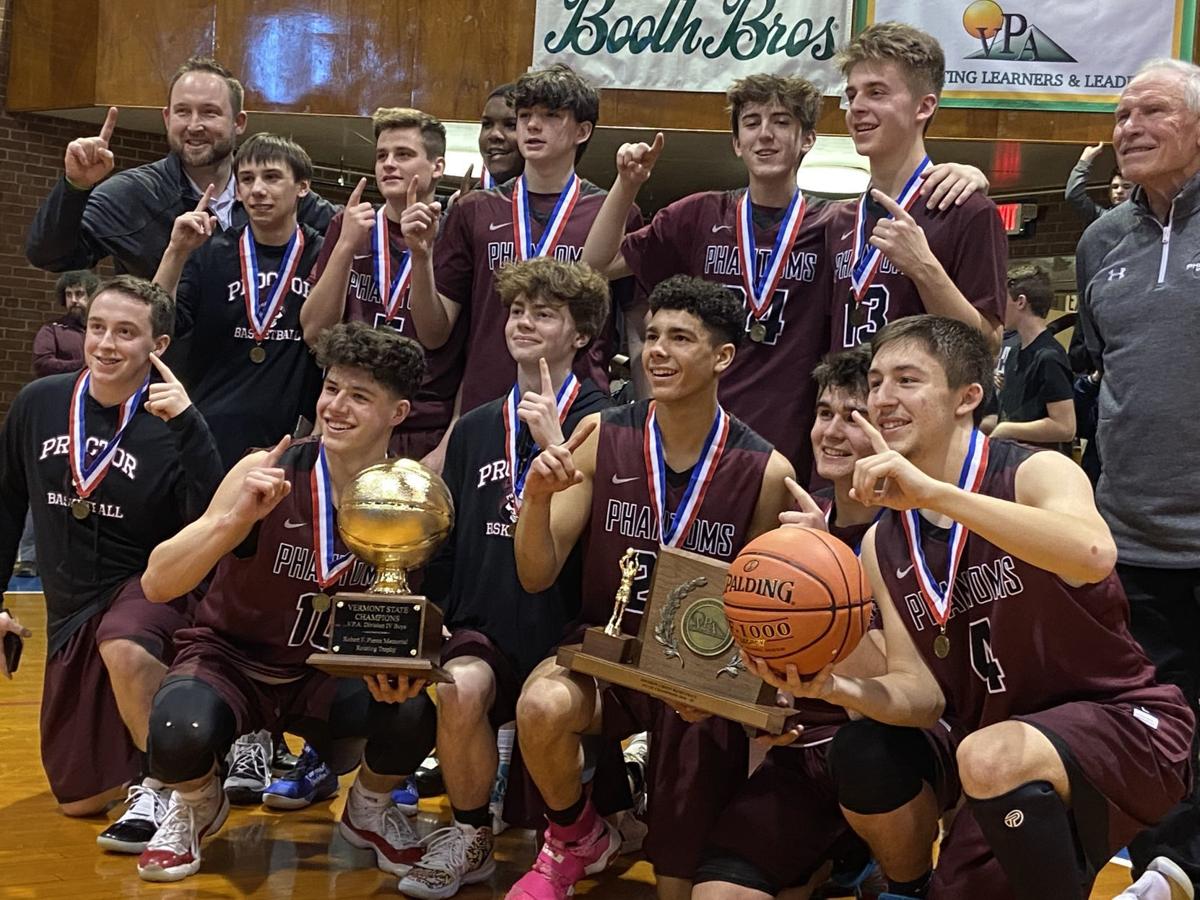 The Proctor boys basketball team poses with the Division IV championship trophy after their 65-50 win against Twin Valley Saturday at Barre Auditorium. 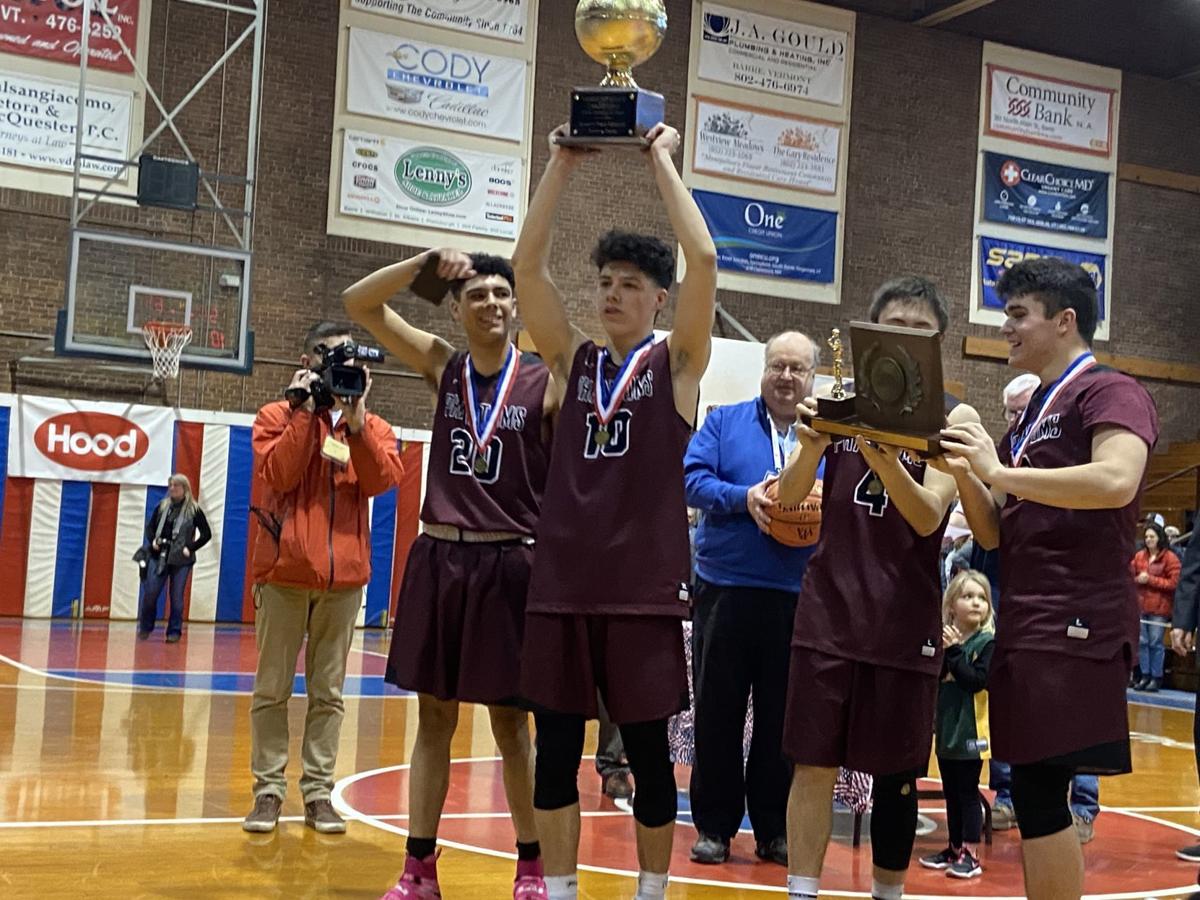 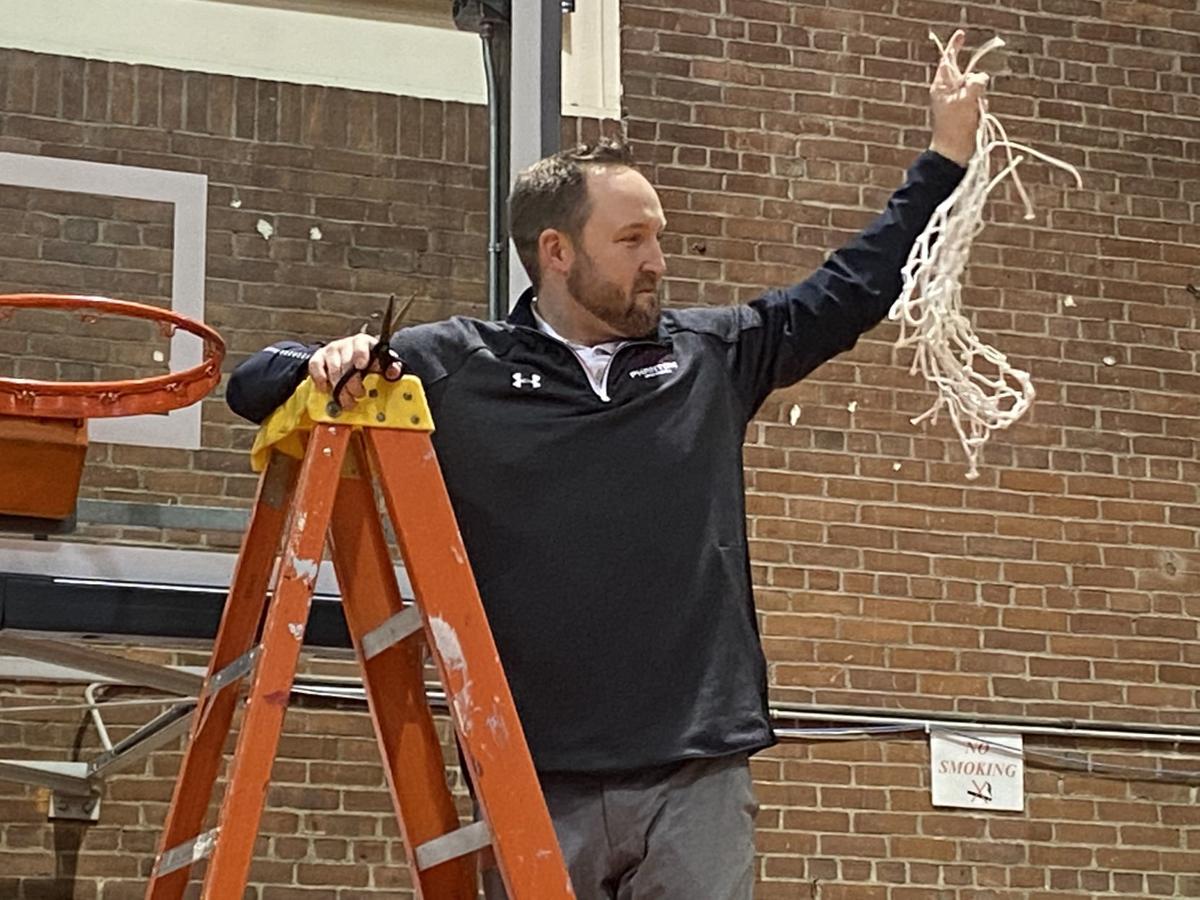 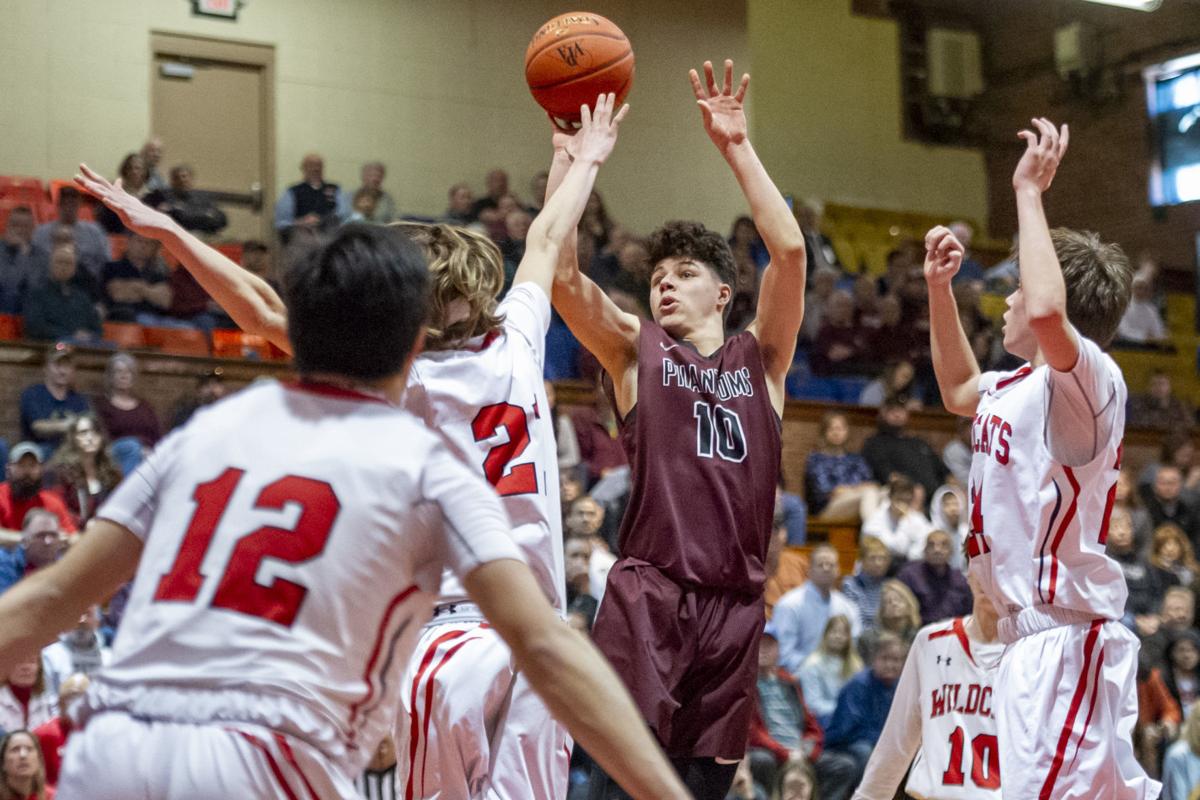 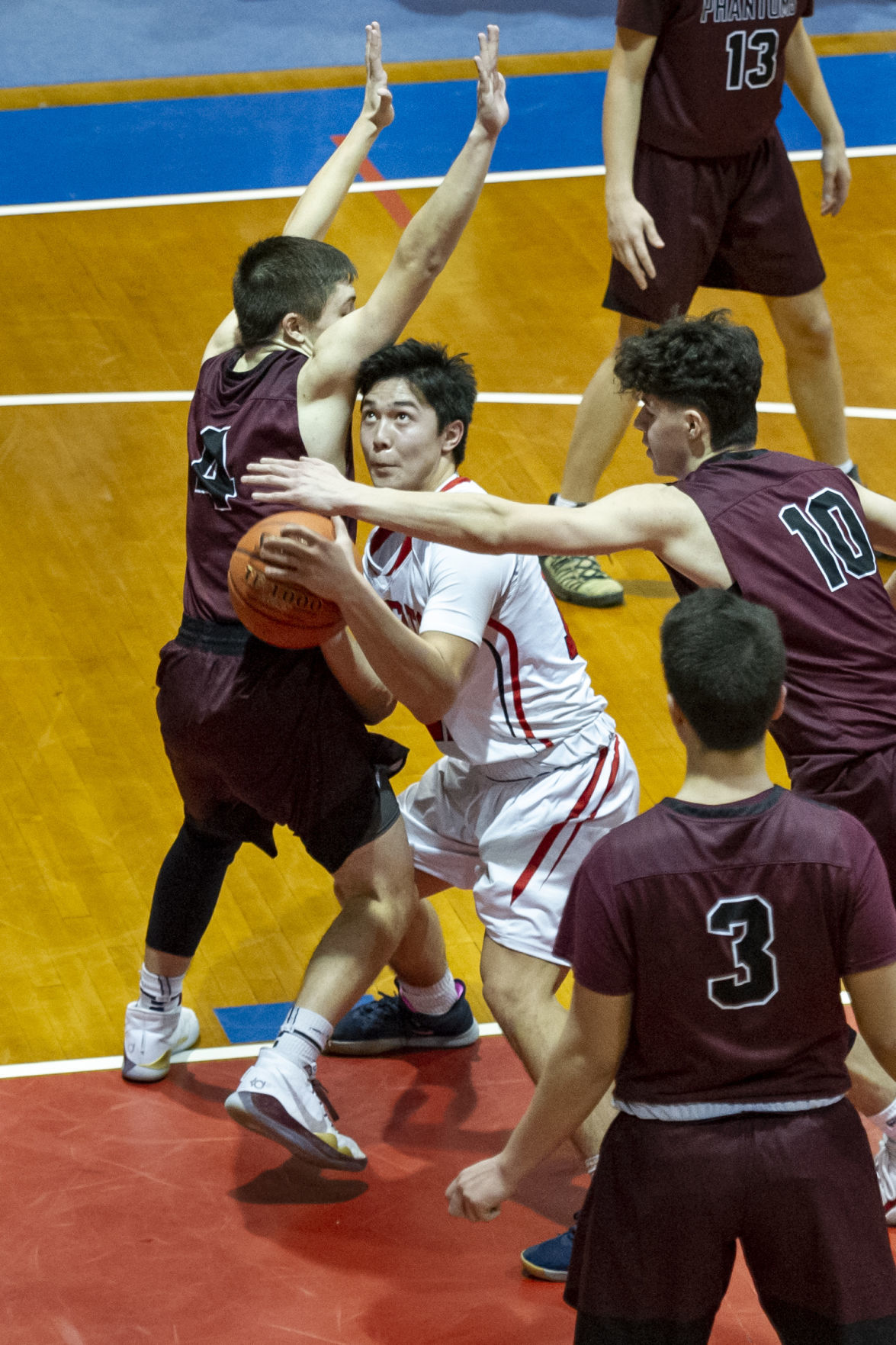 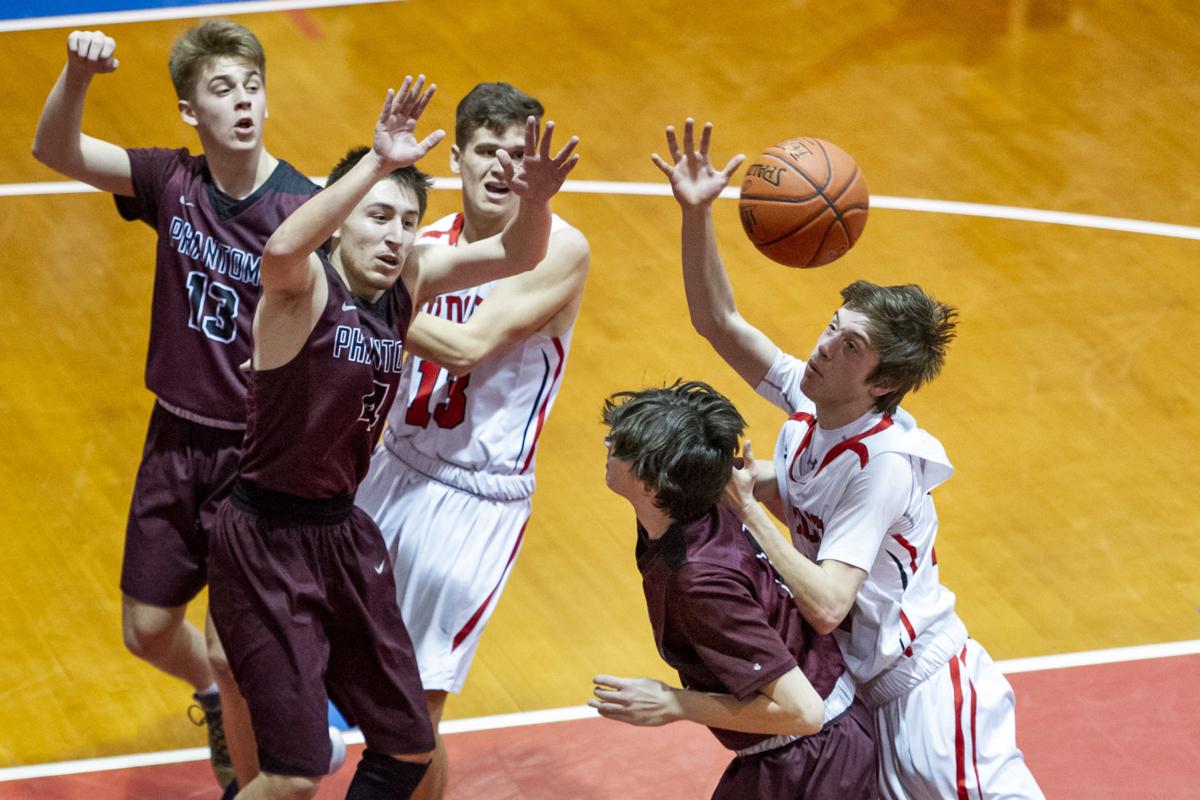 Proctor and Twin Valley players vie for a rebound during Saturday’s Division IV boys championship at the Barre Auditorium.

The Proctor boys basketball team poses with the Division IV championship trophy after their 65-50 win against Twin Valley Saturday at Barre Auditorium.

Proctor and Twin Valley players vie for a rebound during Saturday’s Division IV boys championship at the Barre Auditorium.

BARRE — The Proctor boys basketball team stood at the top of the mountain for the 18th time and for the fourth time in the last six years with Saturday’s 65-50 victory over Twin Valley in the Division IV championship boys basketball game at Barre Auditorium.

Proctor senior point guard Joe Valerio was part of the Phantoms’ last state title in 2017, but this one was different.

“A little more was expected of me this time,” Valerio said. “I was a role player in 2017. A lot has changed in four years.”

Twin Valley coach Chris Brown had said that the early minutes of the game would be extremely important, noting that Proctor won the last regular-season meeting with Proctor “in the first three minutes.”

It happened again. The Phantoms got out to a 14-4 lead. The score wasn’t the only concern for the Wildcats in the opening minutes. Big man Dylan Dupuis was saddled with his second foul before the first quarter was over.

Dupuis logged a lot of time on the bench and eventually fouled out.

The Wildcats fought back. Colin McHale connected on a 3-point field goal that brought TV to within a point, 22-21 at the half.

Despite the narrow margin, Proctor coach Jake Eaton felt good about the situation in the locker room.

“It was the exact same speech as it was at halftime against Rivendell (in the semifinals),” Eaton said. “We were playing well, just not making our shots. I felt like we were in a good spot.”

Just as they did in the third quarter against Rivendell, the Phantoms came out and won the period decisively to take a 39-30 lead into the final quarter.

Conner McKearin started the third quarter spree by stealing the ball and driving the length of the floor for a layup.

Solomon Parker then rang up eight straight points on his own and McKearin notched two quick hoops at the end of the quarter.

“McKearin had some back breakers,” Brown said. “He is very skilled.”

Starling led the Phantoms in scoring with 18, drilling three treys. McKearin followed with 15. Parker had 13 and Crossmon 11.

“Basketball is about what team makes the most plays,” Brown said by the door of TV’s locker room after the game. “They made some big plays in the third quarter, and from there we had to play catch-up.”

There was no catching the Phantoms. They put a stranglehold on the game early in the fourth quarter. McKearin scored off the dribble and Starling nailed a 3-pointer for the first five points of the final stanza, extending the lead to 44-30 and the Phantoms were on their way.

Brown felt Proctor’s basketball IQ was a main ingredient in the outcome.

“Jake does a great job with them. Nine out of 10 times, they make the right basketball play,” Brown said.

Like Valerio, Parker was a member of he 2017 state title team but played sparingly. His brother Joe Parker was on that team.

“Joe got one and I wanted one for myself,” Parker said.

The Wildcats and Phantoms split their games during the season, and Valerio said this one was like the other two in terms of intensity.

“Both teams played wicked hard. Twin Valley really scraps. Chris Brown is a great coach and he had them prepared,” Valerio said.

Despite the 90 miles between the schools, the programs have developed a rivalry.

“I think because Jake and Chris Brown are such good friends, it has become a natural rivalry,” Valerio said. “But there is no bad blood between us.”

It could not have been a better finish for seniors Parker, Valerio and Starling.

“Senior year, I wanted to go out with a bang,” Starling said.

“We had to match their toughness and I think we did that for the most part,” Eaton said.

Brown said his team showed that toughness all 40 minutes, doing as much as they could do.

“We emptied the tank,” he said.

“We try to get off to fast starts, both at the beginning of the game and in the second half,” Valerio said.

It was a formula that worked to perfection again.

Eaton felt the group that made it to the Auditorium — Danville, Rivndell, Twin Valley and Proctor — was a strong one.

“Any of the teams at The Aud could have won this thing. It was a hard year in Division IV. These guys earned it,” Eaton said.

NOTES: This was the 18th straight win for the Phantoms, who had not lost since Jan. 11 when they fell to Danville. The Proctor girls basketball team has also made it to the Barre Auditorium and played their semifinal game on Wednesday against Blue Mountain.