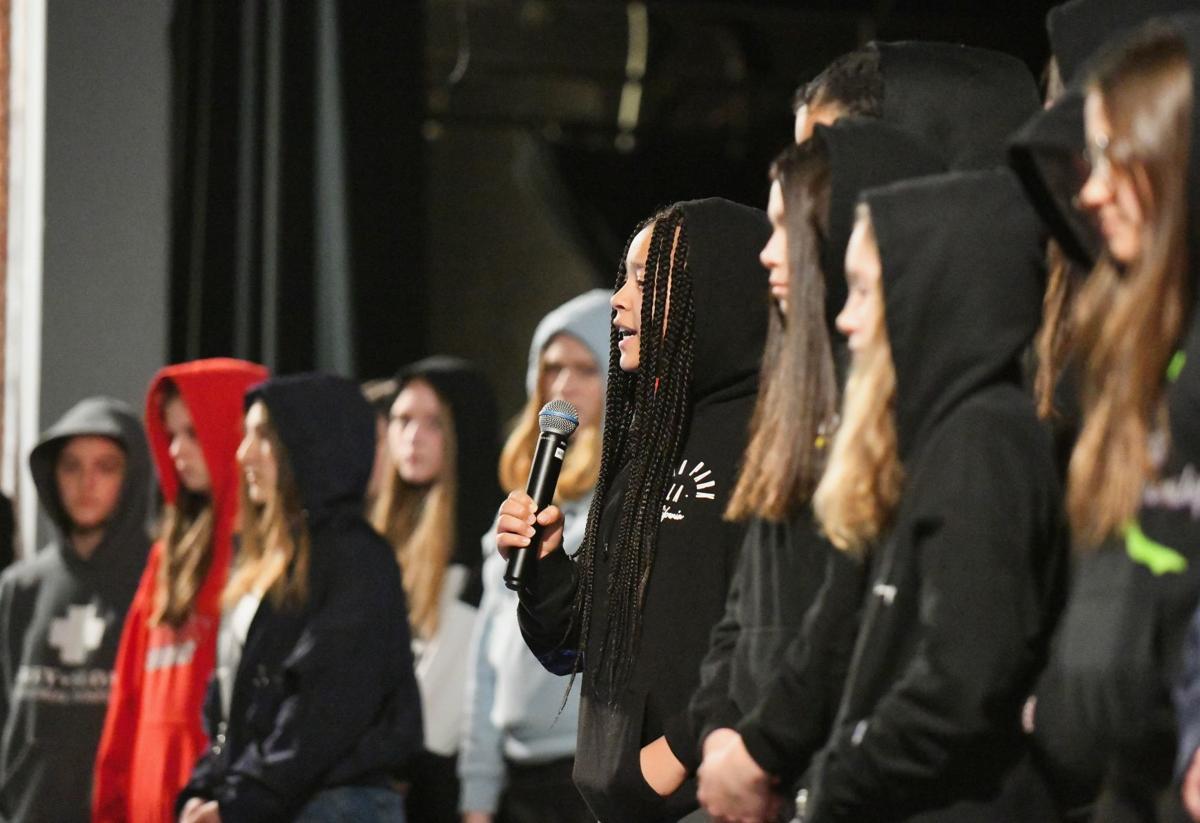 Amaya Tonda, center, performs “Rise Up” with the 7th-grade chorus during “’Lift Every Voice and Sing,’ A Celebration of Black History” on Friday at Rutland Middle School. 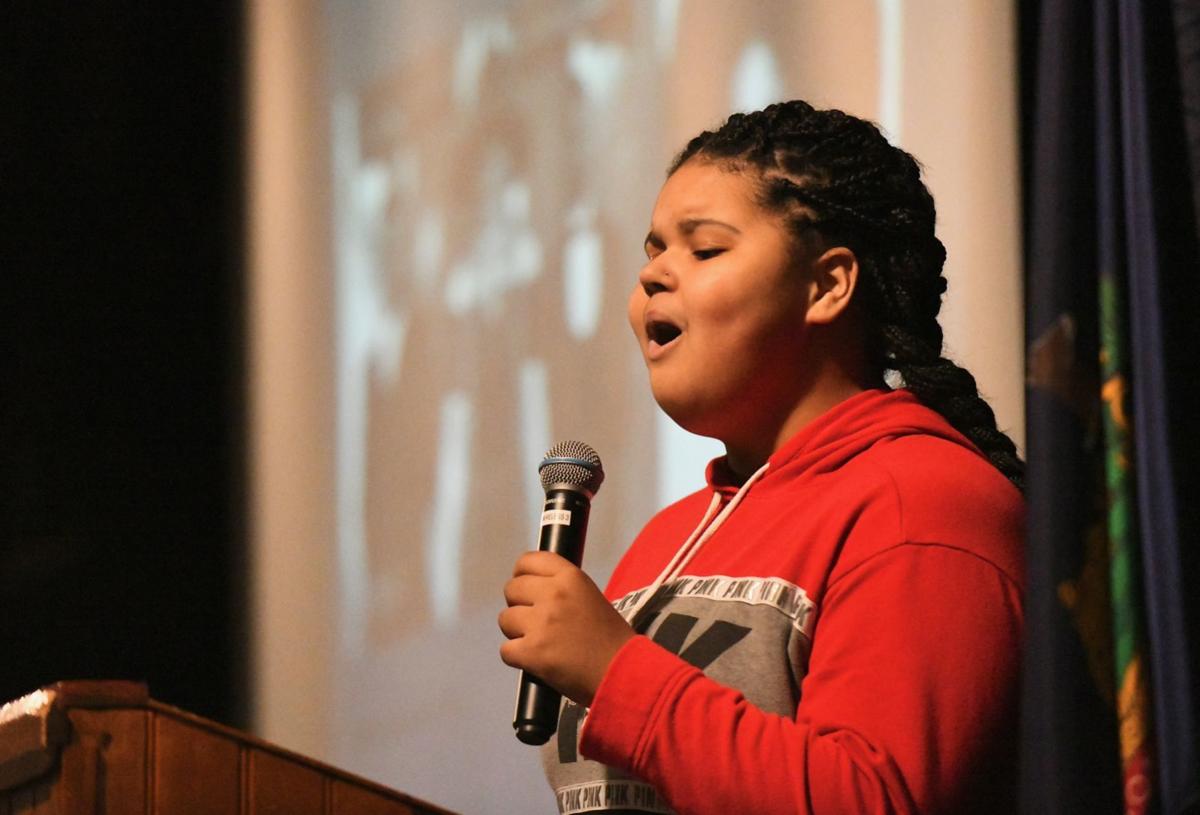 Teanah Webster perfroms “Listen” during,”’Lift Every Voice and Sing,’” A Celebration of Black History” on Friday at Rutland Middle School.

Amaya Tonda, center, performs “Rise Up” with the 7th-grade chorus during “’Lift Every Voice and Sing,’ A Celebration of Black History” on Friday at Rutland Middle School.

Teanah Webster perfroms “Listen” during,”’Lift Every Voice and Sing,’” A Celebration of Black History” on Friday at Rutland Middle School.

RMS Principal Patricia Beaumont welcomed students saying, “Today we celebrate our history and black history, which are one and the same.”

The theme of the celebration, “Lift Every Voice and Sing,” was inspired by the song of the same name — often referred to as the black national anthem. It was sung by the seventh-grade chorus to open the program.

Music teacher Allie Griffiths organized the event with students. Griffiths, who has a gospel music background, said the mix of music, singing and speaking is reminiscent of a church service.

The stage was adorned with framed prints of artwork by African-American artists, curated by art teacher Sally Timmons.

Seventh-grader Phoenix Valle-Downes performed the Langston Hughes poem “I, Too” as a rap to beats made by classmate Jordan Watson.

In an interview after the performance, Valle-Downes said he likes the poem because it talks about “how this world actually is.”

“It’s not just butterflies and rainbows,” he said. “It’s showing not everybody ... has got equal rights.”

To underscore that reality, Valle-Downes added the lyrics, “the racism needs to stop” and “it’s getting old.”

Watson said they spent seven hours working on the song.

“We wanted people to feel what we feel every day,” he said, referring to his daily experiences with racism.

“I’m starting to get tired of it,” said Valle-Downes. “There’s stuff that happened years ago, and people are still doing it. It’s messed up to think that I’m a kid talking about this.”

Griffiths then led students in a moment of remembrance. Students wearing hooded sweatshirts then raised their hoods in memory of Trayvon Martin, the African-American teenager who was shot and killed in Florida eight years ago this week.

“We put our hoods up for him and for all those who fight for injustice,” Griffiths said.

The chorus then returned to the stage with their hoods still up to sing a final song, “Rise Up” by Andra Day, which featured solos by Amaya Tonda and Georgia Gaines.

In an interview Thursday, Griffiths said the celebration — which was organized by and prominently featured students of color — was in response to a controversial social studies lesson that drew criticism from students and parents earlier this month. The lesson asked students to simulate Colonial trade by exchanging cards representing various Colonial-era commodities, including slaves.

She said it’s “unfortunate” that it took such a situation to precipitate this event, but she said she is hopeful it will generate a positive conversation among students and teachers.

Griffiths said she hopes her fellow teachers were engaged in the celebration.

“I hope that they take away that this is a serious topic that has a lot of meaning to the kids regardless of their color,” she said.

“This type of education, this type of self-reflection, has to be done from an honest place,” she said, explaining that people need to be intentional and earnest if they want to really transform.

Griffiths said she had conversations with colleagues this week who expressed reservations about the moment of remembrance, calling it “political.”

She said she was “surprised” how little some of them knew about Martin and the circumstances of his death.

“Whether your kids are diverse or not, it doesn’t really matter,” she said, explaining that sending kids out into the world without talking about race and culture in a historical context is a “doing them a huge disservice.”

A native of upstate New York, Griffiths said she grew up in a predominantly white community not unlike Rutland.

“I was just kind of saturated with that,” she said. “So I really empathize with the white kids — where they’re at right now. I was taught the same way.”

Griffiths attended college in New Jersey, where she worked at a charter school in Trenton before taking a job at Rutland Middle School three years ago. She said that period of her life massively shifted her perspective.

“I was like, ‘Whoa, there’s a huge world that I’m really not aware of.’ I learned to shut up and listen and just soak it all in.”

Now in Rutland, she said she has been speaking up for students of color whenever she can.

“Relying on black students to teach their peers and their teachers is so irresponsible and wrong,” Griffiths said. “And that’s kind of where we’re at right now.”