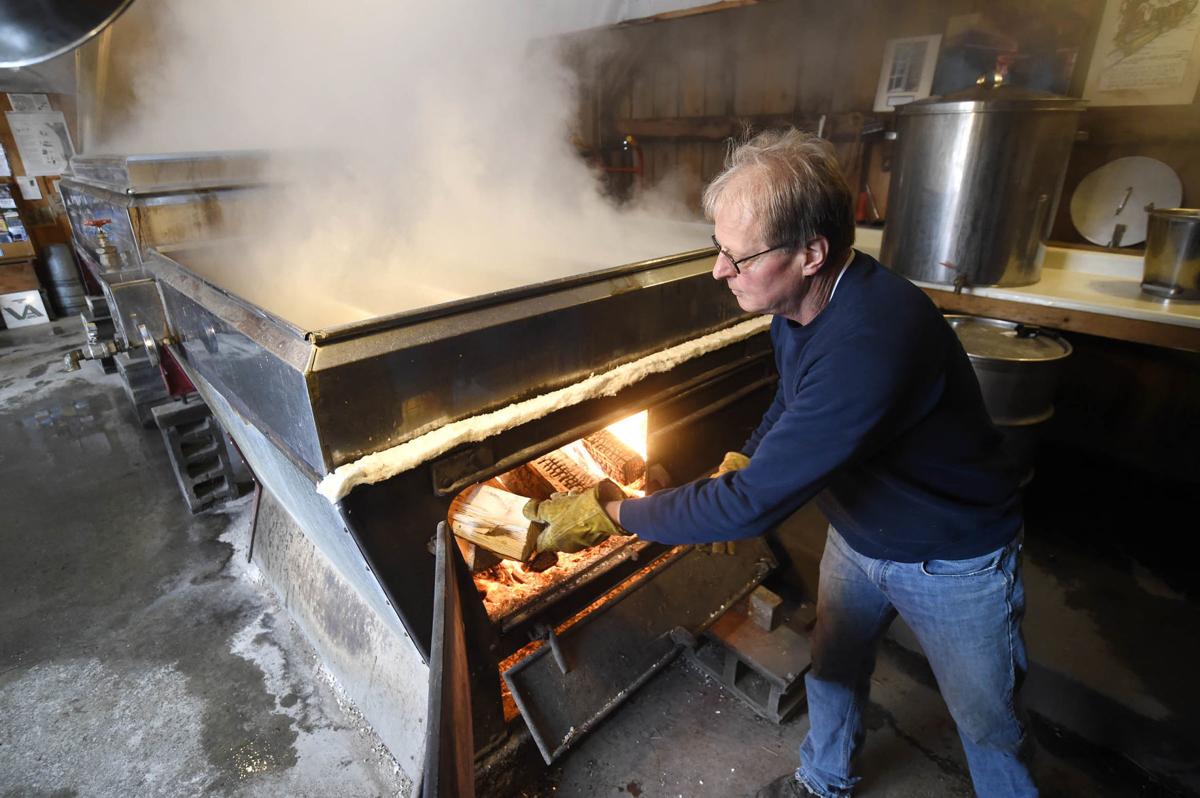 Doug Bragg feeds his evaporator Friday at the Bragg Farm Maple Sugarhouse in East Montpelier as he boils after several very productive sap runs in past days. 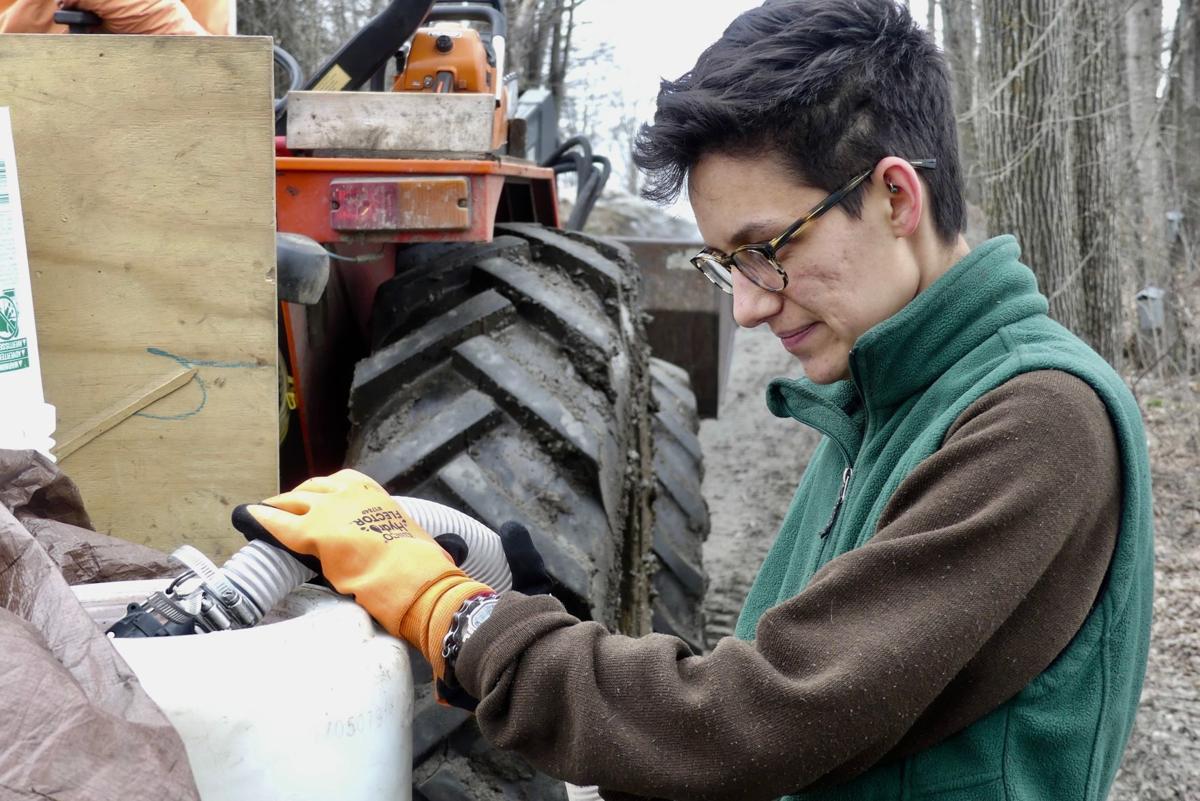 Doug Bragg feeds his evaporator Friday at the Bragg Farm Maple Sugarhouse in East Montpelier as he boils after several very productive sap runs in past days.

As the coronavirus pandemic rumbles into its third week, it appears that no business, not even Vermont’s quintessential maple industry, can hide from COVID-19. The annual Maple Open House Weekend, where sugarhouses throughout the state are open to the public, and the Lunenberg Maple Festival, both scheduled for this weekend, have been cancelled as has the annual Maple Fest scheduled for April 24-26 in St. Albans.

“There’s nobody here, usually this room is full,” Doug Bragg, co-owner with his wife, Barbara, of the Bragg Farm in East Montpelier, said Thursday from his boiling room. “It’s the right thing to do, and we’ll get through this,” he said. The Bragg Farm gift shop and store is open.

“We will be boiling most of this coming weekend of course as the maple trees are not in quarantine and continue to share their super-sweet sap with us,” he said. “However, we are asking for folks who typically would come out to visit us to stay home.”

Usually 100 people or more attend his open house and many buy syrup. “We’ll just have to figure out new ways to sell our syrup,” he said. He has a website and mails syrup to customers.

The coronavirus can stop events and empty gift shops but it can’t stop the sap from flowing. “From our perspective here in Underhill, the season is going well, considerably earlier than last year. We’re at about 65% of our minimum target crop and at 53% of our long-term average crop,” said Timothy Perkins, research professor and director of the University of Vermont Proctor Maple Research Center.

Mark Turco, owner of Papa John’s Sugar Shack in Healdville, said the sap flow this year has been good and his production should be on par with last year. “We’ve produced over half of our crop and by the weekend we should be at 75%,” he said. Papa Johns produces around 5,000 gallons a year.

The same results for Mahar and Bragg. “If we get 10 more days, and it looks like we will, we should be even with last year,” Mahar said. His farm produces 1,000 gallons.

“It’s been a good season so far. The sugar content has been a bit lower than usual, but I should produce about the same amount as last year,” Bragg said. The lower the sugar level, the more sap it takes to produce a gallon. The sugar level this year at his farm is 1.5% down from his usual 2% or higher. “The syrup is a bit darker, not as much gold, but the flavor is excellent,” he said.

With 2.07 million gallons of syrup produced last year, Vermont is by far the biggest producer of maple syrup in the United States. New York State is second at 820,000 gallons. The Vermont total is only a small fraction of the total produced in Canada. More than 71% (12.2 million gallons) of the world’s supply comes from the Federation of Quebec Maple Syrup Producers. The federation, which represents several thousand Canadian maple farms, is a government sanctioned entity that markets and promotes Quebec maple syrup and sets the price per-gallon by holding syrup in storage when the price is low and releasing it when the price is higher.

Despite its dominance in the market, there is a plus side to Vermont from the Federation, according to Mark Isselhardt, a maple specialist for the UVM Extension Service. According to Isselhardt, the federation has stabilize prices in an industry where supply is very unpredictable. Good weather or bad, strong sap flow or poor, the price does not vary much from year to year. Isselhardt believes Vermont producers have benefited from the federation’s activity since anyone outside the province is not subject to the quota system that limits supply. The major downside for Vermont producers, he said, has more to do with the exchange rate with Canada. The Federation sets the price in Canadian dollars. When the exchange rate is near even then the price paid for bulk syrup in the U.S. in general is higher.

“When the Canadian dollar is weak relative to the U.S. dollar, as is the case currently, then U.S. bulk producers take a hit given that large packers of maple syrup are not able to charge more for domestic syrup when many of their accounts are with “price clubs” such as Costco, and Sam’s Club,” he said.

A bigger concern than coronavirus for Vermont’s maple sugar producers is climate change. COVID-19 is temporary and eventually will end. Global warming is a long term problem. The maple syrup season usually starts in February and runs to April. Sap flows when the nights are cold and the days are warm. Twenty years ago the average season lasted 45 days. The average season now is 40 days according to Isselhardt.

“It’s complicated,” Isselhardt said. “You don’t lose syrup for ever lost day. There are lots of factors involved.”

The 2.07 million gallons produced last year is more than twice to total produced in 2009 when Vermont produced 920,000 gallons and nearly six times the 370,000 gallons that were produced in 1999. The higher total is due to bigger farms and more efficient operations.

“Maple sap harvesting is highly sensitive to temperature changes of only a few degrees as well as unusual temperature volatility. The relatively narrow weather conditions that stimulate sap flow, air temperatures that fluctuate somewhat above and below freezing, have the potential for significant disruption with climate change. Observations collected over the recent past indicate that the ideal period for sap collection is shifting earlier in the calendar year. The use of vacuum-tubing systems is considered the best currently available technology to effectively mitigate this change. Fortunately, this is the same technology producers employ to boost production. As a result, the average annual yields of sap have been increasing over the last 20 years as more and more producers deploy the technology. While this is potentially good news, vacuum tubing systems are not effective at mitigating the threats posed by the risk of more volatile temperature swings. Employing additional specific adaptations to maintain sap yield in the face of a changing climate is of great interest to many maple producers,” said Allison Hope, executive director for the Vermont Sugar Makers’ Association.

According to the Proctor Research Center, one in four trees in Vermont is a maple.

The economic impact of maple in Vermont is more than $400 million annually with $25 million in direct sales.