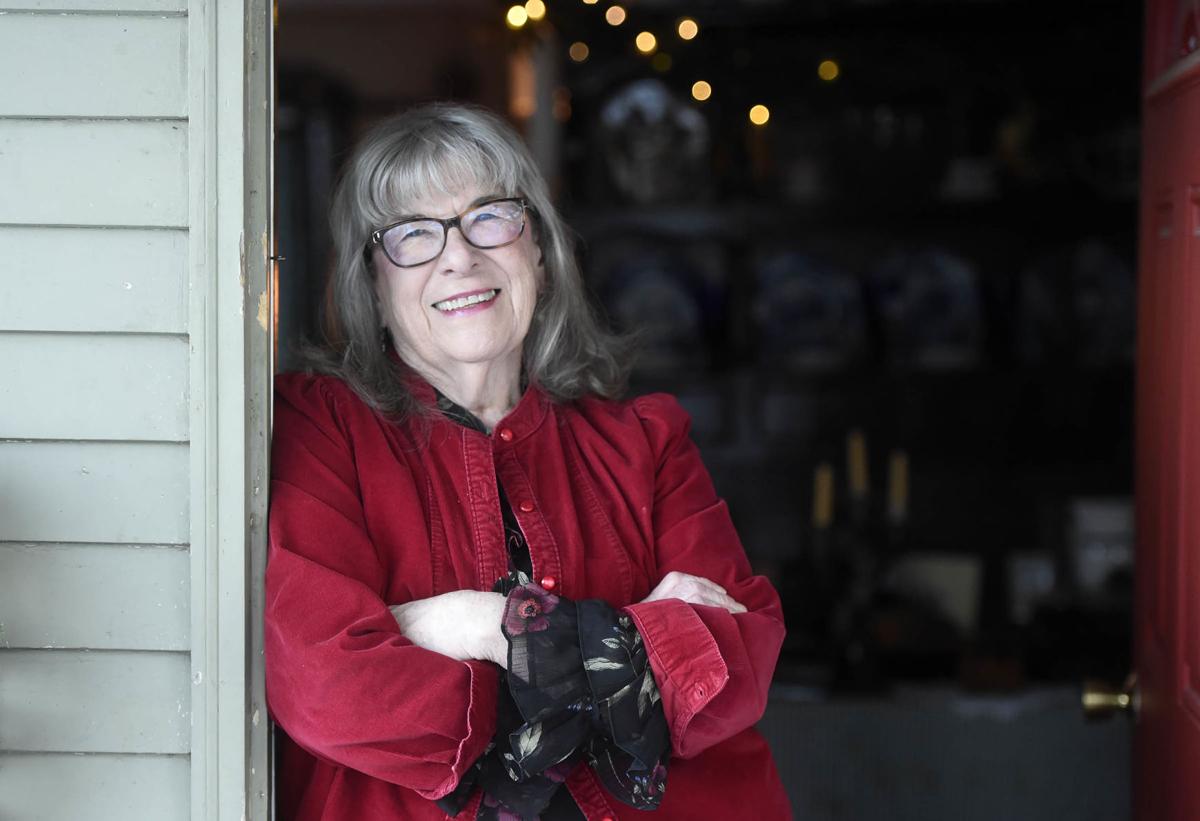 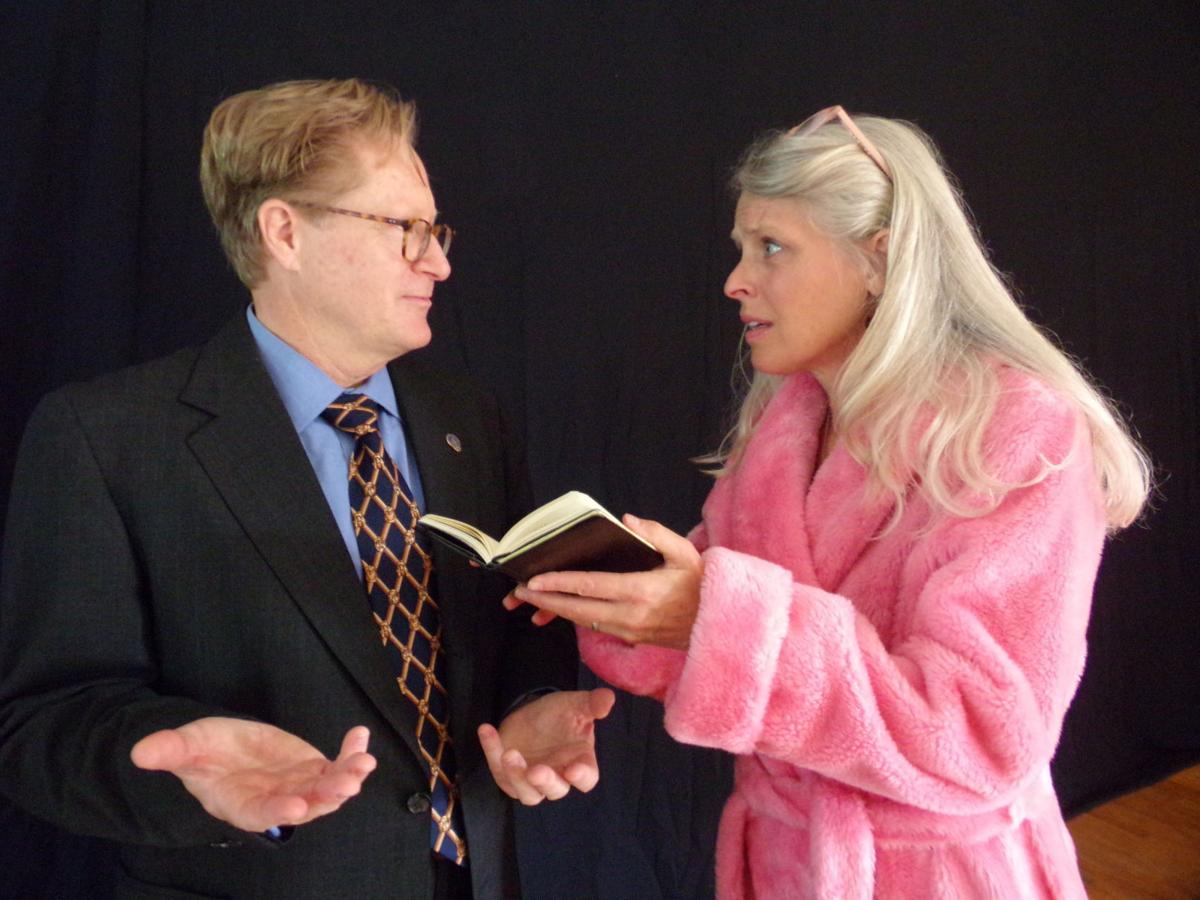 The late Jeffrey Tolbert and Monica Callan in Jeanne Beckwith’s “Nothing Stays” at the 2017 Burlington Fringe Festival. 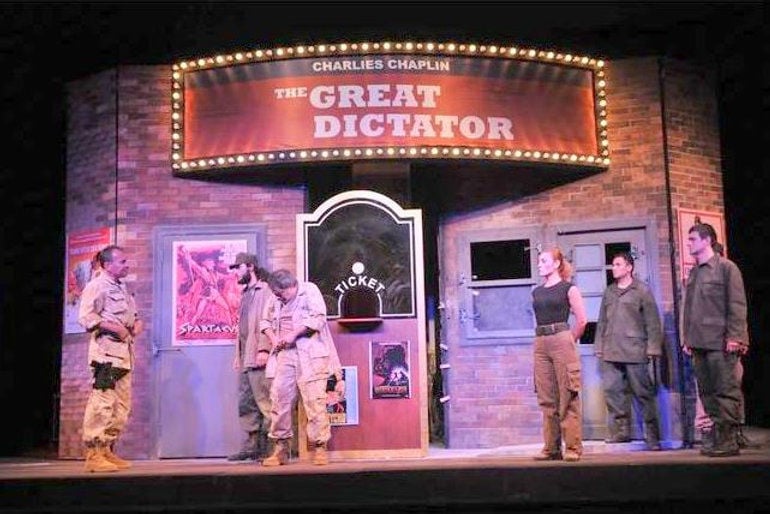 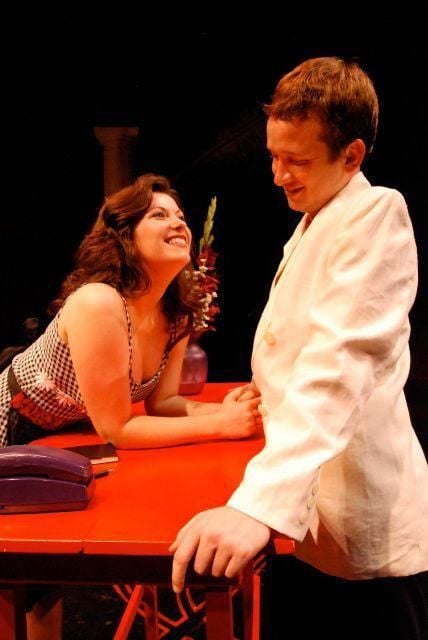 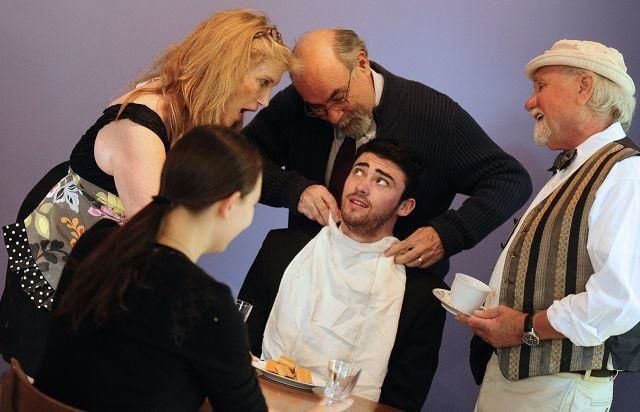 Moxie Productions’ 2012 production of “Opportunity of a Lifetime” for the Vermont Contemporary Playwrights Forum. 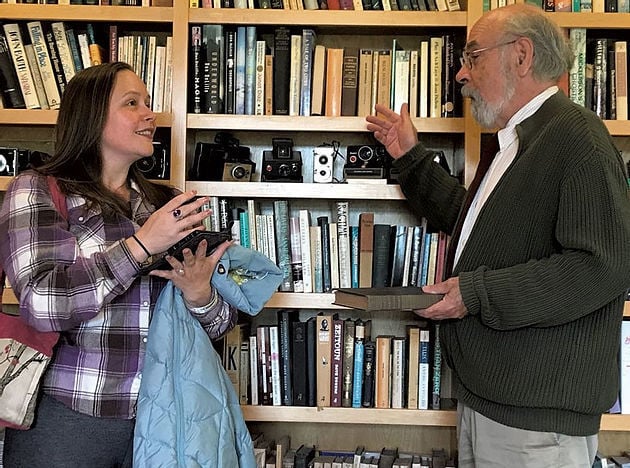 Moxie Productions’ 2019 “William Hazlitt and the Natural Correction,” by Jeanne Beckwith, presented at the Stranger Play Festival at the Off-Center in Burlington, and at the Grange Hall Cultural Center in Waterbury Center. 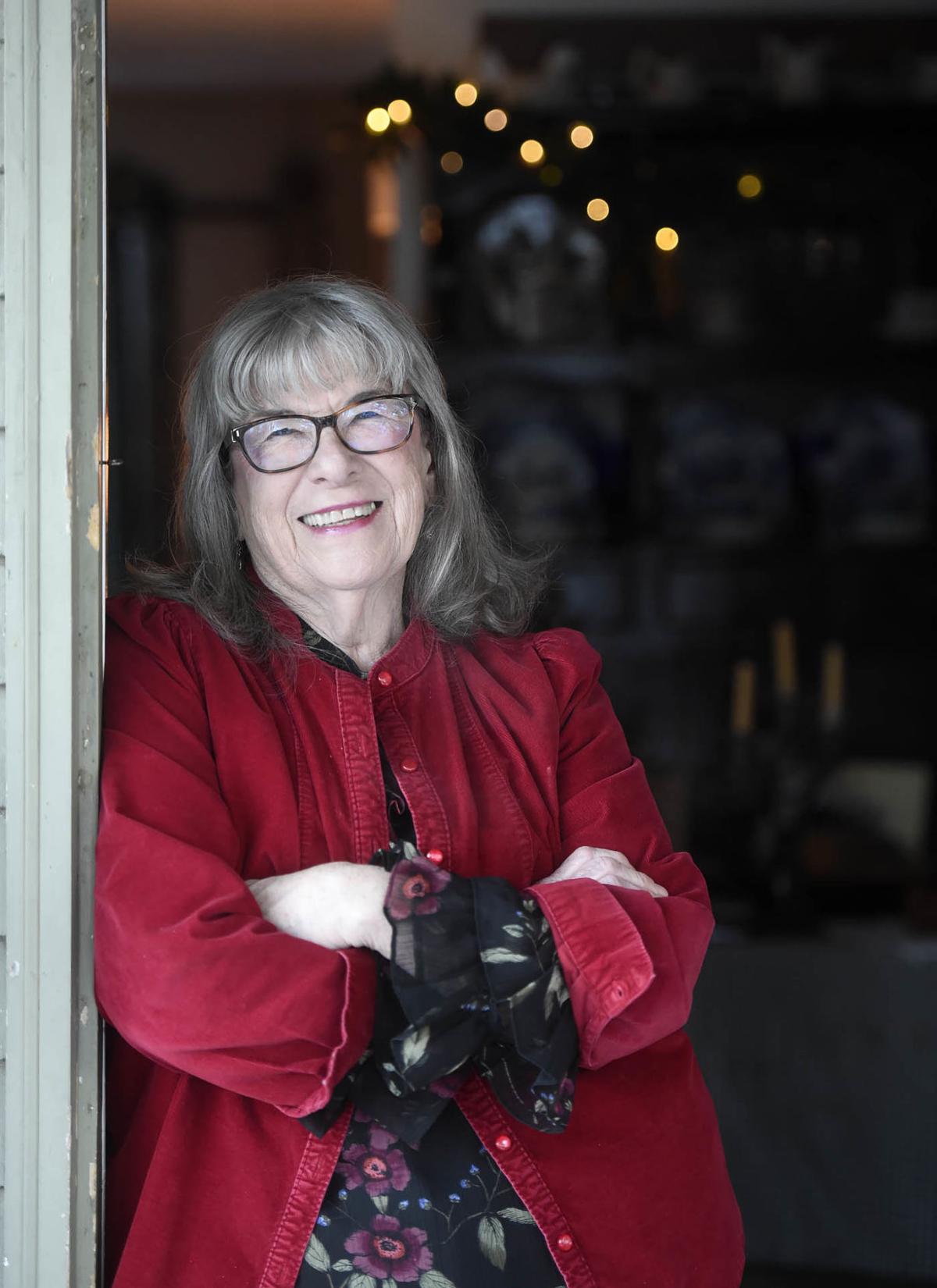 Playwright Jeanne Beckwith at her Roxbury home. The Valley Players will present her “A Life Altering Event,” live-streamed Thursday-Saturday Jan. 21-23.

The late Jeffrey Tolbert and Monica Callan in Jeanne Beckwith’s “Nothing Stays” at the 2017 Burlington Fringe Festival.

Moxie Productions’ 2012 production of “Opportunity of a Lifetime” for the Vermont Contemporary Playwrights Forum.

Moxie Productions’ 2019 “William Hazlitt and the Natural Correction,” by Jeanne Beckwith, presented at the Stranger Play Festival at the Off-Center in Burlington, and at the Grange Hall Cultural Center in Waterbury Center.

Playwright Jeanne Beckwith at her Roxbury home. The Valley Players will present her “A Life Altering Event,” live-streamed Thursday-Saturday Jan. 21-23.

Roxbury playwright Jeanne Beckwith has been a Vermont playwright for nearly two decades.

“Jeanne is one of the most grounded and accessible performing artists I know, generously sharing her time, talents and creative energies with many local groups like the Vermont Playwrights Circle, the Valley Players, Moxie Productions and Unadilla Theatre, just to name a few,” said Kim Bent, Lost Nation’s founding artistic director.

“The central Vermont performing artists community is immensely richer in so many ways thanks to Jeanne’s participation, and we are incredibly lucky that she’s here.”

Waitsfield’s Valley Players will present Beckwith’s “A Life Altering Event” Jan. 21-23 live via Zoom. The Players are celebrating their 40th anniversary as the Mad River Valley’s community theater. (Beckwith also won the 2017 Valley Players Playwright Award for her “The End of the World as We Know It.”)

“There is something very nurturing and communal about community theater groups,” Beckwith said. “I’ve been in academic theater, I’ve worked in professional theater. All of it has its own joy.”

And she’s not entirely unhappy with the limitations of Zoom, although the play was written for the stage.

“We can talk about all the drawbacks of the Zoom performances of a play that was born to be on the stage,” Beckwith said. “On the other hand, this whole Zoom thing is wild because they cast people from Texas, Virginia, New York, New Hampshire, and they’re all getting together for the rehearsals. I’m looking forward to seeing what they can do with it.”

Beckwith’s work has not only been with amateur and professional theaters in Vermont. Her first big success was the dark comedy “War Story at the Rialto” (“The 900 Years War” in the revised edition), which was premiered by the State Theater of Turkey.

“It was translated into Turkish,” Beckwith said. “That’s the one I’ve made the most money off of. It put a roof on my house.”

The comedy-thriller “Opportunity of a Lifetime,” premiered in Vermont by Monica Callan’s Moxie Productions, had productions in California and New York City. She made a little money off that, too.

“I had a show of mine done by the Hypothetical Theatre Company of New York City,” Beckwith said. “It was the first time I’d had a show of mine done in New York. I was of course both just terrified and proud. I came to see it when it was opening, and I got to talk with the actors. One of the actors said, ‘It’s so important she takes her shoes off in moments of crisis’ — she’s always barefoot.

“And I thought, ‘She is?’” Beckwith said with a laugh. “I covered pretty well.”

In college, Beckwith had no intention to become a playwright. She wanted to write stories and, in fact, earned her master’s degree at Indiana University in creative writing.

“I was pretty young at the time, and I wrote my first real novel,” she said. “I actually got an agent. McIntosh and Otis picked me up. They were very, very appreciative. And this will tell you something about me.”

Beckwith finished the novel and sent it off to her agents. They sent back a letter with a list of things she needed to work on in the novel.

“A long letter,” Beckwith said. “I know today, with the wisdom of old age, they liked the novel, and it would’ve gotten published probably if I just had been not an (idiot).

“But, I just thought, oh, they hate me, they hated it, and I went off the rails for a while, I really did. I just frittered my life away for a while,” she said.

Beckwith had always loved the theater and had acted in high school and college.

“I had to work in college, so I couldn’t be a theater major, so I was always back and forth,” she said. “And I had taken a playwriting course with Sam Smiley, who wrote a good playwriting textbook. So I loved writing plays and had had short plays done.”

Beckwith finally dared show her novel to somebody else.

“They liked it and said that sometimes ‘It feels like you’ve got these people speaking and it sounds like stage directions. Why don’t you turn it into a play?’” she said.

Beckwith did and sent it to the Bloomington Playwrights Project, which she had recently become involved with.

“They did it, and I ended up getting an Indiana Humanities Grant,” she said. “I thought, well, I had just been barking up the wrong tree all along.”

Beckwith earned her doctorate in dramatic criticism from the University of Georgia in 1994. Her dissertation, “Deviancy on the Stage,” critically examined the works of David Mamet and Peter Barnes. She and her husband, F. Brett Cox, teach at Norwich University in Northfield.

In addition to having a book of her short plays published, 15 of her full-length plays have been produced, among other works.

“I’ve had a few things done in New York, but never anyplace that was going to get a real review of it,” she said. “I’ve had a couple of reviews, but I’ve learned the hard way through the years that (it depends upon) where you are and where you came from. I can whine about women not having been given the same chance, but I don’t think that’s just it. I do think it’s luck of the draw.

“I’ve been in the right place at the right time so that I’ve had minor success,” Beckwith said.

And it’s not about fame.

“Ask someone to name living playwrights, they might come up with David Mamet or Neil Simon, but there aren’t that many who have gotten anywhere with their work,” Beckwith said. “On the other hand, do you know how many there are in the Dramatists Guild? Almost 9,000!”

Like many professional playwrights, Beckwith gets two, three, some years five plays produced during the year. Other years, it’s nothing.

“I keep sending stuff out because why not? If I send enough out, somebody somewhere might want it,” she said.

As a playwright, Beckwith sees herself primarily as a storyteller.

“It’s my best medium,” she said. “I’m not one of the playwrights that knows exactly how it’s going to end. Mostly I am character-focused, and I love the quirky. People have called me quirky and I’ve accepted it — they’re right. I’m a quirky character-centered storyteller.”

Lost Nation Theater produced Beckwith’s satirical romantic comedy “Love Letters Made Easy” as part of its 2010 main stage season. The script was inspired by an Edwardian guide to the proper way to express oneself to one’s beloved.

“Jeanne simply applied her mischievous genius to the idea and brought it up to date in all kinds of hilariously extravagant ways,” Bent said. “‘Love Letters Made Easy’ is actually a good example of her core strength as a playwright.

“She’s amazingly prolific and can apply her inventive talents to a broad range of dramatic situations,” Bent said. “In some plays her goal might be comedy, but in others she’s crafting complex, dimensional human beings struggling to come to terms with each other in intense emotional relationships. So no matter the genre, her work is always compelling, surprising and incisive.”

Beckwith feels she has found a receptive community.

“I’m so proud of Vermont in the theater realm because, yeah, it’s easy to think of its limitations, but on the other hand, you can’t walk 10 yards without running into an actor,” she said.