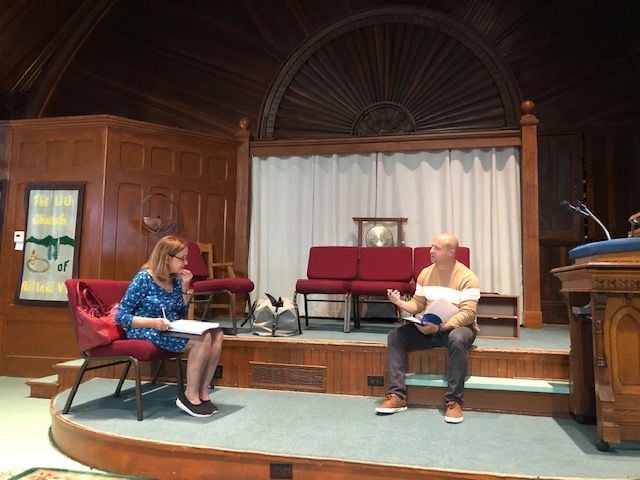 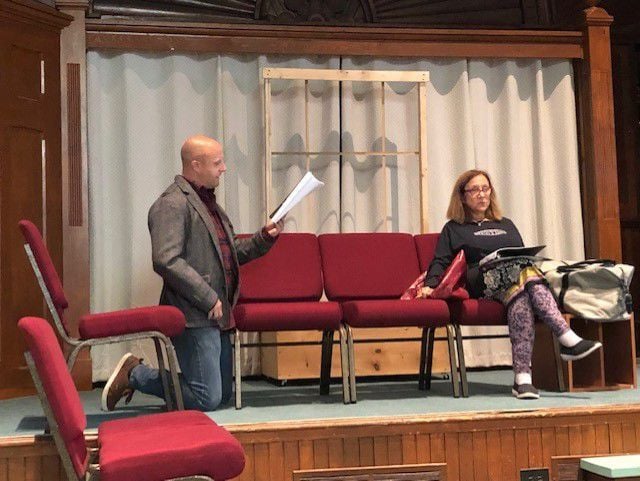 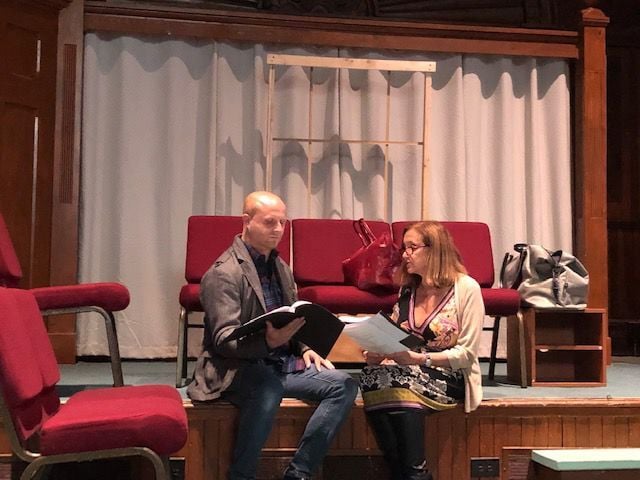 Whether or not you believe in fate, moments of destiny seem to happen to us all. That’s where we meet two soulful strangers with secrets in “The Tangled Skirt.” Playwright Steven Braunstein’s noir crime comedy begins at a dimly lit bus stop in the middle of nowhere, just past midnight when their paths cross.

The “elusive nature of fate” is played out in this new production of “The Tangled Skirt,” presented by Vermont Actors’ Repertory Theatre. The first show of the community theater’s season will be presented in staged readings at 8 p.m. Friday and Saturday, Oct. 15 and 16, and at 3 p.m. Sunday, Oct. 17.

“The thing that I think is cool about this play is it takes place in the course of two hours in a bus station,” Kristen Hixon, who is directing, said. “It’s only a 57-page long script but they get whiplash in their relationship in that hour. It’s really is a game of cat and mouse.”

“And as the play goes on you realize it’s a life and death game actually,” actor Sandra Stillman Gartner, who plays Rhonda opposite Alex Nicosia as Bailey, said.

On Oct. 2, afternoon, Gartner and Nicosia rehearsed the opening scene with Hixon on a simple set on the Unitarian Universalist Church stage.

“It’s a staged reading (but) the actors are not going to be sitting (with their scripts in their faces). There’s a lot of movement,” Hixon, who interpreted the time period to make the set and costumes “a little bit vintage,” said.

As Rhonda and Bailey make small talk at the bus station, we start to learn why their lives have intersected.

“She’s kind of like the black widow. Let’s just say whatever happened, it wasn’t her first time,” Gartner, who described her character as “soft enough that he’s attracted to her, but a killer at heart,” said.

“She’s always used sex and attraction to get the things she wants in the world, and the thing she wants most is money,” Gartner said. “That’s been her M.O. for a long time. She’s been abused by people and she’s learned to harden herself and move on. She accepts what she’s done, and I don’t see a lot of guilt in her.”

“You try to find yourself within the character and what you can identify with,” Gartner said about inhabiting the role. “I don’t find that side of me, that brutality, so it’s something I have to think about a little more. I’m not one of those (actors who think) you have to have the experiences of the character. I get how this character has used (her experiences) to operate within the world.”

“At one point, she doesn’t want to give him the time of day and she’s really guarded, and then they’re kind of flirty. It’s fun,” Hixon said about the dynamic between the two characters.

A romance crime mystery with a bit of a psychological twist, “you don’t know if it’s real or a figment of his imagination,” Hixon said. “Bailey knows something about her that he’s holding over her head, but he’s also in love with her.”

“We explore elements of reality,” Hixon concluded. “What’s real and what’s not. The idea of, is this woman really a person, or is she a part of his storytelling persona? Is he really just at the bus station bored by himself?”

Vermont Actors’ Repertory Theatre presents “The Tangled Skirt,” a comedy-noir by Steven Braunstein, in staged readings at 8 p.m. Friday and Saturday, Oct. 15 and 16, and at 3 p.m. Sunday, Oct. 17 at the Unitarian Universalist Church, 117 West St. in Rutland. Admission is by donation ($10 suggested); for information, go online to www.facebook.com/actorsrepertorytheatervt/ Proof of vaccination and masks are requited for admission.