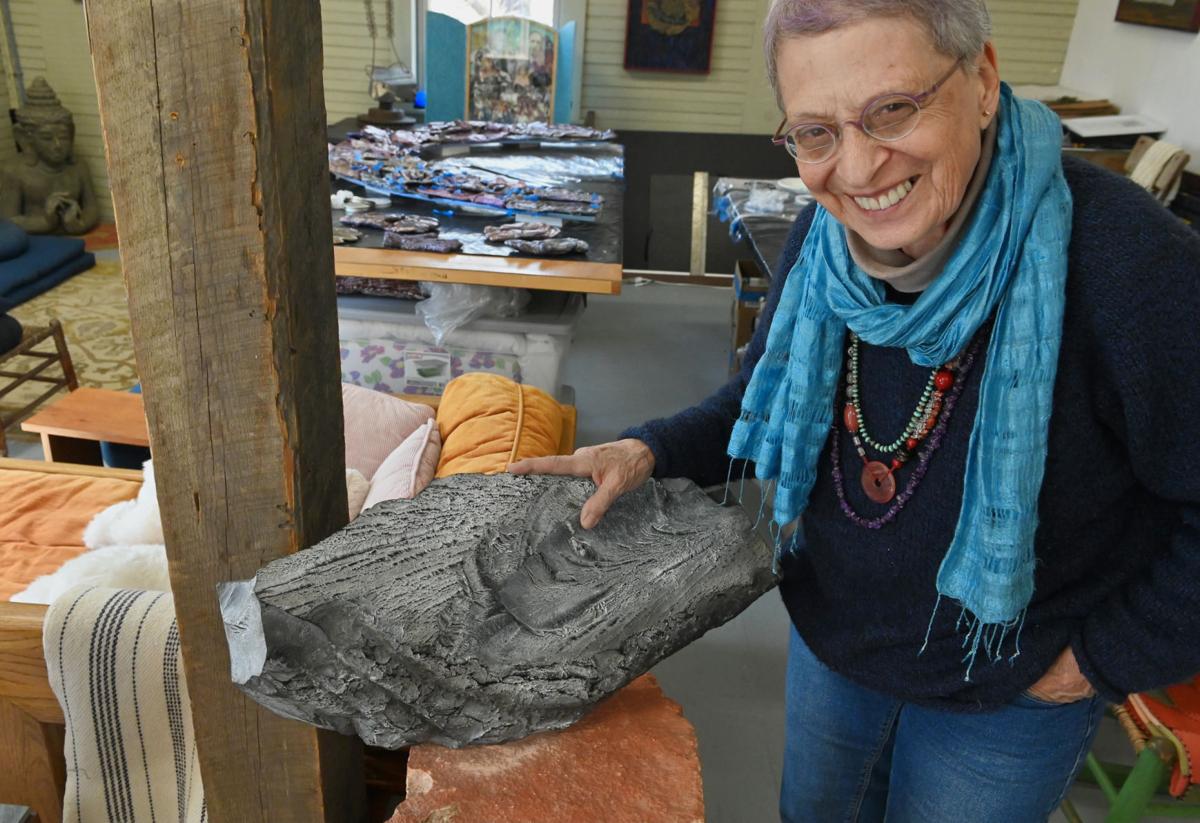 Artist B. Amore poses with her sculpture “Life Cradle” at her Brandon studio. 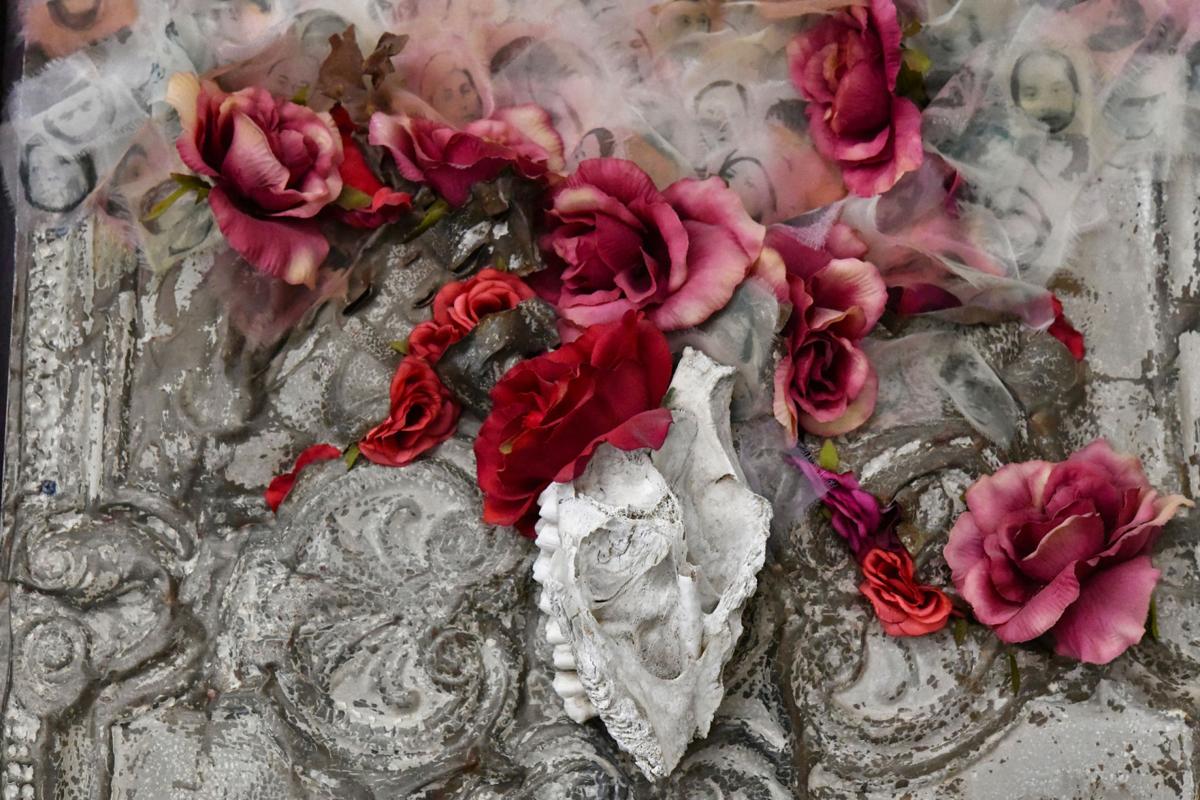 B. Amore: “Heart of the Matter II,” at her Brandon studio. 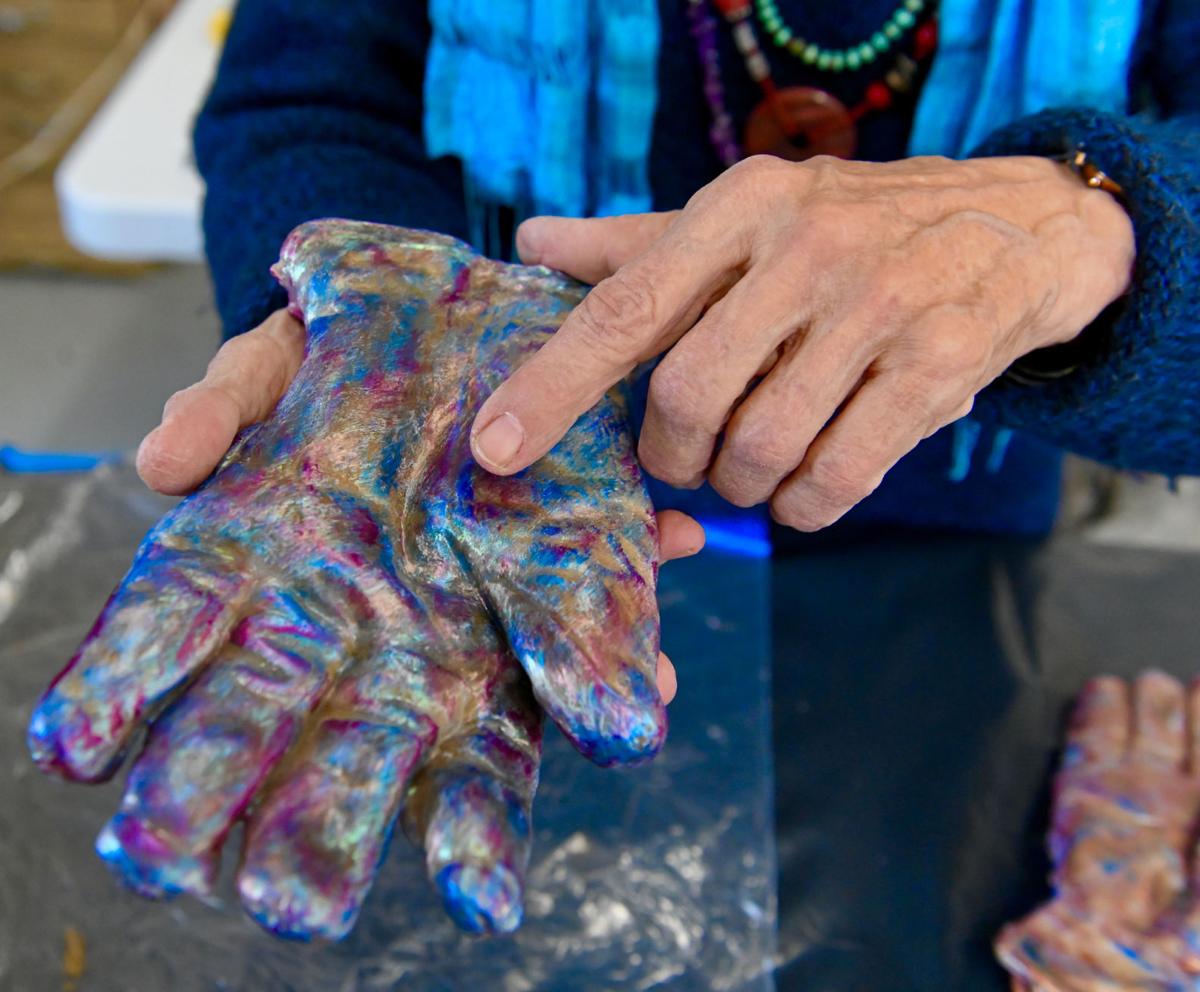 B. Amore shows gloves that are used in her art, including “The Arc of Healing Hands.” She uses found objects, such as gloves, which are treated with an archival resin. 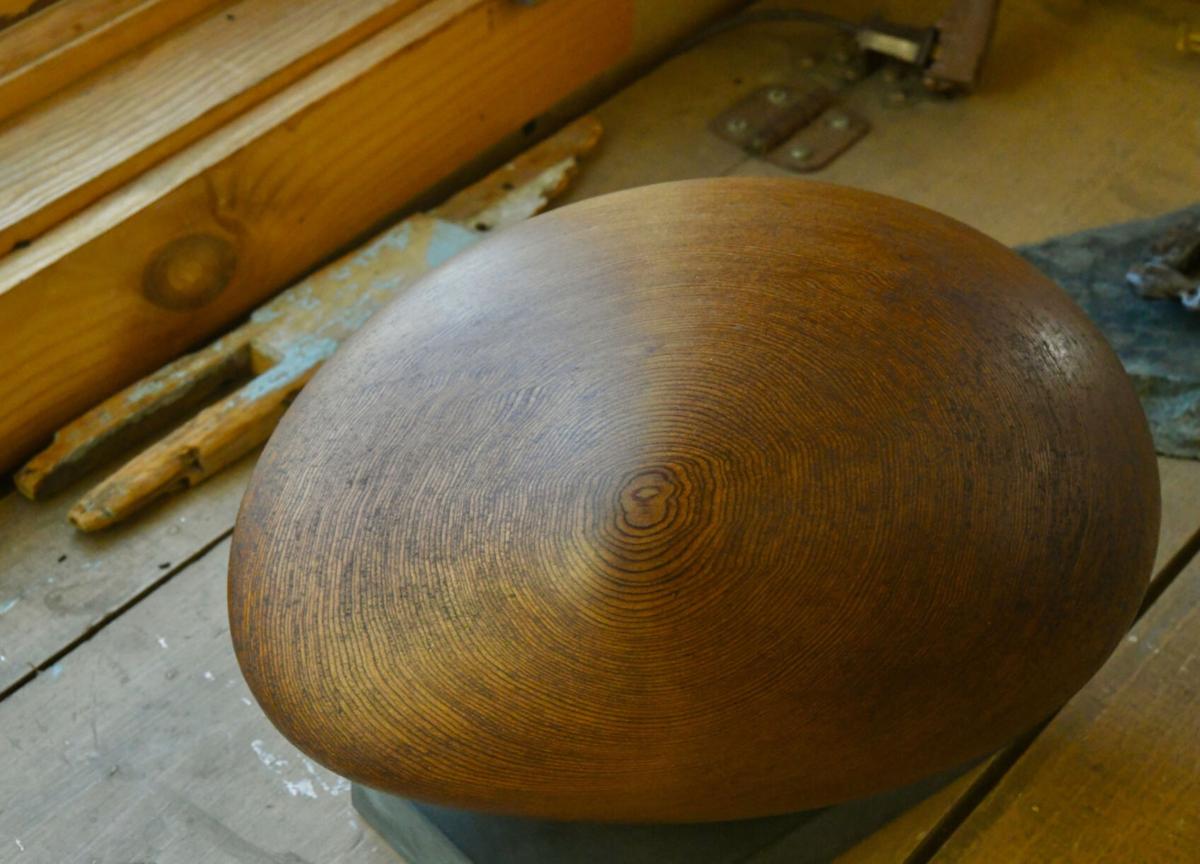 B. Amore’s redwood sculpture “Genesis” is displayed prominently at her home studio in Benson. 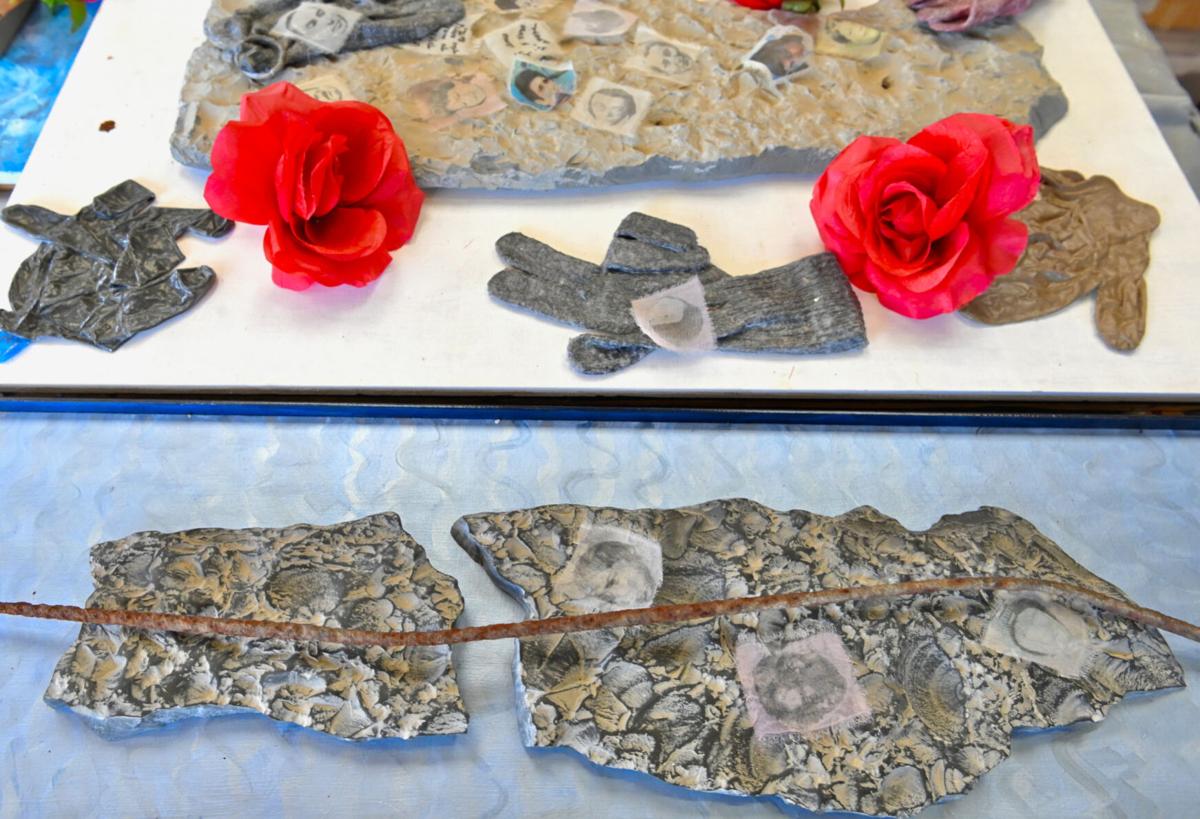 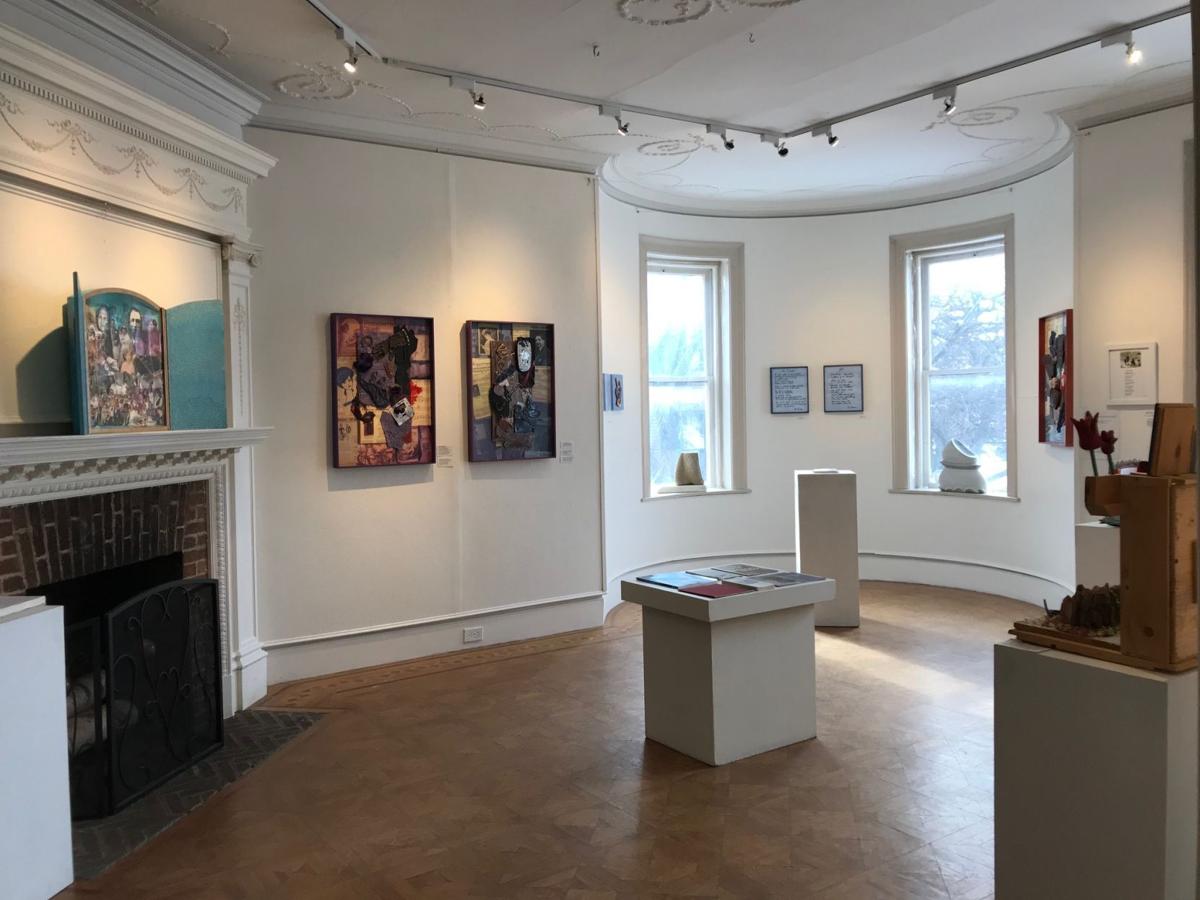 B. Amore’s work on exhibit at the recent exhibit “Pictures and Words” at the Chaffee Art Center in Rutland.

Artist B. Amore poses with her sculpture “Life Cradle” at her Brandon studio.

B. Amore: “Heart of the Matter II,” at her Brandon studio.

B. Amore shows gloves that are used in her art, including “The Arc of Healing Hands.” She uses found objects, such as gloves, which are treated with an archival resin.

B. Amore’s redwood sculpture “Genesis” is displayed prominently at her home studio in Benson.

B. Amore’s work on exhibit at the recent exhibit “Pictures and Words” at the Chaffee Art Center in Rutland.

B. Amore vividly remembers the moment she began making art again nearly five decades ago. She had two children, little money and precious little free time. But she hungered to try carving and had just been given a block of redwood by a sculpture teacher. Sitting on the floor of her Boston apartment, a blanket spread out before her, the wood lay nestled in a cushion.

“I was beginning to carve and I stopped, put my hands on it. Oh my God, this is a place I haven’t touched since I was 5 years old. How can I make it real?” she recalled of that charged feeling.

In her head, Amore heard her grandmother Concettina DeIorio’s voice, “Where there’s a will there’s a way.”

Since that moment with chisel and mallet, B. Amore has had the will.

That exquisite first piece, a smooth ovoid form that she later titled “Genesis” opened the door to Amore’s leap into innovative sculpture — sculpture that was soon in stone, stone and steel, and monumental environmental installations. Her exploration of themes of memory, immigration, and journey and work with photographic and other media led to bodies of artwork including her “Lifeline — filo della vita,” a six room installation at Ellis Island Immigration Museum seen by over 2 million visitors, and “Invisible Odysseys,” dioramas created by Mexican farmworkers in Vermont of their immigration journeys and lives here. Among her recent and new work, she has brought in unexpected found objects, especially discarded gloves.

A dynamic educator, Amore has taught nationally and internationally. In 1987, she founded The Carving Studio and Sculpture Center, acclaimed hub of sculpture and art education programs and artist residencies located in West Rutland.

A writer and poet, Amore’s books include “An Italian American Odyssey” (2006) and new poetry volume, “Journeys on the Wheel.” Amore writes for art magazines and journals and is an arts correspondent for Vermont Arts at the Rutland Herald and Times Argus.

“For me, art is like breathing,” Amore said at her Brandon studio last weekend — a new work “Arc of Healing Hands” laid out on a large table, recent and older works filling the walls and in boxes throughout the airy space.

Born in Boston to a family with Italian roots on both sides, Amore, née Bernadette D’Amore, was drawn to, but not encouraged toward art as a child. Ties to Italy were strong. In her late teens, she traveled there with her mother, and stayed for a year, gaining language fluency. She studied at Boston University and the University of Rome and embarked on a career in social work.

Busy with her work and young family, Amore still wanted to pursue art, specifically carving and sculpture. Sitting in on a sculpture class, she was spellbound. As she carved that very first piece, besides hearing her grandmother’s words, she recalled a childhood memory of her stonemason grandfather cutting granite.

Initially working in wood, Amore wanted to try stone. Directed to the Vermont Marble Company, she drove to Rutland and filled her car with discarded pieces. Incautiously unloading them, she threw out her back and had to wait weeks to get to work.

Constantin Brancusi and Barbara Hepworth were early influences on Amore’s interest in abstract forms. Later, Mark De Suvero’s work influenced her move to work with steel. Soon, Amore was bringing metal and stone together, including in balanced pieces with moving elements.

Awarded a Fulbright grant, Amore studied in Carrara, Italy, where she has returned often.

With growing acclaim and recognition for her work, Amore began teaching including at Boston Museum School and the Art Institute of Boston.

In 1986, when plans to take her sculpture students to Italy were upended by the Chernoble Nuclear Power Plant disaster, Amore scrambled to find an alternative experience. She landed on the Vermont Marble Company in Proctor.

“They gave us a whole building,” Amore recalled.

Students arrived, the session was a success, and in the summer of 1987 Amore launched The Carving Studio and Sculpture Garden.

“I wanted a place like Carrara where people could come to work freely as sculptors and find help to execute, but I also wanted it to be an educational institution,” Amore said.

Amore’s intense love of the medium and deep sense of equality laid the foundation for The Carving Studio, explained Executive Director Carol Driscoll.

“I think she saw art as freedom of expression,” Driscoll said, noting that from the very beginning, the center was non-hierarchical.

“Instructors, participants, students, interns, professional artists — we’re all there together, sharing and discovering what works,” Driscoll said, noting that Amore set that tone.

Amore also forged strong and lasting bonds with the community with school programs, public events, and initiatives including the Rutland Sculpture Trail — which is expected to have new pieces dedicated soon.

When she turned 50, Amore changed her name — shortening her first to B., as her father had called her in childhood, and deleting the D’ of her last, leaving the Italian word for love.

“It was like a reminder to have a loving presence in the world, to ‘be love’ as much as I could,” said Amore.

Along with her abstract sculpture work, in the 1990s Amore brought in photographic processes, printing images on silk and other surfaces. Mixing different media — photographs, stone, text, tin panels — she moved into bodies of work exploring family, immigration, memory, perception of history.

In “Life line — filo della vita” at Ellis Island in 2000-2001, Amore shared visual stories of generations of her family. Ancestor scrolls combined images of her forbears with text. In her “Odyssey” installation, stone stelae on wheeled dollies seemed to roll amidst personal belongings. With love letters, photographs, tools, diary snippets, and myriad material bits of their lives, Amore powerfully told a universal story.

For many years, Amore has used photographs of faces printed on silk in her art. The anonymous mini-portraits are quietly taken in public places.

Through the faces, Amore noted, “I feel connected to the sense of each of us as part of a larger whole, one human family.”

About a decade ago, a discarded Con Edison work glove lying on the street caught Amore’s eye. She picked it up, exactly as she found it, infused it with resin to preserve its shape. Found gloves — she has hundreds if not thousands in her Benson studio, where she also has her stone and metal — take on new life in her hands. She paints them with layers of resin to harden then finishes them with acrylic or bronze. Like the faces, they have their individual human touch, but also unexpected forms.

Amore’s “Arc of Healing Hands,” currently underway, is composed of gloves from known glove-wearers — medical professionals and staff at Tufts Medical Center who cared for her through a rare blood disease. The completed piece, which will include poems and text as well as the arc will be displayed at Tufts.

“Part of the magic of B. is her ability to get people involved in the causes and the items of interest to her… B. has this ability to get people to stop for a second and think about the things that she’s trying to get across with her work, so that in that 20 or 30 minutes that people are dealing with her work in person, or, maybe online, it becomes something of importance to them as well,” explained Mark Waskow, art collector and founder of the Northern New England Museum of Contemporary Art, who has long familiarity with Amore’s work and owns several of her pieces.

For more about B. Amore, go online to www.bamore.com