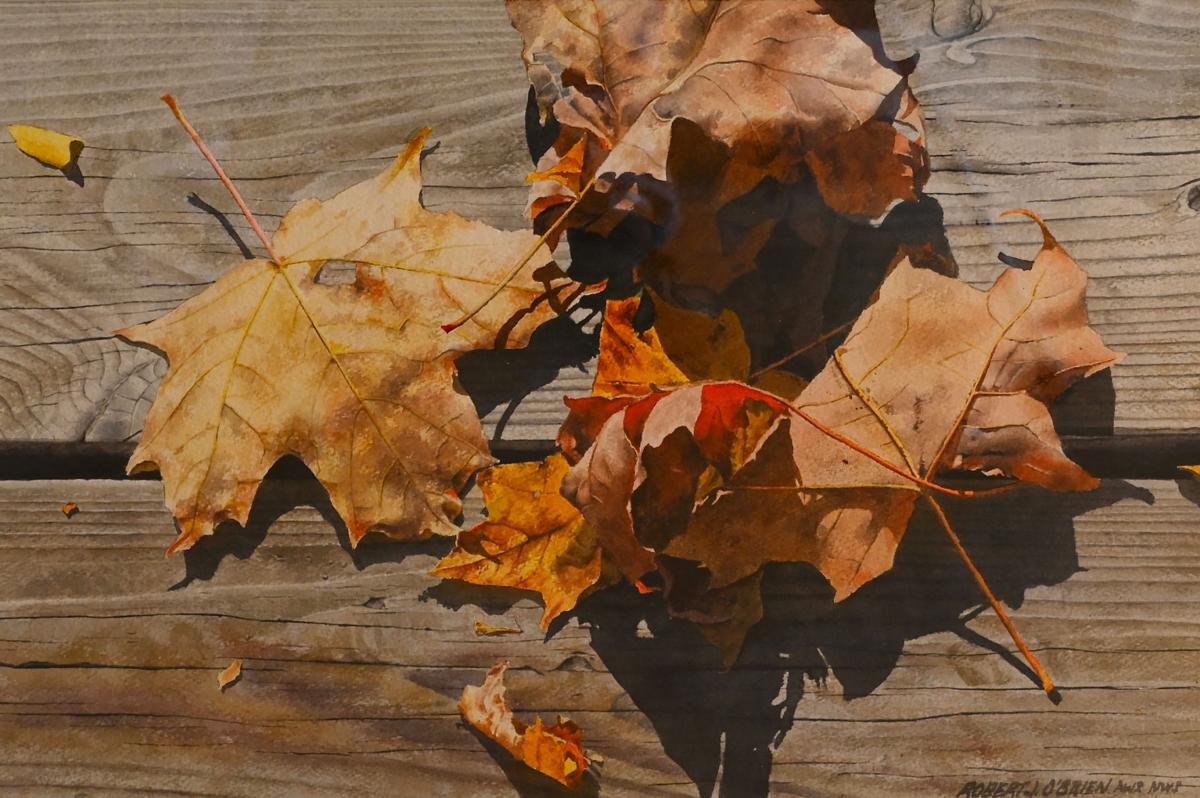 Artist Robert O’Brien won Best In Show for “Leaves on My Porch” at the Vermont Watercolor Society Annual Fall Awards Exhibit, currently up at the Chaffee Art Center in Rutland. 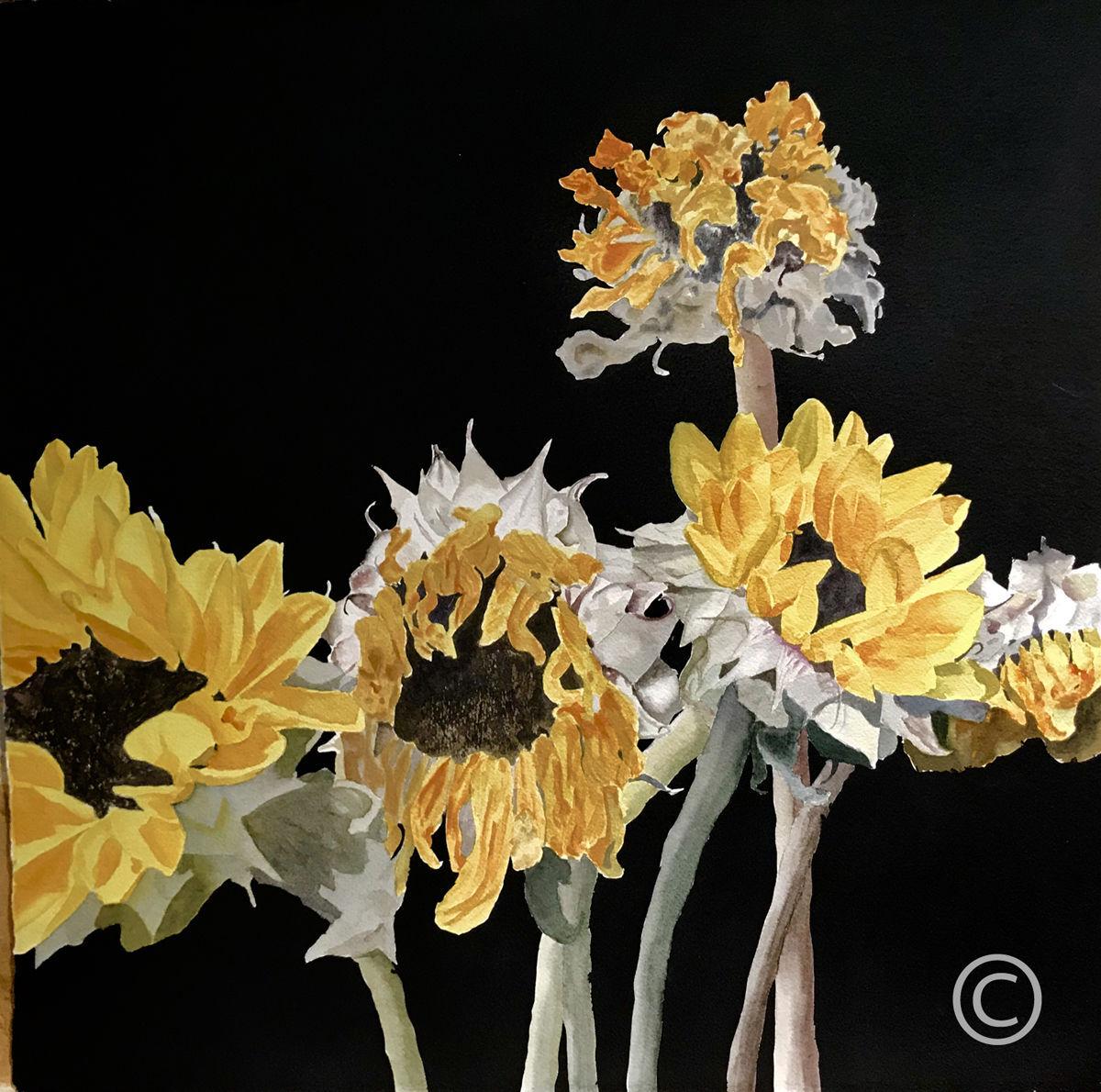 Martin LaLonde’s “Not All That Glitters” won third prize. 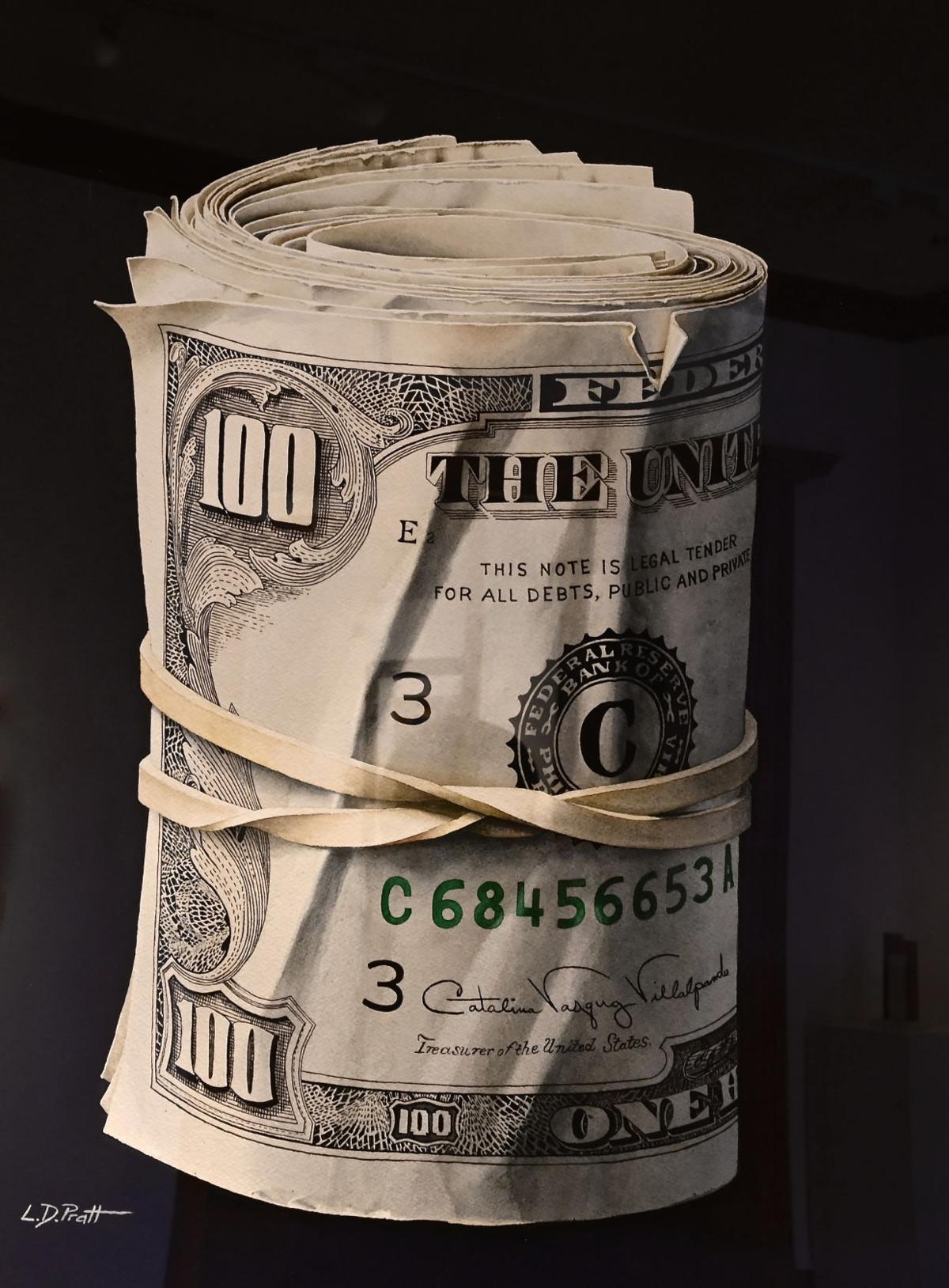 Lynn Pratt’s “This Is How I Roll” won the Dorothy Yoder Memorial Award for Innovative and Experimental Technique prize.

Artist Robert O’Brien won Best In Show for “Leaves on My Porch” at the Vermont Watercolor Society Annual Fall Awards Exhibit, currently up at the Chaffee Art Center in Rutland.

Martin LaLonde’s “Not All That Glitters” won third prize.

Lynn Pratt’s “This Is How I Roll” won the Dorothy Yoder Memorial Award for Innovative and Experimental Technique prize.

Sometimes you don’t have to go very far to find inspiration.

It’s in the man with the expressive face resting on a couch beside a cat; the almost tropical-looking, deep pink flowers in bloom; the scattered birch trees with a layer of fir trees behind them, and a mountain range as the backdrop.

What they all have in common is that they are among the juried watercolor paintings by members of the Vermont Watercolor Society, currently on exhibit at Rutland’s Chaffee Art Center. The society’s annual Fall Awards Exhibit is up through Oct. 30. And the sort of unspoken theme is: Sometimes you don’t have to go very far to find inspiration.

“In Vermont you just step out your door and notice things in a different light,” said artist and society member Robert O’Brien. “No wonder artists like living in this state.”

The Vermont Watercolor Society is a 200-member statewide organization divided into four regions called hubs. Each hub offers the opportunity to meet with other members to paint and exhibit, as well as workshops with renowned artists, and take part in the spring and fall shows for which involve a jury process.

“It’s a really good group and we welcome painters of all levels of ability,” said Jean Cannon, the society’s exhibitions director, and a member since 1998. “There’s something for everyone.”

The current exhibit was limited to Vermont artists, which juror Mickey Myers says is “further evidence of the vast amount of talent and hard work that takes place in the arts in Vermont.”

“What was common about everything I was drawn towards was that in some way, it depicted intimacy,” said Myers, who has been an executive director at various Vermont art centers for 20 years, including the Helen Day Art Center in Stowe. “The intimacy between a person and an animal, or between the viewer and an inanimate object, they all depicted an intimacy I felt I needed.”

“In addition, all the pieces are extremely well painted, very well composed, all of those things that you expect your prize winners to be,” Myers said.

Cannon says the society doesn’t have a brick and mortar home base, so the annual awards show is held at various venues around the state.

“It’s a fantastic show,” she said. “It’s our awards show so people have put their best stuff in there.”

Her painting “Canal Street” isn’t a New York City reference, rather the view from home in downtown Bellows Falls.

“I do architectural subjects,” Cannon said. “I love peeling paint and old buildings.”

Watercolor artist Kathaleen Giurtino from Chester is behind the bright pink hollyhocks, which she painted plein air (outdoors), and says the society offers a lot of opportunities that you wouldn’t necessarily find on your own.

“It’s a wonderful group of people,” Giurtino said. “There’s some incredible artists in the group, and to be around people that are so experienced, it’s all part of the growth. And you network a little, you find out about this workshop or that magazine or this article, and it expands your knowledge base.”

“I didn’t feel I could join until I at least started watercolors,” Giurtino added, “and I was sorry afterwards that I took so long to get around to it.”

O’Brien is a member of watercolor societies all across the country. He has over 20 years of experience, exhibits, mentions in magazine articles, calendars and awards.

His painting “Leaves On My Porch” won Best In Show, and he described his process saying, “I work in the traditional method of watercolor painting, which is light to dark.”

“I start with washes,” O’Brien explained, “large areas of paint that are basically one color. And I use a layering process. Watercolor is a transparent medium so as you layer upon layer you’re able to see the color underneath; it still kind of comes through and affects the color you put over it. My shadows and dark colors tend to go towards the end of the painting, and the detail does as well.”

“I just stepped out my front door and looked at my porch and saw these leaves in this particular pattern and said this needs to be painted,” he said of his winning piece. “Sometimes you don’t have to go very far to find inspiration. I’m always on the lookout.”

The Chaffee Art Center presents the Vermont Watercolor Society Annual Fall Awards Exhibit at 16 S. Main St. in Rutland. Hours are: noon to 4 p.m. Thursday and Friday, and by appointment; call 802-775-0356, or go online to www.chaffeeartcenter.org For more information about the Vermont Watercolor Society including how to join, visit www.vtwatercolor.org